This week’s installment of Ten Questions features Carey Salerno, whose second poetry collection, Tributary, is out today from Persea Books. Tributary is full of questions and rich contradictions. In an early poem, Salerno writes: “River, what are you? / River I drink from. River in which I drown.” Using the river as a guiding metaphor, she searches for a better understanding of family secrets, religion, whiteness, and other concerns. She palms her subjects like river stones, turning them over and over until they are both more familiar and unfamiliar. “In poem after poem, Salerno layers thought after thought onto the river until it overflows,” writes Victoria Chang. “Dexterous, relentless, and edifying, these are exploding and gorgeous poems of unapologetic rebellion.” Carey Salerno is also the author of Shelter (Alice James Books, 2009). The executive director and executive editor of Alice James Books, she coedited the anthology Lit From Inside: 40 Years of Poetry From Alice James Books. She is a graduate of the MFA program at New England College and teaches at the University of Maine in Farmington. 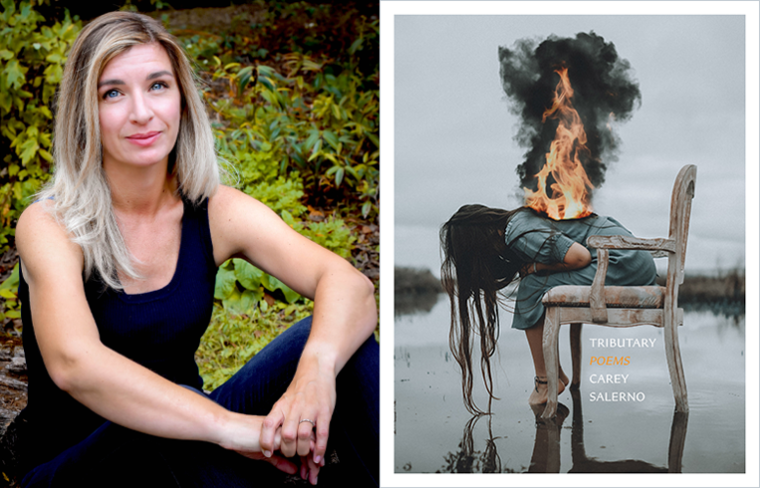 1. How long did it take you to write Tributary?
The first poems for Tributary came about, in earnest, around the fall of 2016. They crept onto the page while I was feeling blocked trying to wrap up a wholly different manuscript. There were just a few poems, but I remember feeling ready to follow where they were leading me. Their conversations were burrowing in my body, or perhaps stirring from their deep burrows! I guess that makes the collection almost five years in the making. It seems like it went by a lot more quickly than it did.

2. What is the earliest memory that you associate with the book?
Deep summer in rural Michigan, playing in the sun-scorched grass with my older sister. We were swinging from the swings my father hung for us, having drilled them into the nearly horizontal bough of, what seemed at the time, a pretty mighty oak tree. He’d later hung a deer, slashed open from neck to tail from another branch before us, but we still swung, making a game out of trying to clap our feet together on the other side of its body without touching it. It’s gruesome and red death-y thinking about it now, but at the time we didn’t see it that way at all. We just made a game of it.

3. What was the most challenging thing about writing the book?
This is such a great question, and I don’t know that I have just one answer. Writing into these subjects was so opaque at first. I didn’t know where I would end up. I didn’t know what I was going to say—that was a challenge. I often worried what would come out would be scary, accusing, not close enough to the truth or too close. In terms of probing whiteness, patriarchy, religion, and other systems of violent power, I’m writing about systems that, to many degrees, protect me in ways that I can’t always readily distinguish, so how do I know if I’m using that same system to protect myself as I move through my poems? How do I know if I’m resisting self-incrimination, self-examination, self-acknowledgment, awareness, culpability? These systems taught me to avoid these things, to approach power with silence, gratitude, and acceptance, because they often don’t need to be spoken to or dealt with—just paid tribute to. Everything is set up to prevent the “dealing with” entirely, so how, as a product/beneficiary of these systems, do you interrogate them without using what you’re conditioned by them to use?

4. Where, when, and how often do you write?
It’s so sporadic. I want to be real with anyone reading this: No one writes like you do! Everyone does it differently. Everyone has their own process, unique unto them. I say this because I spent a lot of time comparing myself to others—and being compared to others, contemplating these comparisons, judging myself against them. Why wasn’t I as prolific as __________? Why didn’t I have a daily “practice.” When I write, I write intensely for weeks at a time for a few years at a time and then there’s drought—serious drought. That used to make me very uncomfortable, but now I just try to see it for what it is, knowing that the writing always comes back because it’s part of who I am, not because “it seems to be about time for another book.”

5. What are you reading right now?
The answer to this is always “lots of poetry manuscripts,” but outside of my editorial life, my jam is historical nonfiction. I’ve been savoring The Splendid and the Vile for too many months now just because I’m completely enamored by the way in which Erik Larson can spellbindingly storytell history. I’m reluctant to finish it. Also, Unworthy Republic by Claudio Saunt, and for poetry: Doppelgangbanger by Cortney Lamar Charleston, Embouchure by Emilia Phillips, and Prometeo by C. Dale Young. I spend a lot of time dreaming about when I’ll reread Hari Kunzru’s White Tears as well, which is probably one of the best books I’ve ever had the pleasure to read.

6. What is the biggest impediment to your writing life?
Ha, well, myself... in relation to work and motherhood. Because I’m so deeply invested in these areas of my life that call for concentrated and persistent effort, personal responsibility, and commitment, they just take precedence over what I see as “something for me,” which of course isn’t really true at all, except for the fact that the only one who I am certain is counting on/thriving off of the writing is me. Whereas with my work at Alice James and being a parent, I see, more ostensibly, the results of my efforts and dedication and how they benefit people. I feel really deeply the call to be in service of others, I guess is what I’m saying, and I’m also saying that it’s hard for me to switch that call off and attend to my writing or even other pursuits and passions.

7. What is one thing that surprised you during the writing of Tributary?
The music. The formal variation. All of it really. This book was such an act of discovery in its writing in terms of really utilizing form to embody/evoke emotion. I never set out to do that, but the mechanism found me along the way, and it definitely took me by surprise to be writing what felt like little songs, incantations, longer poems, interludes. I’m really grateful, even if at the time I was terrified by it, that I listened to the poems, followed where they wanted to go, and relaxed into them without my editorial self swooping in to try to “arrange” the chaos I initially perceived.

8. Outside of writing, what other forms of work were essential to the creation of the book?
Music, absolutely. Music from my teen years and especially the compilations of albums like Radiohead’s Kid A, Outkast’s ATLiens, Wu-Tang Clan’s Wu-Tang Forever, DJ Shadow’s Endtroducing, and then later, Kendrick Lamar’s Damn. These albums are, of course, composed of individual songs, but the order, placement, conversations between, and formal variation of each tells a great story over the album’s course through the lyrical experimentation, interjections, backmasking, register changes, and so on. I’ve always been deeply engaged by this type of creative expression, musically challenged as I am. And, too, the work calls to Jean Valentine, Marie Howe, Claudia Rankine, and Monica A. Hand.

9. Who is your most trusted reader of your work and why?
This is an easy and hard question to answer, because handing my work over to anyone, I realize, fills me with an enormous sense of guilt, as if I’m burdening that person. We are all so overworked! I’ve had so many people be incredibly generous to me over the years, offering to read things when I have them, and I so rarely take them up on it for fear of adding to their plates. That said, a dear friend and mentor of mine for nearly all my writing life, Anne Marie Macari, is my person. She’s a generous reader, and I know she’s a sounding board for more writers than just me, which makes the attention and care she gives my work all that more extraordinary. Our friendship is a rare gift. She’s also a writer I find myself turning to over and again. Have you ever read her book Gloryland? It’s just a complete masterpiece, as is her new book Heaven Beneath.

10. What’s the best piece of writing advice you’ve ever heard?
“Just write” is a simple piece of advice I carry with me always. Just write it. Write it down. Write without judgment or worry about the “final” outcome or where the poem/words will take you. Don’t think too far ahead of the poem you’re in. This advice was especially useful after I became a mother. I feel indebted to Nicole Cooley, who told me she would just write a few words or a line or two on any surface she could when she was a new mom, and that the poems found their way to doing the work they needed to do eventually. That opened doors for me to see the act of writing as a malleable thing. It was really empowering.

“There’s something sort of final and fulfilling about discovering, say, that a poem’s floor is also its ceiling.” —Justin Jannise, author of How to be Better by Being Worse

“Do the hard stuff first.” —Kaitlyn Greenidge, author of Libertie