This week’s installment of Ten Questions features E. C. Osondu, whose second story collection, Alien Stories, is out today from BOA Editions. In Alien Stories, Osondu transports readers into landscapes that feel at once futuristic and all too familiar. “Memory Store” imagines a world in which people can exchange their memories for money. In “Feast,” a community gathers to celebrate the hanging of an alien. Osondu takes these dark premises and inflects them with wit and irony. In doing so, he elucidates both the pain and power of immigrants and people of color, of any person or extraterrestrial who has been othered. E. C. Osondu is also the author of the story collection Voice of America (Harper, 2010) and the novel This House Is Not for Sale (Harper, 2015). His writing has appeared in numerous publications, including the Atlantic, Guernica, Kenyon Review, Lapham’s Quarterly, McSweeney’s, and Zyzzyva. He is the recipient of the Caine Prize for African Writing and the Allen and Nirelle Glaso Prize for Fiction, among other awards. A graduate of the MFA program at Syracuse University, he lives in Rhode Island and teaches at Providence College. 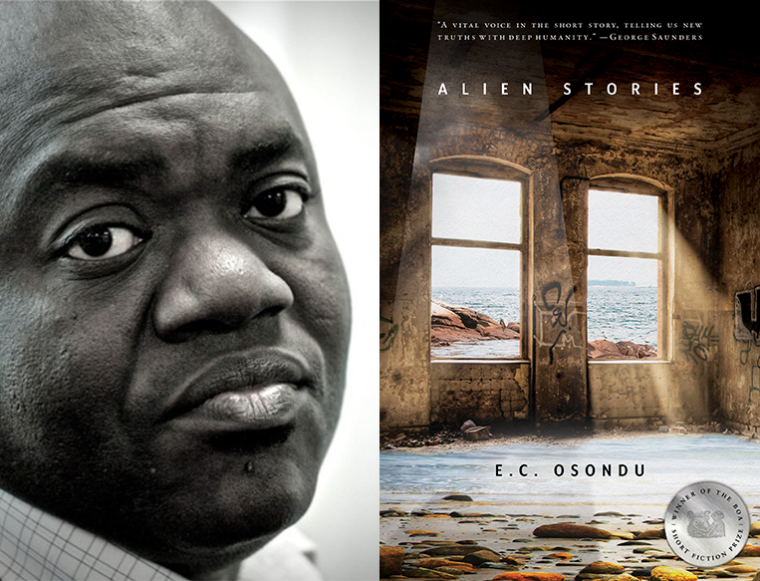 2. What was the most challenging thing about writing the book?
It was all fun and games until I realized that I was actually writing a book. Before that I was just writing short stories as they came to me. When I realized that this could well be shaping up into a book, I figured that it needed an organizing principle or some kind of scaffolding but should not run the risk of being formulaic. I had also given myself the task of never writing any story that reads even remotely like a story from my previous collection. One of the greatest things about the legendary Afrobeat musical maestro Fela Kuti was his insistence on never performing any of his songs again once they have been released as an album. So as you can see I was meandering and juggling around a bunch of tall orders.

3. Where, when, and how often do you write?
To be completely honest, I am always not not writing. For me writing is much more than the proverbial putting pen to paper. I am always in a writing mode, so to speak. Writing mode might include reading a book, a magazine, author interviews, profiles, short stories in online magazines, and so on.

In my past life or once upon a time long ago, I was an advertising copywriter and one of the things that was often repeated in the agency was the need for creatives to always be in a creative mode. It was said that when one is in a creative mode, two flies perched on a windowsill could inspire a great copy idea for a TV commercial.

When I am reading widely and in creative mode, I find that the writing itself comes in short feverish bursts of blooming, satisfying creativity.

4. What are you reading right now?
Map: Collected and Last Poems by Wisława Szymborska—I find poetry to be a great palate cleanser.

5. Which author, in your opinion, deserves wider recognition?
Most, if not all, African writers deserve more space. Right now the literary table reserves one seat for African writing. It is an approach that I call “the one bright morning star” approach. This simply means that only one African writer can be acclaimed and read and celebrated and venerated and even canonized, at a time. There seems to be more space for others than African writers. Look at the generation of writers in Britain referred to as the Angry Young Men, or the generation of British writers that produced Amis, McEwan, Rushdie, Ishiguro, Timothy Mo, and even nominally Hitchens. Or the Language Poets. Or the New York School made up of Ashbery, Guest, O’Hara, Brainard. You see the plurality? As I had cause to say in a different context—we are legion. You know, there is an African proverb that sums up all I have been trying to articulate ever more succinctly: The sky is wide and spacious enough for every bird to fly without crashing into each other or knocking the other down.

6. What is the biggest impediment to your writing life?
James Baldwin once said, in his inimitable way, “I want to be an honest man and a good writer.” I find that both impulses come from two totally different places. The task is to find the secret to being both.

7. What is one thing you might change about the writing community or publishing industry?
Many more writers deserve to be published. Publishing appears to grow more risk-averse by the year.

8. If you could go back in time and talk to the earlier you, before you started Alien Stories, what would you say?
Writing a book is like having a wild and vivid and amazing dream, but while in the dream a part of you is second-guessing and asking yourself, When I wake up and tell people of this dream are they even going to believe that I had a dream this magical? So I would say to myself, Someone is going to believe in my dream no matter how outlandish. Just keep plucking that chicken, as someone once said.

9. Who is your most trusted reader of your work and why?
I often share story ideas with friends and family even before I write them. I would usually start with “What if?” and then watch their faces.

10. What’s the best piece of writing advice you’ve ever heard?
I will mention two. The first is to lean on your strengths as a writer instead of focusing on your weaknesses. I believe I first heard this from George Saunders at Syracuse. I am not certain, but it does certainly sound Saundersesque. I have run with it since then.

The other is from something the Swedish poet Tomas Tranströmer once said to someone I know but in a totally different context. He said when you are walking towards the Great Sphinx of Giza from behind, it looks like a random collection of stones, but if you approach it from the right direction, you realize it is a great work of art. If your writing is looking like a random collection of stones, at any moment, it may be because you are approaching that particular piece from the wrong angle.

“I often worried what would come out would be scary, accusing, not close enough to the truth or too close.” —Carey Salerno, author of Tributary

“There’s something sort of final and fulfilling about discovering, say, that a poem’s floor is also its ceiling.” —Justin Jannise, author of How to be Better by Being Worse