This week’s installment of Ten Questions features Monica West, whose debut novel, Revival Season, is out today from Simon & Schuster. Miriam Horton is the daughter of a Black Baptist preacher known for leading packed revivals—gatherings to inspire religious conversion—across the American South every summer. She is devoted to her father, in awe, especially, of his apparent miraculous power to heal the sick and injured at the end of each service. But after witnessing her father lose control and act out in violence, on more than one occasion, she begins to question him and all his teachings. Meanwhile, she discovers her own healing power and increasingly chafes at her exclusion from the ministry as a young woman. Revival Season is a sweeping novel about the pains of disillusionment and finding the courage to speak one’s truth. “Compact, suspenseful, and written with incredible elegance, Revival Season is a highly rewarding, utterly original read—one of my favorite debuts of the year,” writes Jami Attenberg. Monica West is a graduate of the Iowa Writers’ Workshop, where she was a Rona Jaffe Graduate Fellow. She received her BA from Duke University and her MA from New York University. She has also earned a fellowship from Kimbilio and a residency from Hedgebrook. Born and raised in Cleveland, she lives in Oakland. 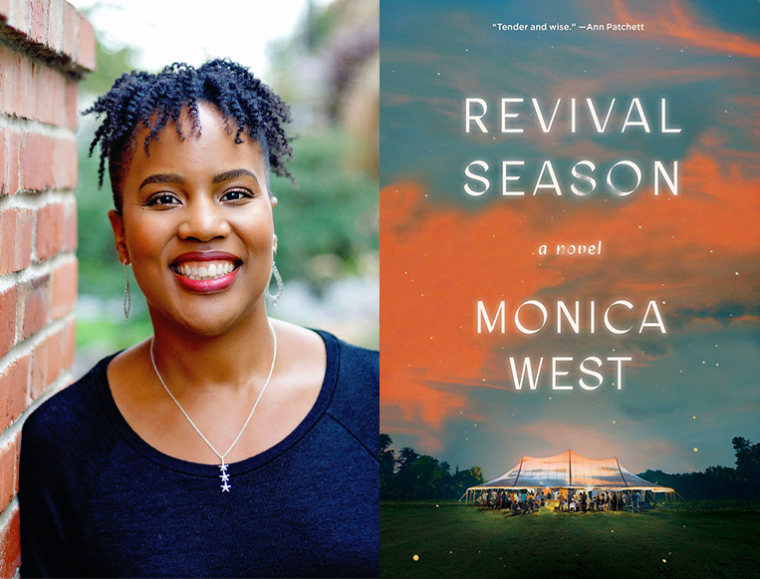 1. How long did it take you to write Revival Season?
Nine years total. It took three years to research it and complete a first draft. During the next six years—including two in Iowa—I rewrote, revised, and edited it more times than I can count.

2. What was the most challenging thing about writing the book?
The most challenging aspect of writing this book was the process of holding multiple different novel threads in my brain simultaneously. There were so many characters, dates, timelines, plotlines, geographies, character arcs, flashbacks, and backstories that I had to be aware of in order to refer to them in a consistent way throughout. And then I made that task even harder for myself because I didn’t physically outline it until really late in the process.

3. Where, when, and how often do you write?
I write every day from my living room. I know that a lot of people can’t work at home, but I get distracted by other people when I’m in coffee shops or other public spaces. My writing hours are different depending upon other daily responsibilities—teaching, meetings, and so on—but I like to start in the morning around 10 AM. I set out to write one thousand words each day on my nonteaching days and five hundred words on my teaching days. I don’t have a set number of hours that I work each day, but I don’t let myself stop until I complete my goal. Sometimes that goal takes three hours to complete, but other times it takes ten.

4. What are you reading right now?
Purple Hibiscus by Chimamanda Ngozi Adichie. Several readers have compared Revival Season to it, and though I’ve read many of her other books and short stories, I’ve never read this one. So now seems like a great time to read it.

5. Which author, in your opinion, deserves wider recognition?
I loved Lesley Nneka Arimah’s What Happens When a Man Falls From the Sky. I read the story “Who Will Greet You at Home” when it was first published in the New Yorker, and when the entire collection came out I devoured it. I adore her strong characters and the lushness of her worlds.

6. Would you recommend writers pursue an MFA?
Getting my MFA was one of the best decisions of my life, primarily because it gave me the time and space to write the novel. I had never made writing a priority before because work got in the way, so an MFA was ideal for that reason. It also gave me an amazing community of other writers who not only workshopped my fiction but also became great friends. Even though an MFA was exactly right for me, the programs are not for everyone. Pursuing an MFA is a highly personal decision, and each writer should figure out what makes sense for them and what they need. After evaluating all of that information, they should decide if an MFA is worth the time and potential expense.

7. What is one thing that your agent or editor told you during the process of publishing this book that stuck with you?
My editor told me from the beginning that “everything is a conversation.” It put me at ease to know that if we had a disagreement about something editorial, we could talk about it. I used to think that the editorial process was that the editor told you what to fix and you had to fix it; Carina disabused me of that notion in our first conversation. Though I agreed with her about almost all of the edits, we had conversations about other ones that were truly dialogues.

8. What, if anything, will you miss most about working on the book?
I will miss these characters living in my head, miss the way that I kept thinking about how they interacted with each other or what they would say to each other. They have been with me for years, so even though I’m glad that I’ve finished writing the novel and have written the entire story that I intended to in the book, I will miss them dwelling with me every day.

9. Who is your most trusted reader of your work and why?
Margot Livesey is a sharp, precise reader who gets right at the heart of what’s working and what needs work in my fiction. She is also generous with her time and her feedback. She gave me some great advice about the book early on, and I trust her judgment about my writing.

10. What’s the best piece of writing advice you’ve ever heard?
“Write what you can.” Paul Harding gave me this advice after I had received a ton of feedback on the first draft of Revival Season during my first semester at Iowa. I didn’t know how I would start revising based on everything I’d just heard in workshop. Paul’s advice gave me the permission to start with what I knew I could do. Maybe I couldn’t figure out the ending yet, but I knew that I could write a specific scene, even if it was out of order. That advice got me through every revision.