This week’s installment of Ten Questions features Andrew Durbin, whose novella, Skyland, is out today from Nightboat Books. Written in the form of a diary, Skyland begins in New York City, where the narrator is preparing to depart to Greece in search of a lost portrait of the writer Hervé Guibert. The narrator is planning a biography of sorts—more accurately, “a literary map of [Guibert’s] personality”—and hopes finding the rumored painting might give him some new sense of the author: “The way he might have really lived, the expressions he made, the way he set his mouth.” On the island of Patmos, the writer and his friend Shiv enjoy the beach as much as they search for the painting itself, but while they bake in the sun and seek out casual sex, they become increasingly aware that the island’s idyllic appearance masks an uneasy conservatism. While documenting the details of everyday island life—memories of sun-kissed men, food, and friendship—Durbin equally draws attention to the refugee crisis and the global rise of fascism against which the characters’ movements unfold. “Gusty, luminous, elegiac, and unexpectedly moving, Skyland is a languidly-paced meditation on the fecundity of objects (be they imagined or finally discovered) and a quietly hedonic seaside travelogue,” writes Harry Dodge. Andrew Durbin is also the author of MacArthur Park (Nightboat Books, 2017) and Mature Themes (Nightboat Books, 2014). His writing can be found in numerous publications, including BOMB, Boston Review, Triply Canopy, and the Paris Review. He lives in London, where he works as the editor of frieze. 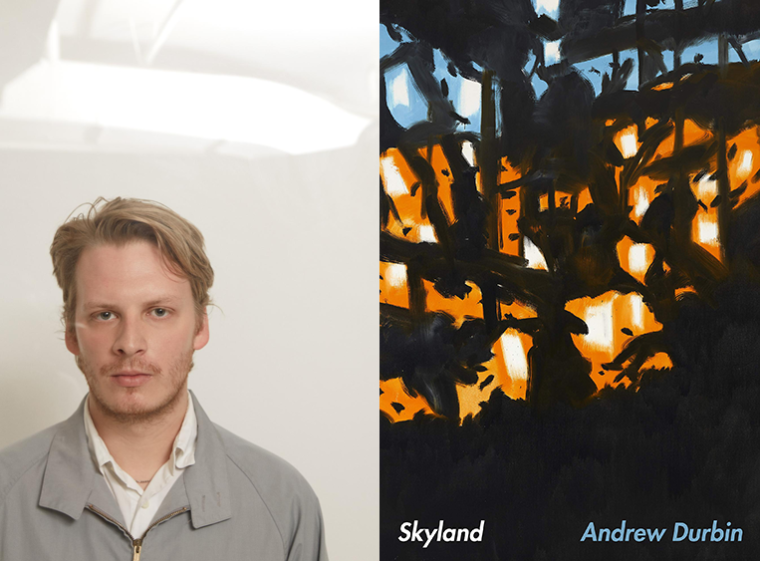 1. How long did it take you to write Skyland?
In late 2017 the British magazine Tinted Window asked me to adapt a portion of my diary as a short story for their inaugural issue, which was devoted to the work of Hervé Guibert, the French novelist and photographer. Though I was happy to do it, the story never felt complete to me, so after it was published in the United Kingdom—where I now live—I set it aside. About a year later, in early 2019, Stephen Motika of Nightboat Books encouraged me to revisit the story and expand it into a novella. In all, about two and a half years.

2. What was the most challenging thing about writing the book?
The sentences.

3. Where, when, and how often do you write?
I write almost every day, usually in the early mornings and then again in the evenings. I tend to devote most of Sunday to writing too, and that’s usually my most creative period.

4. What are you reading right now?
George Eliot’s Daniel Deronda, which is one of the most entertaining books I’ve ever read. I’m always surprised by the kind of humor and lightness she can achieve, even at her densest. I’ve recently discovered Denise Riley, whose Selected Poems is on my bedside table. Also, Yoko Ogawa’s Hotel Iris. During the lockdown, I zipped through all of Ogawa’s books translated in English. Her novel The Memory Police perfectly encapsulates the feeling of the world disappearing around you, something I keenly related to this past spring.

5. Which author, in your opinion, deserves wider recognition?
Hervé Guibert, the French novelist and photographer at the center of Skyland. Thankfully, a collection of his short stories and a reissue of his novel To the Friend Who Did Not Save My Life have been published this year by Semiotext(e). His work is endlessly inspiring to me. But I can’t limit myself to just one. The work of poets Diana Hamilton, Harmony Holiday, and Shiv Kotecha always thrills me.

6. What is one thing you might change about the writing community or publishing industry?
More translation—and more trust that translated literature can succeed in the United States. There are so many great books and authors English-language readers, particularly Americans, are missing from Latin America, Africa, and Asia. I think that would change if we empowered more multilingual editors, more editors of color, more editors from outside the U.S.

7. What trait do you most value in your editor (or agent)?
Care.

8. If you could go back in time and talk to the earlier you, before you started Skyland, what would you say?
You’ll get there.

9. Who is your most trusted reader of your work and why?
Stephen Motika, the editor and publisher of Nightboat Books. I have never had a more watchful eye over my work than his. I’m not sure where I would be without him.