This week’s installment of Ten Questions features Emily Temple, whose debut novel, The Lightness, is out today from William Morrow. High up in the mountains at a place known as the Levitation Center, sixteen-year-old Olivia is searching for answers. One year ago, her father, a dedicated Buddhist, traveled to the center and never returned. Olivia knows he’s probably long gone—off at another retreat or temple or community—but she enrolls in the center’s special summer program for teens all the same. “I thought that if I learned this place, I would also learn him,” Olivia says. “That I too might be transformed. Into what exactly, I didn’t know. Something new and pink-skinned, fresh and holy: a girl worth coming back for.” Shortly after camp begins, she bonds with a trio of girls—Serena, Janet, and Laurel—and the four set out with unique determination to learn the elusive skill of levitation. In tracing their pursuit of this perilous practice, Temple tells a mercurial tale of girlhood, love, and faith. “This remarkable novel is made up of equal parts desire and dread; it constantly surprised me, eerily outpacing my expectations,” writes Garth Greenwell. “The Lightness is a glorious debut.” Emily Temple’s fiction has also appeared in Colorado Review, Electric Literature’s Recommended Reading, Indiana Review, No Tokens, and other publications. A graduate of the MFA program at the University of Virginia, she is the managing editor of Literary Hub and lives in Brooklyn. 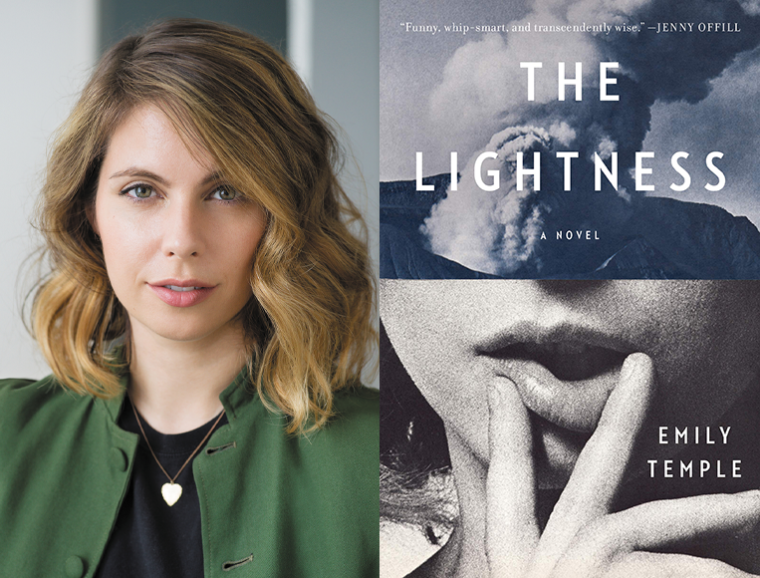 1. How long did it take you to write The Lightness?
About five years, all told. It began as a short story in the spring of 2014, and I spent the next year expanding it into a novel for my MFA thesis. We sold it in 2018, and edits took about a year.

2. What was the most challenging thing about writing the book?
Sorting out the plot. I experience literature most acutely at the level of the sentence, and that’s where most of my interest is as a writer, too. So it took me a relatively long time to figure out how to herd my characters from A to B—they just kept stopping to look at stuff and make snarky comments to each other. They still do a fair bit of that, to be honest.

3. Where, when, and how often do you write?
I write in bed, in the mornings before work and on the weekends. I try to write every day when I’m deep in a project, but it’s also my policy to let myself off the hook if I can tell it’s not going to be a productive day. If I stare at the page for an hour and nothing good is happening, I get to close the computer and read instead. I always write better from a place of joy than I do from a place of discipline, and joy can’t be manufactured.

4. What are you reading right now?
Octavia Butler’s Parable of the Sower.

5. Which author, in your opinion, deserves wider recognition?
Diane Cook! She’s already a beloved writer’s writer, but she should be a household name. The same is true for Mary Robison.

6. What is the biggest impediment to your writing life?
All the usual things: money, time, myself, and the nonstop attention-seeking of the world around me.

7. What is one thing that your agent or editor told you during the process of publishing this book that stuck with you?
My agent taught me the following, without ever saying it in quite these words: When in doubt about an element, just cut it—you can always stick it back in later, but probably you’ll realize you don’t miss or need it, and in the end, you’ll be left with nothing but what’s essential to the book. By the time I submitted the novel for the last time, I realized that I had cut more than three times the number of pages I wound up with in the final draft.... Don’t worry, I still have them all.

8. Would you recommend writers pursue an MFA?
It depends on the writer, but in general, I would say yes—if you are lucky enough to get full funding and a stipend. If you have to pay, it’s not worth it. Unless you’re rich, I guess! Then you should probably go to Columbia. For me, the most valuable thing the MFA did was plop me down and tell me to take myself seriously as a writer, which it did over and over again for two years. It worked—but not too well, I hope.

9. Who is your most trusted reader of your work and why?
Both my agent and my editor have been enormously helpful and have made this book a million times better with their careful reads and useful suggestions. But at the end of the day, I’m my own most trusted reader. You have to be—it’s the only way to get to the finish line.

10. What’s the best piece of writing advice you’ve ever heard?
Robert Frost wrote: “No tears in the writer, no tears in the reader. No surprise for the writer, no surprise for the reader.” I keep that written on a little card tucked into my mirror. In the same essay, he wrote that “a poem begins in delight and ends in wisdom.” That part isn’t actually advice, of course, but it is also what good novels—and stories and essays—do, and I always strive to achieve it.

“I have a deeply unhealthy work-life balance in that the Venn diagram of those things is a circle.” —Ilana Masad, author of All My Mother’s Lovers