This week’s installment of Ten Questions features Ilana Masad, whose debut novel, All My Mother’s Lovers, is out today from Dutton. Twenty-seven-year-old Maggie Krause has a complicated relationship with her mother, Iris, who seems to disapprove of her daughter’s androgyny and queerness. But when Iris dies unexpectedly in a car crash, Maggie begins to realize there’s a lot about her mother that she misunderstood. After flying home to assist her father and younger brother with the funeral, Maggie finds that her mother’s will is accompanied by five letters addressed to mysterious men. While her father and brother sit shiva, she sets out on a road trip to deliver the letters and find out what secrets they might keep. As more details of her mother’s life emerge—and the illusion of her parent’s perfect marriage shatters—Maggie must make decisions about what to share with her father and brother, all while juggling her own first relationship. “Ilana Masad’s debut is a queer tour de force,” writes Kristen Arnett. “A tender look at love, relationships, motherhood, and how we oftentimes hurt the people we love most with our silence.” Ilana Masad’s writing can also be found in the New York Times, the Washington Post, Catapult, StoryQuarterly, and the Paris Review Daily. She is the host of The Other Stories podcast and the assistant nonfiction editor for Prairie Schooner. A graduate of Sarah Lawrence College, Masad is pursuing her doctorate at the University of Nebraska in Lincoln. 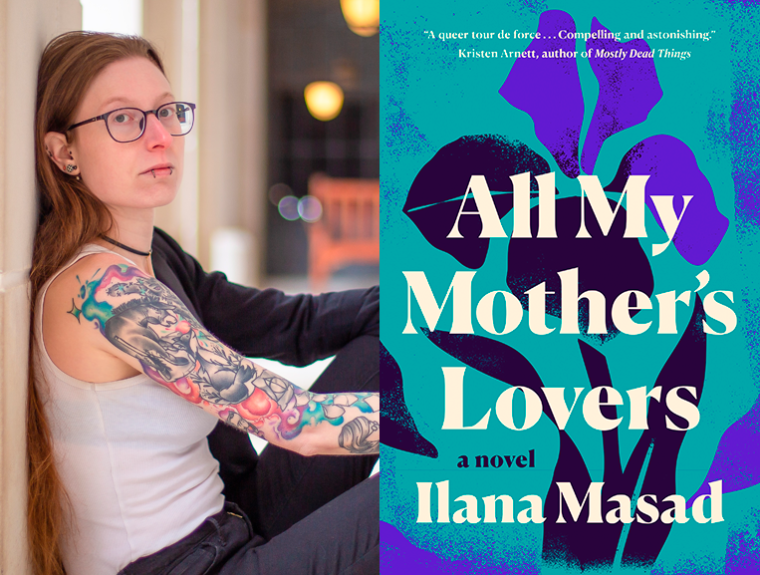 Ilana Masad, author of All My Mother’s Lovers.

1. How long did it take you to write All My Mother’s Lovers?
About a year, from the time the characters started rattling around in my brain to when I finished editing it to my own satisfaction. Another six months if we add in edits for my agent and editor. In terms of time spent actually writing during that period? Probably three to four months. I wrote the first half during November 2017, I think—using NaNoWriMo as a way of kicking my ass into gear has always been useful for me—and then wrote for another four weeks in the summer of 2018 during a residency. I rounded out the first draft with a two- or three-week push during October of the same year, let the manuscript sit for a month, and then edited it during December. In between, I was thinking about it a lot, which counts—I think? I hope?—but I wasn’t actively sitting down with it every day.

2. What was the most challenging thing about writing the book?
I’m not sure. It’s a strange exercise, trying to look back at a process that felt alternately thrilling and agonizing in order to pinpoint its most challenging element. I think writing my way through the middle of any project is a drag. There’s this middle third, or maybe even a goodly half—after the first quarter and before the final quarter—where everything just sucks. I don’t know whether my characters are believable anymore, I feel like the plot is a total mess, and there’s a sense of such deep doom and gloom over the whole thing that it feels like I’m willingly dropping myself into a muddy pit without a ladder every time I sit down to write. Since I also wasn’t working on the book consistently due to school and work, I left part of myself down in that pit during the longish breaks I took. But this isn’t the first novel I’ve written—only the first I’ve sold—so I knew that I’d eventually find my way out of that soul-sucking muddy middle area if I stuck with it.

3. Where, when, and how often do you write?
I write every day. So do you, I’d wager. I text and I e-mail and I tweet and I WhatsApp and I write papers and I grade and I make to-do lists and maybe journal and possibly write an article or review or listicle or newsletter for work. I do those things anywhere I have my phone or computer with me, because like many people, I have a deeply unhealthy work-life balance in that the Venn diagram of those things is a circle.

Where, when, and how often do I write creatively? Wherever, whenever, and as often as I can, to be honest, which isn’t saying as much as I’d like, because the reality is that I don’t prioritize creative work nearly as much as I wish I would or could, nor as much as I believe I should. Which is to say, I suppose, that I don’t have particular rituals nor any healthy or actionable habits that I keep to.

4. What are you reading right now?
A wonderfully strange mix of things! In Praise of Paths: Walking Through Time and Nature by Torbjørn Ekelund, translated by Becky L. Crook, which I’m reviewing; Shadow Distance by Gerald Vizenor, a collection of his writing across various genres, which I’m reading for school; Captured! The Betty and Barney Hill UFO Experience by Stanton T. Friedman and Kathleen Marden; and, as an audiobook, Chariots of the Gods by Erich von Däniken—which I’m finding deeply disturbing so far—for research. Last but not least, a friend just leant me Ursula K. Le Guin’s children’s book Catwings which I’ve begun and am deeply enchanted by!

7. What trait do you most value in your editor (or agent)?
This is actually true of both of them: I most value their kindness and honesty. I feel so deeply, deeply lucky to have such human, humane people working with me who have been able to clearly tell me what needed work in my manuscript, who haven’t sugarcoated or BSed me about the nature of the process, and who, at the same time, I enjoy chatting to on the phone or via e-mail about what we’ve been reading and watching or about how we’re all holding up during this time.

8. If you could go back in time and talk to the earlier you, before you started All My Mother’s Lovers, what would you say?
Hang in there! You’ll write a book with a plot—that other people also agree is a plot—one day!

9. Who is your most trusted reader of your work and why?
My mom. Because I love her and she’s been working as a writer and editor and freelancer in a bajillion industries and is wise and funny and warm and has a wonderful critical eye and I think she’s rad.

10. What’s the best piece of writing advice you’ve ever heard?
Writing is work, and you have to sit your butt down in that chair and actually write in order to get better.

“It is a vulnerable thing to expose one’s least-glamorous moments to the scrutiny of the page.” —Cooper Lee Bombardier, author of Pass With Care