This week’s installment of Ten Questions features Rufi Thorpe, whose novel The Knockout Queen is out today from Knopf. Set in a rapidly gentrifying suburb of Los Angeles, The Knockout Queen concerns neighbors and unlikely friends Bunny Lampert and Michael Hesketh. Bunny and Michael have lived next to each other for years and attend the same school, but they only begin to talk to each other after Bunny catches Michael smoking in her yard in the tenth grade. Bunny is wealthy, the daughter of a successful real estate agent, and lives in an upscale mansion, while Michael lives with his aunt in a small stucco cottage next door. Despite their surface-level differences, both are outsiders: The unusually tall Bunny, who lost her mother and whose well-to-do father struggles with alcoholism, is desperately lonely, such that Michael observes, “her loneliness was so palpable as to be a taste in the air.” Michael is wrestling with his own family troubles, while also coming to term with his sexuality. Darkly comic and fiercely intelligent, The Knockout Queen documents the unique intensity of their friendship, and the aftermath of an act of violence that shakes both their lives. “A blistering, brilliant look at friendship and violence, suburbia and class, all told by one of the most observant, engaging narrators I’ve read in a very long time. This book is going to stay with me,” writes Grant Ginder. Rufi Thorpe is the author of a previous novel, The Girls From Corona del Mar, which was longlisted for the 2014 International Dylan Thomas Prize and the 2014 Flaherty-Dunnan First Novel Prize. A graduate of the University of Virginia MFA program, Thorpe lives in Los Angeles. 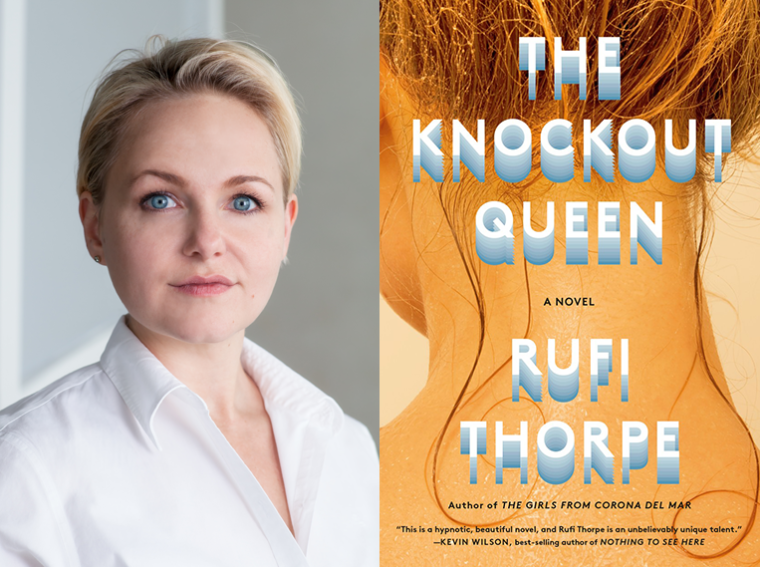 1. How long did it take you to write The Knockout Queen?
I wrote a book about Bunny Lampert ten years ago and shelved it. It was a completely different plot, but the character is recognizably the same. This current iteration took me about three years.

2. What was the most challenging thing about writing the book?
I was at a real low point in terms of confidence in myself as an artist when I started, and so I decided to write whatever I wanted. It felt too scary to try to write something good, so I just let it rip, and the book has a lot of urgency to it as a result. Which is to say, there was nothing hard about writing it, it was more like finally giving in to some terrible force.

3. Where, when, and how often do you write?
When I am working on a book, I write pretty much every day, semi-recumbent on my living room sofa, my laptop balanced on my knees so I can watch the crows in the avocado tree and see if the neighbors do anything interesting. I reheat the same cup of coffee thirty times until it is vile with a gummy film on top. When I am not working on a book, I go into a reading frenzy. There are just so many fascinating things to learn about.

4. What are you reading right now?
I’ve gotten really interested in the future of war and weapons development, so I read Future War by Robert Latiff, but now I’m reading Imperial Grunts by Robert Kaplan, which is fascinating. Novel wise, I just finished Perfect Tunes, Emily Gould’s new book, and it was pure pleasure.

5. Which author, in your opinion, deserves wider recognition?
Joseph Kertes. His books are simply astonishing—luminous and wise and make-people-in-public-think-you’re-crazy funny. I once peed myself a little in a Greek Café. How many writers can say their books made people pee in cafés? Not many. Start with Last Impressions because it just came out, but make sure to read The Afterlife of Stars as well!

6. What is one thing that your agent or editor told you during the process of publishing this book that stuck with you?
On our first phone call about the book, my editor told me she also had been obsessed with RuPaul in high school and had a huge poster of him in her room—my characters Bunny and Michael are devoted to Ru, and I have always been a fan. I am sure the drag community has mixed feelings about their ardent teen girl fans, and obviously drag is bigger and more complex than what it meant to me at fifteen, but what a lifeline it was to see female beauty taken apart and put back together again, to see the harshest criticisms and the importance of self-love side by side. When teen girls love a thing, oh man, they love it hard, and I felt like I could see the ghost of my editor as a teenage girl and the ghost of me as a teenage girl, all the beds we flopped on and ceilings we stared at trying to figure out how to be a person. Chewing on the ends of our hair, watching RuPaul on TV, feeling the itchy, inflamed yearning and numb doubt that perhaps all teenage girls since the beginning of time have felt.

7. Would you recommend writers pursue an MFA?
If you can go without going into debt, then it is basically a free two years to try to figure yourself out, but in my experience you learn how to write novels by writing novels, not from workshop. But it can be nice to make friends, and it is less depressing than waitressing because it allows you to maintain important delusions about yourself.

8. If you could go back in time and talk to the earlier you, before you started The Knockout Queen, what would you say?
Have fun.

9. Who is your most trusted reader of your work and why?
My mother reads everything I write and she is a brilliant editor. Because she is my mother, she is willing to be gentle to the tender, blistered skin of a work in progress—a true boon.

10. What’s the best piece of writing advice you’ve ever heard?
Oh, there are too many, I would love to compile them all like a spoon collection, but I suppose the most central one for me is that Annie Dillard quote: “One of the things I know about writing is this: Spend it all, shoot it, play it, lose it, all, right away, every time. Do not hoard what seems good for a later place in the book or for another book; give it, give it all, give it now.”

“Just opening the document each day keeps it on track.” —Rebecca Dinerstein Knight, author of Hex