This week’s installment of Ten Questions features Rebecca Dinerstein Knight, whose second novel, Hex, is out today from Viking. When a Columbia University student dies from toxic exposure in the course of her research, the school expels the remaining members of the lab. But one PhD candidate, Nell Barber, is compelled to continue her deceased peer’s work; she steals materials on her last afternoon and set outs, independently, to break the speed record for the detoxification of poisonous plants. As Nell’s apartment fills with her deadly specimens, her social life is also becoming increasingly complicated. She idolizes her mentor, Dr. Joan Kallas, and finds herself trapped in a web of grudges and obsessions that includes Joan, Joan’s husband, her ex, her best friend, and the best friend’s boyfriend. All six characters collide in this spellbinding campus novel—spinning a tale of poison, antidote, and emotional intensity. “Hex is sexy, unhinged, revelatory, so smart it gives the reader whiplash,” writes Julie Buntin. Rebecca Dinerstein Knight earned her BA from Yale and MFA from New York University. She is the author of a previous novel, The Sunlit Night, and a poetry collection, Lofoten. Her screenplay adaptation of The Sunlit Night premiered as a feature film at the 2019 Sundance Film Festival. Born in New York City, she lives in New Hampshire. 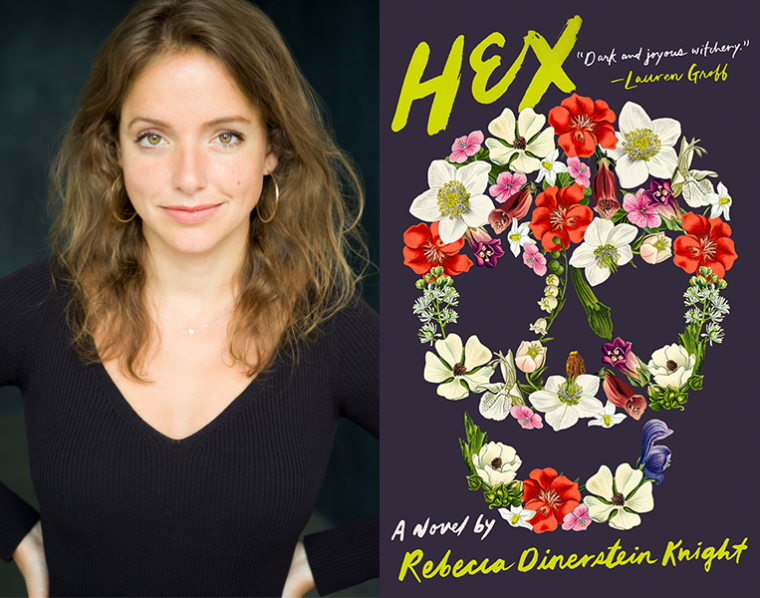 1. How long did it take you to write Hex?
I wrote Hex in a kind of fever dream, daily and obsessively, for six months. Then I put it aside for another six months. I returned to it with my stellar editor, Allison Lorentzen, and edited for another two months or so. But all in all it was a surge rather than a slow build, which was refreshing given that my first novel took six years and several complete rewrites.

2. What was the most challenging thing about writing the book?
The research. Nell is a biological sciences PhD candidate; I am not. I grew up in New York City, without a garden, so even the basics of planting were new to me. I relished the really difficult task of adding a scientific basis to my previously aesthetic appreciation of flowers, seeds, bulbs, the components of the natural world.

3. Where, when, and how often do you write?
I like to write in the morning, after a cup of coffee and a banana and/or bowl of cereal—I ate a grotesque quantity of Kix cereal while writing Hex. I write from about eight-thirty to eleven-thirty, break for lunch, and then go back to it from about one to three. That’s a full day. When I’m working on a book, I try to do at least the morning segment of that schedule every day. Just opening the document each day keeps it on track.

4. What are you reading right now?
A lot of essays: the transcendent Selected Writings of Walter Pater, Jia Tolentino’s Trick Mirror, Lydia Davis’s Essays One, Jordan Kisner’s Thin Places. I find their linear concision helps ground me during the promotional phase of Hex’s release. When I start a new project, I’ll return to reading fiction.

5. Which author, in your opinion, deserves wider recognition?
Vita Sackville-West, a 1920s novelist and poet who lived brilliantly and got basically replaced in posterity by her contemporary and companion, Virginia Woolf. Sackville-West’s novel The Edwardians was a lodestar for me while writing Hex.

6. Would you recommend writers pursue an MFA?
I loved the MFA program I attended at NYU, but I didn’t have to pay for it. The generosity of the fellowship program there made it possible for me to pursue that degree. Once inside, I found the friendships I made there invaluable, but I would never have entered the program without that crucial financial support. If you can make the tuition work for you, with or without assistance, an MFA program most importantly gives you a structure in which to focus on your work. That can be an enormous gift.

7. What is one thing that your agent or editor told you during the process of publishing this book that stuck with you?
Find the opportunities.

8. If you could go back in time and talk to the earlier you, before you started Hex, what would you say?
This is a fun one.

9. Who is your most trusted reader of your work and why?
My husband, John Knight, is an independent editor and he’s extraordinary. He has made every text I’ve brought to him—novel, screenplay, essays, every assignment I wrestle with—immeasurably stronger, clearer, tighter, more purposeful, and altogether more beautiful. If you’re looking for a reader, he’s at knighteditorial.com.

10. What’s the best piece of writing advice you’ve ever heard?
Make it a ritual. Bind writing to a daily non-writing activity so that you have a cue: the coffee, the Kix, the computer. The toothbrush, ten pets to the cat, the computer. Take the pressure off yourself to initiate writing and build it into an external sequence so you don’t have to ask yourself whether or when to begin. It’s decided in advance. The dishes, the gingersnap, the computer.

“I wish I could simply walk into an office every day and feel ready to go, but that’s just not the case for me, and I know that by now.” —Marianne Chan, author of All Heathens