This week’s installment of Ten Questions features Cooper Lee Bombardier, whose memoir-in-essays, Pass With Care, will be published on June 9 by Dottir Press. (Previously scheduled to be released today, the publication date was delayed due to the COVID-19 pandemic.) Writing over the course of two decades, Cooper Lee Bombardier charts his coming into his identity as trans and as an artist. He remembers conversations with friends, road trips, gigs, loves, sex, and loss. No matter the subject, Bombardier models how to tell a story on one’s own terms: He shifts from poems to prose, from memory to theory and back again. A record of bygone eras—notably the queer punk scene of nineties San Francisco—Pass With Care is equally a contemporary political text that wrestles with questions of queerness, transness, and masculinity as they unfold today and into the future. “Bombardier leads with curiosity and vulnerability, unveiling a story of possibilities and resilience, and shining a light on a self who has learned ‘how to make freedom,’” writes Carter Sickels. Cooper Lee Bombardier’s writing has appeared in the Kenyon Review, the Malahat Review, Ninth Letter, BOMB, Longreads, and the Rumpus, among other outlets. His work has also featured in numerous anthologies, including The Remedy: Queer and Trans Voices on Health and Healthcare and Meanwhile, Elsewhere: Speculative Fiction From Transgender Writers, which won the American Library Association Stonewall Book Award. 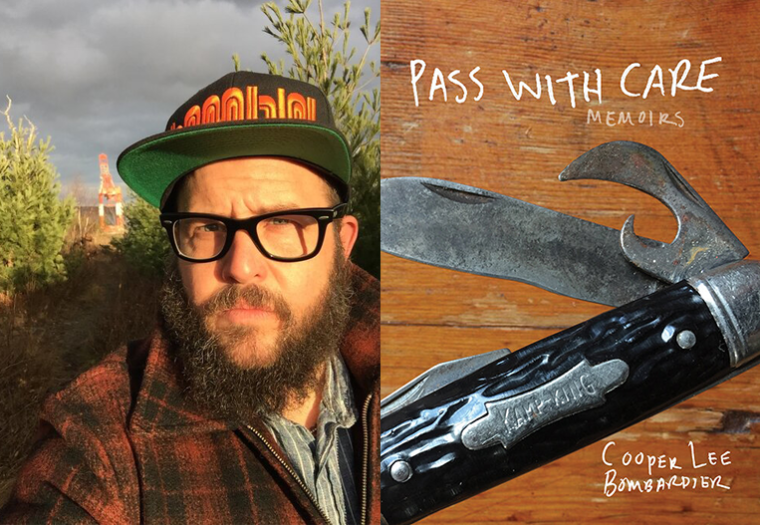 1. How long did it take you to write Pass With Care?
Writing Pass With Care took both twenty years and two years. The book spans over two decades of writing coalesced around the theme of gender, but the process of pulling this collection of writings—many in different tones or structural forms—into a cohesive volume was a two-year process with my publishing team. I’d gone from self-taught to a much more experienced writer over those two decades, and it was important to bring the various pieces into conversation with each other, and to connect them along a narrative arc, even if it is an intuitive one. My publisher’s vision for the book really took it beyond what I’d even imagined it could be.

2. What was the most challenging thing about writing the book?
It was challenging to figure out how to place work operating with different formal concerns in an adjacency that cohered and flowed, but the team at Dottir had such a great ability to see the big picture and to create a broader structure for the collection.

It’s challenging to keep faith that the world wants to read trans stories written by actual trans people. Another thing that was challenging was adding a never-before-published essay investigating moments of personal failure, healing, and accountability. It is a vulnerable thing to expose one’s least-glamorous moments to the scrutiny of the page, but all of the artists and writers who’ve impacted my life have done exactly that, so I trust in their example that this is work worth doing.

It’s also a pretty bizarre time to have one’s first book come out. As my in-person May/June book launch events got canceled, at first I felt pretty bummed out, but then I realized that in the scope of things, my book launch is by far not the most important thing, even if it is the apogee of years of work. At the same time, these many weeks of isolation has reinforced the importance of books, of artists and writers, in our lives. Art makes the unbearable bearable, and so I hope we’ll all do what we can to support authors and artists during this strange, sad time. Tuning in for a virtual reading, buying a book, supporting your local indie bookstore, posting a book review online, chipping in for an author’s Patreon, buying art or taking a class from a favorite artist...these are little things we can do to keep authors and artists going.

3. Where, when, and how often do you write?
I have a tiny office in my house where I write. I also sometimes like to work in a busy café. Since the pandemic hit, this of course has not been an option. I make my living as a writer and what this looks like is that I teach in a low-residency MFA program and sometimes teach part time at other universities, I do freelance writing and editing, I get paid to give talks and guest lectures, I tutor students in a university writing center—one of the most rewarding parts of my writing work—and I sometimes get paid for the actual writing. So, my writing process has had to be adaptable to whatever else I have going on. This means that I often work on shorter projects like essays and interviews during the school year, and work on more in-depth projects like book manuscripts during times I can totally sink in, like writing residencies. Right now, I’m done with the school year and, because of self-quarantine, I’ve really needed structure, so I am writing every day from 9 AM to noon, Monday through Friday. I can get a bit manic and intense with the book I’m working on, so taking the afternoons to work on my editing gigs and other projects is helpful. And it’s important to me to figure out how to work from home without always working, hence the weekend off from all work whenever possible. The break also helps what I wrote during the week congeal a bit. I find that useful.

4. What are you reading right now?
I’m reading Later by Paul Lisicky, Funeral Rites by Jean Genet, and Black on Both Sides: A Racial History of Trans Identity by C. Riley Snorton.

5. Which author, in your opinion, deserves wider recognition?
The novelist, essayist, and poet Ryka Aoki should be read by everyone. She’s so gifted in any form she touches. Her novel He Mele A Hilo: A Hilo Song is a work of brilliant, fabulist generosity.

6. What is the biggest impediment to your writing life?
Capitalism.

7. What is one thing that your agent or editor told you during the process of publishing this book that stuck with you?
When we embarked upon the editorial process, my publisher told me, “You’re not alone,” and this felt like such a gift when so much of writing is solitary and there is so much quiet space to doubt and headfuck oneself about the work. I felt very supported as we transformed the manuscript from what seemed like a bristling bale of hay into a book that I feel really proud of.

8. What is one thing you might change about the writing community or publishing industry?
As a subset of the broader culture, publishing is in no way immune to the discrimination, biases, and favoritism that arises out of a white supremacist, inherently misogynist, cis-centric society. I’d change not only the demographics of who primarily gets published—and paid well—but also who occupies seats of power and decision-making in publishing.

9. Who is your most trusted reader of your work and why?
I’ve had the luck of working with many incredible editors through the various outlets that have published my work, but my most frequent and consistent reader is my wife. She’s my biggest fan, but she is also immune to my tricks and will take me to task about anything she questions in my work.

10. What’s the best piece of writing advice you’ve ever heard?
I guess it would be an amalgam of what a few writing heroes of mine have told me: There is no one “writer’s life,” and in fact the mythological writer’s life is pretty much just that—a myth. The writer who writes around the kids’ naps and a day job is just as much a writer as the one who gets seven-figure advances and has no other demands on their time.