This week’s installment of Ten Questions features Kyle McCarthy, whose debut novel, Everyone Knows How Much I Love You, is out today from Ballantine Books. An aspiring novelist, thirty-year-old Rose moves to New York City and pays the bills by tutoring the children of Manhattan’s elite. Shortly after her arrival, she reunites with Lacie, her childhood best friend—a friend she betrayed—who is also a primary character in her secret, semiautobiographical novel-in-progress. After moving into Lacie’s spare room, Rose’s fascination with her old friend only grows. She watches Lacie, even tries on her clothes when she is out of the apartment, seeking to understand and develop fictional-Lacie’s point-of-view. But as times passes the line between Rose’s life and her art begins to blur, and when she becomes involved with Lacie’s boyfriend, Ian, her life and mental state become increasingly precarious. A dark and psychological novel, Everyone Knows How Much I Love You is a startling account of violence, obsession, and shame. “Everyone Knows How Much I Love You is breathless and precise at once, utterly gripping, animated by the propulsive unfolding of hungers that can’t be controlled or fully fathomed,” writes Leslie Jamison. Kyle McCarthy’s fiction has appeared in The Best American Short Stories, American Short Fiction, and the Harvard Review. A graduate of the Iowa Writers’ Workshop, she has received support and grants from the Edward F. Albee Foundation, the Lighthouse Works, and the Elizabeth George Foundation. She lives in Brooklyn, New York. 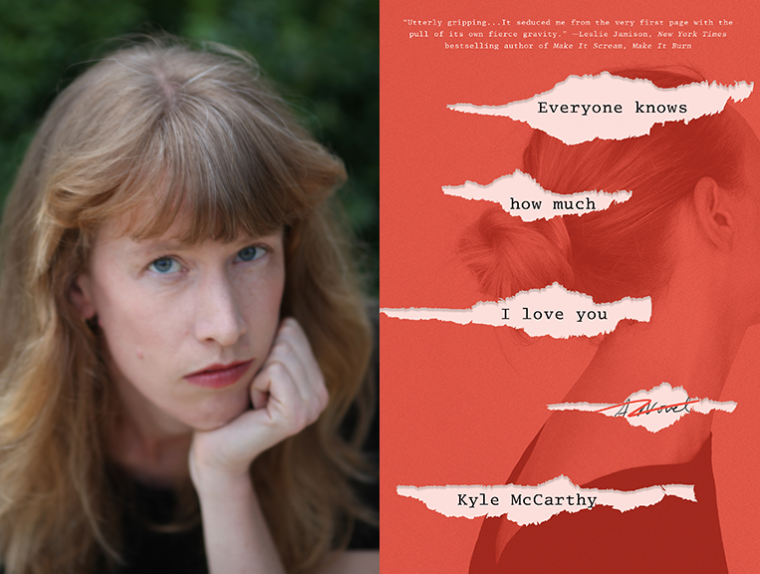 Kyle McCarthy, author of Everyone Knows How Much I Love You.  (Credit: Patrick McCarthy)

1. How long did it take you to write Everyone Knows How Much I Love You?
The earliest files on my computer about a love triangle novel are from 2011, so clearly I’d been kicking around the idea for a while before I began to write in earnest, sometime in 2015. I sold the book about three years later and sent it in for copyediting a year after that, so four years of active writing, after about four years of daydreaming and notes.

2. What was the most challenging thing about writing the book?
Strangely, I think one of the most challenging things was letting people finally read it. I wrote the first few drafts without telling anyone anything about it. I let a good friend read a draft, and then didn’t show it to another soul for another eighteen months. So when it came time to let people into this private world I made, I unexpectedly found it excruciating.

3. Where, when, and how often do you write?
First thing in the morning, at my dedicated writing desk—almost always. I put my phone on airplane mode and set up my internet blockers the night before. It’s a little extreme, but I find keeping the daily world at bay helps for cultivating that trance-like spell required for writing fiction.

4. What are you reading right now?
I’m thinking about hauntings and houses right now: Rebecca, Jane Eyre, Wide Sargasso Sea, Beloved, The Haunting of Hill House. I just finished Too Loud a Solitude by Bohumil Hrabal and loved it. Next up is The Warmth of Other Suns by Isabel Wilkerson. Oh, and recently while writing I keep dipping back into Severance by Ling Ma; I admire the heck out of that book.

5. Which author, in your opinion, deserves wider recognition?
Nearly every author, but I’ll limit myself to six: Evan James published a brilliant essay collection, I’ve Been Wrong Before, right as the pandemic broke. Man Gone Down by Michael Thomas seared me when I read it. Michelle Huneven is one of the most stylish, witty, and understated writers I know. Jamaica Kincaid is widely read, but I think she should be more widely read. Lore Segal is a national treasure. Finally, César Aira. An Episode in the Life of a Landscape Painter is not to be missed.

6. What is the biggest impediment to your writing life?
These days, it’s distraction, pure and simple. When the pandemic began, my boyfriend moved in to my one bedroom apartment, and solitude became a lot harder to find. The news has been reliably overwhelming. And I have a first book coming out. But I try to write a bit every day. So much of writing is about being gentle but firm with yourself. I try not to blame myself for not composing my masterpiece in quarantine; at the same time, I make sure I make it to the desk each day.

7. What trait do you most value in your editor?
My editor, Sara Weiss, has the gift of articulating what’s not quite working in a narrative. She has a finely tuned sensor, and she holds me to a high standard. Yet I know that in-house, she’s been a terrific champion of the book from the moment she read it. It’s that mix of passion and rigor that I so value.

8. If you could go back in time and talk to the earlier you, before you started Everyone Knows How Much I Love You, what would you say?
The girl I really want to talk to is the one writing her first novel, right out of grad school. I’d pick her up by the lapels and say, Stop beating your novel to death. I’d say: Writing is supposed to be fun. Enjoy yourself. Your perfectionism is getting in the way. By the time I started Everyone Knows How Much I Love You, I’d figured this out, which is part of why this book was such a pleasure to write.

9. What is one thing you might change about the writing community or publishing industry?
As the recent #publishingpaidme discussion on Twitter has made abundantly clear, publishing needs to fight racism by paying BIPOC authors equitable advances; hiring more BIPOC, especially at higher levels; and generally strengthening its commitment to anti-racism. Publishing is quite literally the storytelling industry; to blame our paucity of voices on the marketplace is a dodge.

10. What’s the best piece of writing advice you’ve ever heard?
From Marilynne Robinson: Writing is like prayer. You might as well be honest.

“I have a deeply unhealthy work-life balance in that the Venn diagram of those things is a circle.” —Ilana Masad, author of All My Mother’s Lovers