This week’s installment of Ten Questions features Sophie Mackintosh, whose second novel, Blue Ticket, is out today from Doubleday. In the world of Blue Ticket, a lottery determines every young girl’s fate. On the day of their first period, girls must report to stations where they are issued either a blue or a white ticket. Blue indicates the freedom to pursue a career, while white indicates a life devoted to marriage and children. “Your life becomes a set thing, written and unchangeable,” says Calla, the novel’s protagonist and a blue-ticket woman. “To wish for any other was a fallacy at best, treasonous at worst.” But despite having obtained the ticket to “freedom”—the ticket her father says her late mother would’ve wanted for her—Calla does begin to wish for another future. She is overcome by the desire to bear a child even though the system has indoctrinated her to believe she would be an unfit mother—even though the choice would make her both outlaw and outcast. In charting Calla’s trajectory, Mackintosh poses urgent questions about social expectations and free will that are relevant to all realities. “The cool intensity and strange beauty of Blue Ticket is a wonder,” writes Deborah Levy. Sophie Mackintosh is also the author of The Water Cure, which was longlisted for the 2018 Man Booker Prize and won the 2019 Betty Trask Award. Her fiction, nonfiction, and poetry have appeared in the New York Times, Granta, Dazed, and the Guardian, among other publications. Born in Wales, she lives in London. 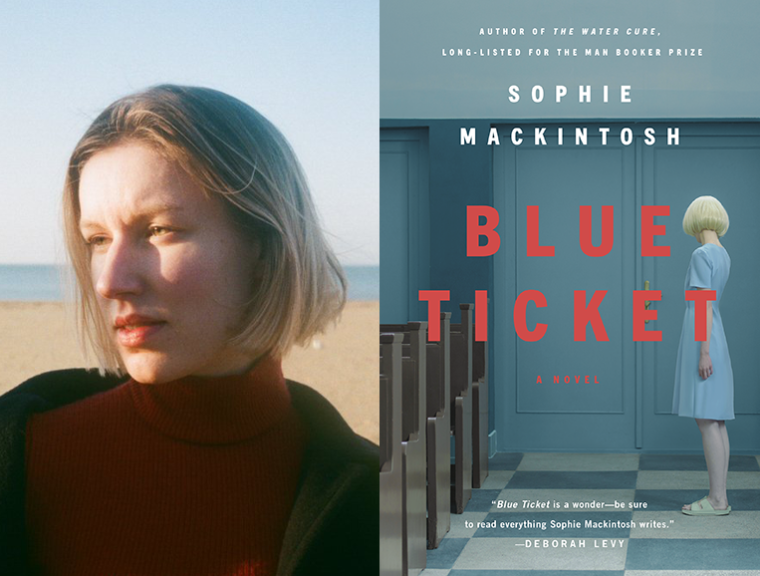 1. How long did it take you to write Blue Ticket?
From first draft to final edits, it took me almost two years.

2. What was the most challenging thing about writing the book?
It was written at a chaotic time—my first novel, The Water Cure, was attracting a lot of attention due to being longlisted for the Booker prize; my partner was diagnosed with cancer and spent a lot of time in hospital and convalescing; I was newly freelancing as a copywriter and made the common mistake of taking on too much work out of fear; and we topped it off by moving into a wonderful old house that’s also falling apart around us. But I realized that there is literally always going to be stuff happening and for me, personally, having the focus of a project I felt very compelled to write really helped me with all of the above. It probably explains why it’s a bit intense though.

3. Where, when, and how often do you write?
I try to write every day, unless I’ve finished a draft of something, after which I take a few days off while it percolates. Before the pandemic I usually wrote in local cafés, or at a temporary desk set up in the living room. Now, with two of us in the house, I start work at my kitchen table, early in the morning, before my partner or the rest of the world is awake. This is the routine I got into when I was working full time, and it still works for me—I do prefer to write at less antisocial hours, but quite annoyingly, this is when I seem to get the most done.

4. What are you reading right now?
You Exist Too Much by Zaina Arafat—a beautiful debut exploring the emotional journey of a queer Palestinian American woman as she grapples with love addiction. I’m finding it very compelling.

5. Which author, in your opinion, deserves wider recognition?
Joy Williams—her short stories are really things of wonder. One of my favorite books is her novel The Changeling, which is woefully underappreciated.

6. What is the biggest impediment to your writing life?
I don’t have a dedicated writing space at the moment, so I dream of a little office where I can organize research and stick things on a corkboard and have a selection of color-coded Post-its. Luckily all I actually need is my laptop, so this is a very minor thing in the scheme of things—there is really nothing major impeding my writing life at all, an astonishing privilege that I’m so grateful for every day. I know it’s very unlikely to last forever, one way or another, so I’m making the most of it while I can.

7. What is one thing that your agent or editor told you during the process of publishing this book that stuck with you?
To think about the reader more. Ambiguity features prominently in my work, but there’s a balance to be struck between what you reveal and what you hold back; sometimes I could be more generous with this.

8. If you could go back in time and talk to the earlier you, before you started Blue Ticket, what would you say?
I would say to be gentler with myself, and that writing my first book was not a fluke—the trick can be repeated, and will be completed, somehow. And then you just have to figure out how to repeat it again. And again! Actually, maybe that’s not helpful.

9. Who is your most trusted reader of your work and why?
My agent, Harriet Moore, who I’ve worked with for close to a decade now. She has an uncanny knack of knowing exactly what I’m trying to achieve, and her advice is always incredibly generous and thoughtful.

10. What’s the best piece of writing advice you’ve ever heard?
I don’t remember exactly where I saw this—I think on Twitter?—but it was the concept of a “bay leaf”: Something in your writing that you end up taking out, but it’s not a waste, as it was a necessary step to get to where you were. Something that enrichs the flavor of your writing, maybe, or leads to something better. In early drafts this concept helps me try things out and doesn’t see the numerous, numerous cuts I end up making as wasted time. It’s all going somewhere.