This week’s installment of Ten Questions features Amitava Kumar, whose new novel, Immigrant, Montana, is out today from Knopf. This coming-of-age novel tells the story of Kailash, a young Indian immigrant who arrives in New York City in 1990 to study post-colonialism. What follows is a series of romantic entanglements, a trip to Montana, and the intellectual and personal awakenings of a young man exploring what it means to be home—or be without one. “In this land that was someone else’s country,” Kailash says, “I did not have a place to stand.” Kumar, who grew up in Patna, India, is the author of several books of nonfiction, including the essay collection Lunch With a Bigot: The Writer and the World (Duke University Press, 2015), and a novel, Nobody Does the Right Thing (Duke University Press, 2010). His journalism has appeared in the New Yorker, the New York Times, Granta, Guernica, Harper’s, the Nation, NPR, and elsewhere, and he has received fellowships in literature from the Guggenheim Foundation and the Ford Foundation. He is a board member of the Asian American Writers Workshop and lives in upstate New York, where he is the Helen D. Lockwood professor of English at Vassar College. 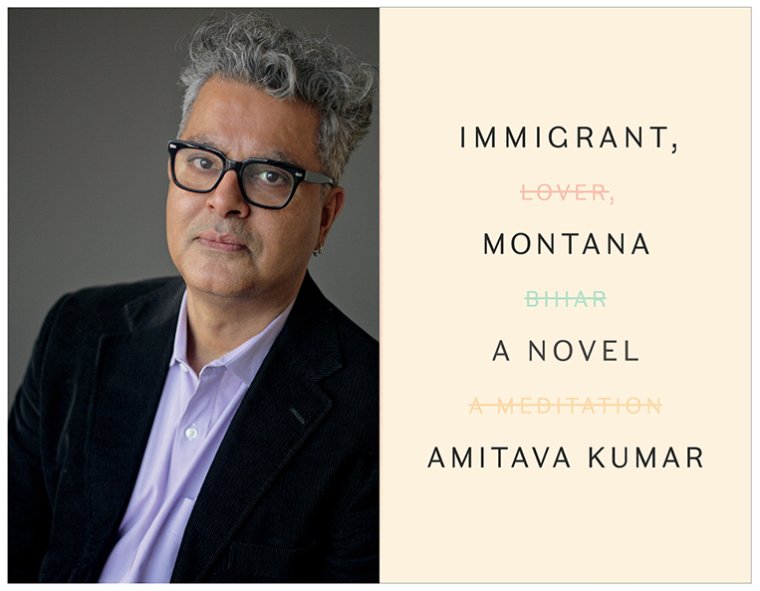 1. Where, when, and how often do you write?
I write in my study. My house is right across the street from Vassar College but my study is at the back of the house and overlooks a creek. After my kids have left for school, I sit down to write and then go walking beside the water. I write every day and walk every day.

2. How long did it take you to write Immigrant, Montana?
Decades. Or, I wrote the opening scene on a train when I was going to interview for my first job, as an assistant professor at a university. Other books happened. I wrote other scenes and it wasn’t till three years ago, during a residency at Yaddo, that things fell into place.

3. What has been the most surprising thing about the publication process?
How easy it becomes once you have an agent. My last agent was sick and in the hospital when I finished my novel. He was dying. I couldn’t bother him, of course, so I sent out the book on my own. There were no takers. One of the editors made me wait for months on end. Another asked a friend whether my agent was really in the hospital. When my agent died, I acquired another agent. I had a book deal within three days.

4. Where did you first get published?
I’m old. I have been writing and publishing for such a long time that it’s difficult to remember. A part of this novel was first published years ago in a newspaper in India. But in terms of my career, to be honest, I felt I had really published when I got into the pages of Granta. Why? Because it had been a dream for so long.

5. What are you reading right now?
I’m about a hundred pages into Preti Taneja’s We That Are Young. Taneja is very alert to social hierarchies but one of the other fascinating things about the book is that it is a rewriting of King Lear and set in modern-day India. I’ve just finished reading Lisa Halliday’s Asymmetry, a fascinating book for different reasons. What intrigued me most was the structure. I’m going to Milan next month, where Halliday lives, and if I bump into her I want to shower her with compliments and questions.

6. If you were stuck on a desert island, which book would you want with you?
I must confess that there are any number of big books that I haven’t read. The enforced stay on a desert island might just be the ticket. I’d be able to finally read Ulysses or Moby Dick or War and Peace.

7. Who is the most underrated author, in your opinion?
You know, one of the writers I always want to tell my students about is David Markson. This is Not a Novel is a masterpiece of formal invention. I’m surprised that when the world discusses Indian writing, the name of A. K. Ramanujan doesn’t come up more often. His poetry as well as his translations should have earned him a place in the pantheon.

8. What is the biggest impediment to your writing life?
Not what but who. Mark Zuckerberg. I’m kidding—but not really.

9. What trait do you most value in your editor or agent?
In my editor, the talent for seeing things whole: You are entering a room, or stepping on a stair, but you know always where you are in the house. And in my agent, who moves very fast, the ability to remind me about the virtue of patience.

10. What’s the best piece of writing advice you’ve ever heard?
This isn’t very original. But I can’t tell you how often I’ve been consoled or encouraged by that old line from E. L. Doctorow: “Writing a book is like driving a car at night. You only see as far as your headlights go, but you can make the whole trip that way.”

“I’m coming to believe more and more that the whole body should be engaged in the writing process.”—Amy Bonnaffons, author of the debut story collection The Wrong Heaven

“You can almost always make something better by making it shorter.” —Keith Gessen, author of the novel A Terrible Country