This week’s installment of Ten Questions features Allie Rowbottom, whose debut novel, Aesthetica, is out today from Soho Press. In this Los Angeles Gothic narrative set in the near future, an aging former influencer named Anna undergoes a cosmetic procedure that promises to reverse the many plastic surgeries she underwent seeking internet celebrity. Meanwhile a reporter is set to out her former manager, Jake, as an abuser, and Anna must decide whether to tell her own story about the man who “discovered” her at seventeen. As Anna reflects on the events that have brought her to this moment, readers chart her transformation from insecure teenager to Instagram star under the tutelage of Jake, whose money and power Anna craves—determined to rise above her humble upbringing by an ill single mother whose warnings about the perils of social media register too late. Publishers Weekly praises Aesthetica as “a scorching commentary on society’s blindness toward female pain.” Allie Rowbottom is the author of the memoir Jell-O Girls: A Family History (Little, Brown, 2018). Her essays and short fiction can be found at Literary Hub, Salon, and elsewhere. 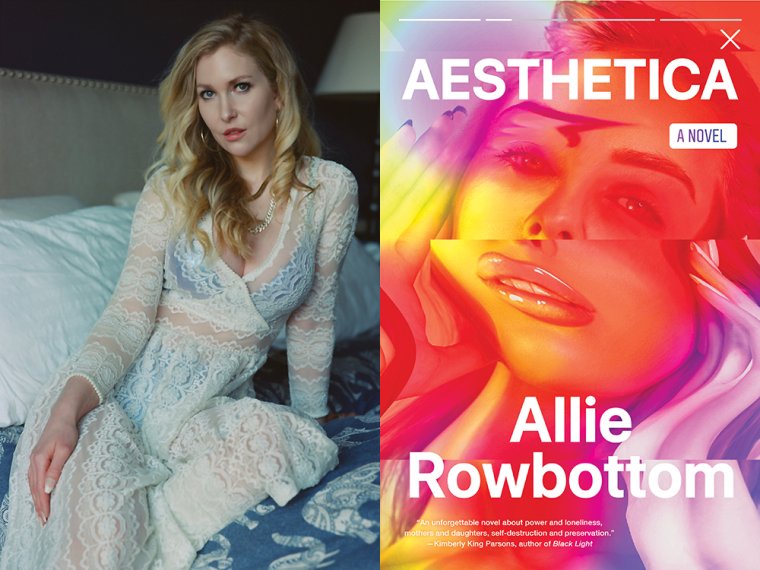 1. How long did it take you to write Aesthetica?
I started Aesthetica in late 2018. Then my computer was stolen, and with it all my work. I started Aesthetica again in 2019. But the draft I produced was terrible and needed to be completely rewritten. Then I broke my wrist roller skating while drunk. It was early 2020, the first days of the pandemic. Wearing a full arm cast, I sat down with a yellow legal pad and a pencil to begin what would become the first draft of the book that Aesthetica is today.

2. What was the most challenging thing about writing the book?
I struggled with the mental task of stepping outside marketplace concerns and the imperative to rush a second book into reality. I kept feeling like I needed a follow-up to Jell-O Girls: A Family History right away, that by not publishing a second book within a year of my first I was failing to seize my moment and would slip into obscurity. Finding my way out of this thought pattern was the most challenging part of writing Aesthetica.

3. Where, when, and how often do you write?
The answer to this question varies depending on what I am working on and how many editing clients I’ve committed to. But for the most part, I write daily: first thing in the morning, at my desk, for an average of two hours.

4. What are you reading right now?
I just finished Miranda July’s The First Bad Man and am about to start reading an unpublished manuscript by Genevieve Hudson, who is a member of my writing group and a dear friend. Reading for my writing group—which consists of myself, Chelsea Bieker, Cyrus Simonoff, Genevieve Hudson and T Kira Madden—is my purest joy. The work my friends produce is always my favorite.

5. Which author or authors have been influential for you, in your writing of this book in particular or as a writer in general?
I have been influenced by Joan Didion’s facility for enmeshing information and cadence on a sentence level, Maggie Nelson’s pacing, Ottessa Moshfegh’s use of the habitual (“every time I...”), and Carole Maso’s knack for sensory experience. For Aesthetica in particular, Mary Gaitskill’s Veronica was a great inspiration and guide. This is a woefully incomplete list.

6. What is one thing that surprised you during the writing of Aesthetica?
I spent a year resisting the plot I needed. When I gave in to it, the whole book fell into place. This was a surprise to me.

7. What is one thing that your agent or editor told you during the process of publishing this book that stuck with you?
“You only need one.” That is something my agent, Erin Harris, told me when Aesthetica was out on submission and kept getting passed on: one editor, one agent, one person to believe in you and see the value in your work. Not only was she right, but the process of selling this book taught me something else: The book everyone wants to buy, the book everyone can agree on, is usually not the book I want to read.

8. If you could go back in time and talk to the earlier you, before you wrote Aesthetica, what would you say?
It’s going to be okay. Take your time. Assemble a team you can trust, but know that no one will ever care about your work as much as you do. It’s up to you to advocate for your books. So be brave and push.

9. What forms of work, other than writing, did you have to do to complete this book?
I met my therapist for the first time after a particularly defeating writing day, and from there our work began. Therapy was imperative to getting this book to the emotional place it needed to be in to achieve what I wanted it to achieve. I also worked quite diligently on building my personal Instagram profile, as well as a separate Instagram account, @annawrey, that I started as a performance art piece adjacent to the novel.

10. What’s the best piece of writing advice you’ve ever heard?
Sentence Writing 101: The strongest word goes at the end.

END_OF_DOCUMENT_TOKEN_TO_BE_REPLACED

“The most challenging thing, for me, was believing that it could be done.” —A. J. Bermudez, author of Stories No One Hopes Are About Them

“I am only able to write because of consistent and reliable childcare.” —Kate Baer, author of And Yet