This week’s installment of Ten Questions features Jeanna Kadlec, whose memoir, Heretic, is out now from Harper. In this blend of personal narrative, history, and cultural criticism, Kadlec reflects on her journey through—and ultimate break with—evangelical Christianity. Opening on the pivotal moment before she files for divorce from her husband, Kadlec flashes back to her upbringing in the Midwest of the 1990s and early 2000s, where she and her family worshipped in several conservative churches. A devout child, Kadlec was also precocious and smart enough to see the dark side of her religious tradition: cultishness, surveillance, misogyny, and anti-intellectualism. Kadlec explores the joys of faith—including her budding English major’s love of scriptural exegesis—alongside the more painful questions about how to square homophobic doctrine with her emerging queer identity. She tells her own story alongside that of Christianity in early America, merging her personal history with that of the nation’s colonization, locating herself within a lineage of intolerance and violence. Kadlec takes readers through her quest for freedom, from a disillusioning stint in academia to the homes she ultimately finds in queer communities and the occult. Publishers Weekly calls Heretic a “searing debut...a poignant story of being born again in a secular world.” Jeanna Kadlec’s writing has appeared in Allure, Catapult, Literary Hub, and elsewhere. An astrologer, former lingerie boutique owner, and recovering academic, she lives in Brooklyn. 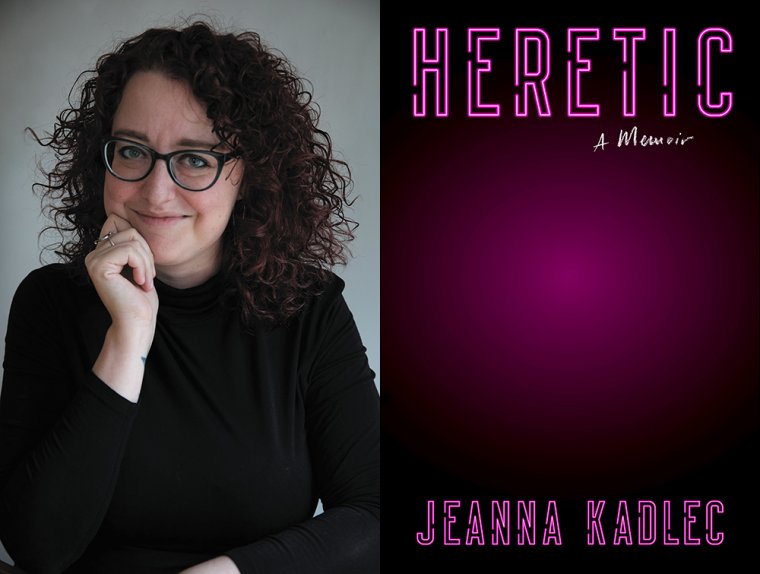 1. How long did it take you to write Heretic?
I first got the idea in 2015, started really writing in 2016, finished a decent draft in 2018, and signed with my agent Dana Murphy in 2019. I went out on submission and got roundly rejected also in 2019, spent a year totally revising and re-envisioning a different kind of structure for the project, actually sold the book to Jenny Xu—who was then at Houghton Mifflin Harcourt before it was acquired by HarperCollins—in 2020. I basically spent 2021 totally rewriting the whole book from scratch (again) and editing with Jenny chapter by chapter. I didn’t finish final revisions and copy edits, etcetera, until spring 2022. So: six or seven years, depending on how you want to count.

2. What was the most challenging thing about writing the book?
I had to get good enough to write the book I wanted to write. Which took longer, and more drafts and rejection, than expected. But it was ultimately necessary for both me and the project.

3. Where, when, and how often do you write?
I journal almost every day. But in terms of creative writing, it depends on the season. When I’m deep in a project, I write at my desk every morning—I am very sharp, very sensitive, in the morning, but significantly less so as the day goes on. Changing locations to a coffee shop can help. I’ve worked from home since 2019, and for myself full-time since 2021, so I have the luxury of setting my own schedule.

When I’m at the very beginning or tail end of a project, in a transition phase—as I am now—I emphatically do not write every day, or really much at all. I prioritize input over output: returning to my to-be-read stack, going for walks, letting my mind wander, sleeping in. Which is lovely. So much of life that contributes to the work is not actually putting pen to paper.

4. What are you reading right now?
I just finished Alison Cochrun’s latest, Kiss Her Once For Me, which is a deliciously messy WLW romance. It comes out November 1.

5. Which author or authors have been influential for you, in your writing of this book in particular or as a writer in general?
So many. An incomplete list: Years ago, reading Melissa Febos’s Abandon Me—a book I dearly love and have discussed excessively at this point—was probably the first memoir I read that really broke open what was possible in terms of hybridity. The way that Esmé Wang, who is a good friend, structured The Collected Schizophrenias was just genius, and it also gave me an immediate comp to show my agent and editors how Heretic might work—like, “Here, see, it actually has been done, and done exceedingly well!” And of course my writers group, which consists of Angela Chen, author of Ace: What Asexuality Reveals About Society, Desire, and the Meaning of Sex; Lilly Dancyger, author of Negative Space; Deena ElGenaidi, writer, editor, and director of the award-winning web series Codependent; and Nina St. Pierre, author of the forthcoming Love Is a Burning Thing. Their impact and influence on my work cannot be overstated.

6.  What is one thing that surprised you during the writing of Heretic?
How much the book changed from draft to draft. There are maybe two or three paragraphs that have survived and are in the final version from that first manuscript that I sent to my agent; everything else has long since been completely rewritten or consigned to the graveyard.

7. What is one thing that your agent or editor told you during the process of publishing this book that stuck with you?
I ended up in the hospital for several weeks around the time my final revisions for Heretic were due, and ultimately had a very slow, several-months-long recovery from that crisis event. Who knew that an appendix bursting could cause so much trouble? Both Dana and Jenny consistently affirmed that my physical and mental health came first, that no deadline was more important than my well-being as a person. They insisted that I take as long as necessary to finish and yelled at me over e-mail almost as much as my partner did when I told them I was still trying to work on the book.

Given how many other authors have stories of breaking themselves apart to meet deadlines for a book, it felt empowering to have the support of my team to heal and rest and recover. Because truly: Publishing isn’t an emergency room. It can wait.

8. If you could go back in time and talk to the earlier you, before you started Heretic, what would you say?
It gets better.

9. What forms of work, other than writing, did you have to do to complete this book?
Staying in therapy was the best thing I did for myself, hands down. I’ve been with my therapist for six years at this point and have been paying the out-of-network rate; but it’s been worth it. Writing a memoir with professional mental health support was so important, both for the events I was reopening and also for the new, vulnerable creative process I was in. The publication process is full of strange and unusual anxieties, and it’s nice to have a designated time to freak out about it.

10. What’s the best piece of writing advice you’ve ever heard?
The first draft is just telling the story to yourself.