This week’s installment of Ten Questions features Kate Baer, whose new poetry collection, And Yet, is forthcoming from Harper Perennial. In a series of tight lyrics, Baer charts the vicissitudes of marriage, child-rearing, and womanhood in an era of pandemic and looming disaster. Mixing sharp observation, morbid humor, and personal affirmations, the poems capture the contradictory feelings and compulsions of life during late capitalism. “I will enjoy this life. I will open it / like a peach in season, suck the juice / from every finger,” she writes in “Idea.” Yet by the next page, the speaker is already imagining her own death in “At the Covid Testing Clinic” and, on the page after that, the right message for her epitaph: “Honestly just a really good time,” she quips in “Headstone Suggestions.” This is a book about learning to accept contradiction—like fresh country air that “reeks of manure and hydrangea blooms”—and celebrating what’s painful: “I throw a surprise party for my rage,” she writes in “Fatal Flaw.” Vogue has called Baer, who has a large social-media following, “a different kind of Instagram poet, not only in that her poems convey a depth of emotion more cutting than the spare, self-help word-art characteristic of so many social media-propelled poet phenomena. But she also distinguishes herself by acknowledging the self-seriousness of the genre (particularly among those who are their own greatest promoters) and gently poking a hole in it.” Kate Baer is the bestselling author of What Kind Of Woman (2020) and I Hope This Finds You Well (2021), both from Harper Perennial. Her writing has appeared on Literary Hub and in the New York Times and the New Yorker. 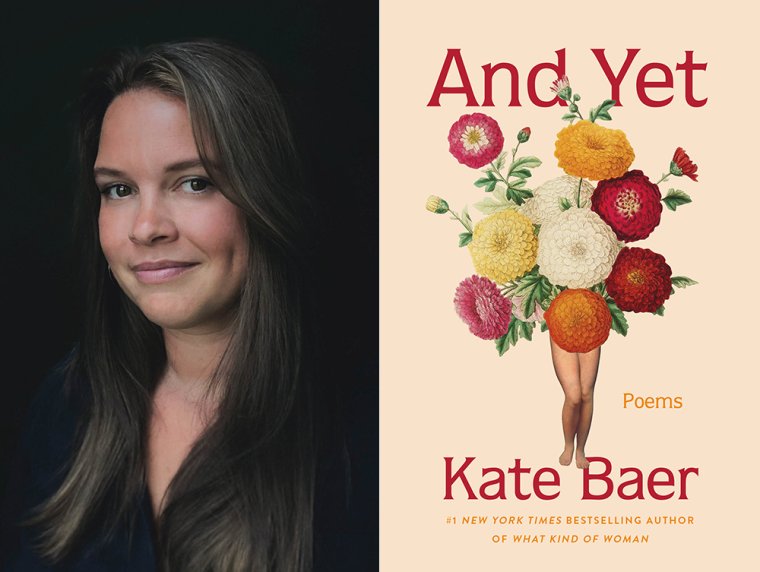 Kate Baer, author of And Yet.

1. How long did it take you to write And Yet?
It’s hard to calculate time spent on a poetry book. Some poems had been sitting for five or six years, waiting to find the right time to fully form. Others were written quickly and furiously. Overall, it took me a little over two years to put together this collection.

2. What was the most challenging thing about writing the book?
Getting out of my own way and allowing playfulness and joy back into my writing. I felt an immense amount of pressure, at first, to recreate What Kind Of Woman, and it took some time to let go of that expectation and move on to something new.

3. Where, when, and how often do you write?
I write in my office three to four days a week during the day, when I have childcare. Childcare is an essential part of my writing life, and I try to mention that as much as I can. I am only able to write because of consistent and reliable childcare. Obviously so much of writing happens outside of that time as well. I’m constantly e-mailing myself ideas and lines, or even random words, but the actual construction happens during office hours.

4. What are you reading right now?
I recently finished José Olivarez’s new book, Promises of Gold, which was wonderful. Before that I read All My Rage by Sabaa Tahir, which knocked me off my feet.

5. What was your strategy for organizing the poems in this collection?
To piece it together so that it would have a natural flow. What Kind of Woman was split into three parts, loosely organized by category. And Yet is more like one long stream of consciousness.

6. How did you arrive at the title And Yet for this collection?
We are coming off a few years of collective grief, extremes, and absolutes. Meanwhile the and yets hover all around us. My neighbor believes in QAnon and yet she spends every minute of her spare time volunteering at the local animal shelter. Homeschooling my children during the pandemic was an enormous strain on the family and yet we got to enjoy a more relaxed schedule. The internet and our current political divide has erased so much nuance from almost every equation. Our brains do just as much sometimes, my own included. Leaning into the tension of despair versus hope, and the complex ways humanity presents itself in this world, led to both the title poem and the title of the book.

7. What is one thing that surprised you during the writing of And Yet?
I was surprised by how often death crept into the pages. Not just the idea of dying, but what comes after. And why the before? Is there a god puppeteering this whole charade? Do we have purpose? Is there meaning behind human suffering? You know, just your everyday, run-of-the-mill existentialism.

8. If you could go back in time and talk to the earlier you, before you started And Yet, what would you say?
I would never trust a former self to listen to anything I say: She’s a very slow learner. But if I had to choose something, I guess I would tell her to lean into the weird and not worry about writing poems for a phantom audience that only wants a happy ending.

9. What forms of work, other than writing, did you have to do to complete this book?
Walking, unplugging, taking my dog to the backyard for zoomies, chatting with friends—anything to trigger my brain into wandering outside of written poetry and into real-life poetry. I also keep stacks of books in my office to grab whenever I need to get my head back into the clouds. Music helps too. I have written very little in silence.

10. What’s the best piece of writing advice you’ve ever heard?
No one cares if you’re a writer except you. This goes for most venturers, but especially artists. No one cares if you write or not. No one is going to force you to sit down; no one is going to take away your phone and stand over your shoulder. You have to care. You have to start and continue the forward motion. It’s entirely up to you.