Ten Questions for A. J. Bermudez

This week’s installment of Ten Questions features A. J. Bermudez, whose debut story collection, Stories No One Hopes Are About Them, is out now from the University of Iowa Press. In these incisive tales, Bermudez probes the prickly power dynamics chafing just beneath the surface of every interaction. In many of the stories, marginalized characters are forced to play by the rules of the elite, learning to maneuver around their egotism and narcissism in order to stay afloat—and maybe even grab a little clout for themselves. Desire is at the heart of these stories: for money, status, attention, and control. The narratives explore the compromises people make and the ways they delude themselves to get what they think they want. Characters navigate demeaning jobs, troubling sexual encounters, and ethical conundrums with varying degrees of self-awareness as they move inexorably toward some imagined American dream. Operating mostly in the realm of realism, the collection offers moments of surrealism and horror, musing on the dystopian possibilities of a world inhabited by people who only “‘see what they want to see,’” as one character in the story “Retrospect” puts it, before performing a mind-altering surgery on a willing victim. Publishers Weekly calls Stories No One Hopes Are About Them a “captivating and mischievous debut collection.... Bermudez eloquently and powerfully writes of objectification and exploitation. This is a must-read.” A filmmaker, writer, and coeditor of the Maine Review, A. J. Bermudez has won a Writer’s Digest award, the WeScreenplay Grand Prize, and the Alpine Fellowship Writing Prize. Her first solo-written feature film premiered in 2018, and her next film will shoot in spring 2023. 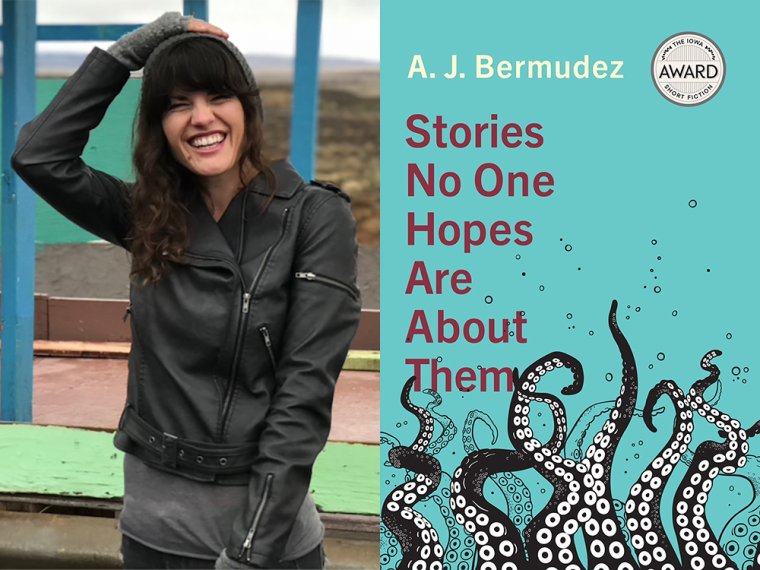 A. J. Bermudez, author of Stories No One Hopes Are About Them.

1. How long did it take you to write Stories No One Hopes Are About Them?
The earliest story in the collection is from 2018, I believe. The process was very fragmentary. I’d begun writing the stories without any vision of an ultimate book, but eventually it started to feel like one. I got excited, started piecing it together, building the collection as a whole—and this phase went very swiftly. It’s possible that I shouldn’t admit this, but I’m not sure I psychologically grasped that this was a book book until the manuscript was in the mail. The day of the deadline for the Iowa Short Fiction Award, I fumbled with page numbers, Instacarted ink when my printer—by all accounts an antique—ran out, scrambled to come up with a binding solution: basically just a parade of manuscript/deadline foibles. I made it to the post office five minutes before it closed. As I left, they were locking the door behind me, and I remember thinking: “Well, I guess I wrote a book.”

3. Where, when, and how often do you write?
I write daily, occasionally with a day off. Mostly at home, and mostly really early in the morning. Although my best ideas come to me outdoors and in the middle of the night.

4. What are you reading right now?
I’m reading a lot of short fiction: the latest issues of Story, the Virginia Quarterly Review, and American Short Fiction are trending on my nightstand right now. Book-wise, I just finished Samanta Schweblin’s Fever Dream and just started Anthony Marra’s Mercury Pictures Presents. I’m still reading The Uninhabitable Earth: Life After Warming, which kind of has to be taken in doses. And—although I’m hesitant to recommend it because it’s impossible to find, albeit well worth the search—Le Malheur en danger by Malek Haddad.

5. Which author or authors have been influential for you, in your writing of this book in particular or as a writer in general?
I always struggle with this question—I’m a bit of a literary scavenger—but am always in awe of the serpentine machinations of Lorrie Moore and the director-like prose of Alice Munro. Any time someone nails the intersection of dark and playful, I’m there. The authors I find most inspiring and influential these days are those who are working, actively, to change the game. Authors like Carmen Maria Machado and Deesha Philyaw come to mind.

6.  What is one thing that surprised you during the writing of Stories No One Hopes Are About Them?
The collection itself, to be honest, came as a tremendous surprise. I didn’t know I was capable of such a thing. On a micro level, I was surprised to recognize how much I love horror, and how much I relate to fish.

7. What is the earliest memory that you associate with the book?
One of the earliest pieces in the collection—and one of my favorites—is “Totenhaus.” At the time that story was first drafted, before it got shined up a bit and went to Black Static, my mother was still alive and would help proofread my work. She was a genius—a very kind genius, it’s worth noting—and also the sort of person who circles typos in the newspaper. There are fragments of other early pieces where I can remember her reaction to some story or other: “You’re brilliant! There’s too much swearing! I’m so proud of you!”

8. If you could go back in time and talk to the earlier you, before you started Stories No One Hopes Are About Them, what would you say?
“I recognize that it’s less glamorous, but you do your best work when 6:00 AM is the beginning of the day, not the end.”

9. What forms of work, other than writing, did you have to do to complete this book?
I’m a nut for research. My publishing dream scenario is for a fact-checker to have no notes. The moment I feel as though I’ve stopped learning during the writing of a piece, it’s usually either finished or dead. And physical embodiment is inestimably important for writers. I used to box, but my current hack for long bouts of writing is breaking them up with stints in virtual reality. Physical exertion, a roller coaster ride, an obscure documentary, whatever: There’s something about that sort of immersion that both ignites the brain and lets it off the hook for a moment. When you’re living intensely in a world, it can be valuable to be reminded of others.

10. What’s the best piece of writing advice you’ve ever heard?
I’ll preface my choice by remarking, partially, on the etymology of conquer: It began, perhaps, with the non-violent ”to achieve” and draws from the Vulgar Latin conquaerere, which includes the notion of victory—no doubt—but also “to search” and “to seek.” The second part of the word is borderline synonymous with query. With all that said, the best piece of writing advice I’ve ever received is from Ernest Shackleton: “By endurance we conquer.”

END_OF_DOCUMENT_TOKEN_TO_BE_REPLACED

“I am only able to write because of consistent and reliable childcare.” —Kate Baer, author of And Yet