This week’s installment of Ten Questions features Alex Dimitrov, whose third poetry collection, Love and Other Poems, is out today from Copper Canyon Press. True to its title, Love and Other Poems swells with tenderness and feeling. “I love writing letters and this is my letter. To the world that never wrote to me,” Dimitrov writes. Despite the misery of the world—“How people are being detained / and shot with our money”—he remains devoted to approaching both cruelty and beauty with open eyes. Turning over familiar subjects—New York City, the moon, sex—and holding them up to the light, he models how to reclaim a sense of wonder and purpose in daily life. Alex Dimitrov is the author of Together and by Ourselves (Copper Canyon Press, 2017) and Begging for It (Four Way Books, 2013). The recipient of a Pushcart Prize and the Stanley Kunitz Memorial Prize, his writing has appeared in the New York Times, the New Yorker, and the Paris Review, among other publications. He and Dorothea Lasky write together as the Astro Poets and published Astro Poets: Your Guides to the Zodiac with Flatiron Books in 2019. 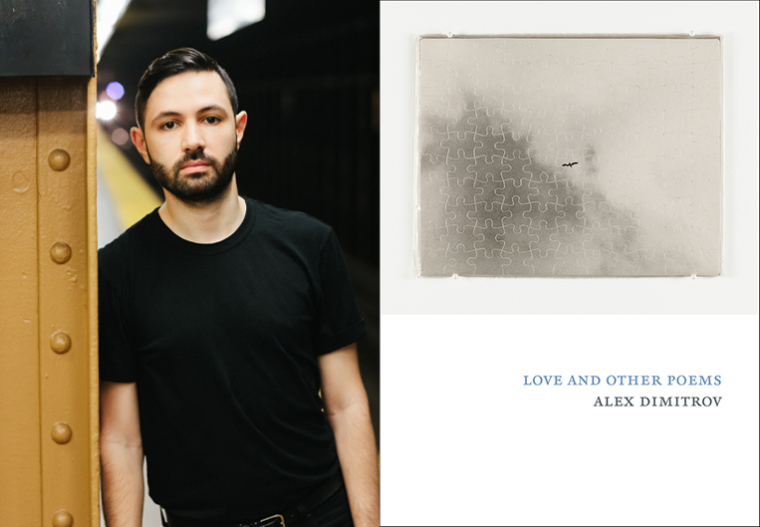 1. How long did it take you to write Love and Other Poems?
I started writing the book in August of 2017. I finished it in March of 2020. It was delayed by almost a year because I kept changing things. I’m a perfectionist.

2. What is the earliest memory that you associate with the book?
I remember meeting a friend for a drink at Old Town Bar on a summer Friday, and walking from there to Lovers of Today in the East Village to meet another friend. It was that hazy, late light of summer. The streets were very hot. And I was happy because I was about to quit my office job and take a big risk. I’d just started writing the title poem, “Love,” which I really believed in.

3. What was the most challenging thing about writing the book?
Not having healthcare or benefits while also having more jobs than I’ve ever had in my life. I think I taught, as an adjunct, at something like six or seven different colleges and universities in the time period in which I wrote the book. Most semesters I taught five classes. The poems came easy compared to that.

4. Where, when, and how often do you write?
I write in my apartment at a white desk that faces a window. I write every day. The time I write changes depending on my schedule. Ideally I read in the morning and write in the late afternoon. Usually I like to go for a late run after I write and then meet a friend for a drink. Having an entire day free almost never happens. Regardless, it’s important to treat writing like a job and be serious about having a routine. Like any job, there are many bad days. But writing is the most important thing in my life. There’s no quitting.

6. What is the biggest impediment to your writing life?
Money.

7. Outside of writing, what other forms of work were essential to the creation of Love and Other Poems?
I want poems to sound as pleasurable as songs and to speak to everyone. I also want them to have an edge and feel cool. I was listening to a lot of sixties and seventies girl groups. Also rock. The Strokes. The Stones. Love, time, and New York City are the big subjects of my work.

8. How did you know when the book was finished?
I didn’t. I don’t know when anything is finished and I’m not sure I want to. I hate saying goodbye and I hate finishing things.

9. Who is your most trusted reader of your work and why?
I send my poems to almost no one. I will occasionally send them to my best friend, who is an art historian, though not for general feedback. Sometimes I have a very specific question about a line or punctuation or a larger idea. I trust her to tell me the truth, as a reader who is interested in both the intellect and pleasure, which is important to me. I care a lot about the reader. I do not take them or their time for granted. I know there are a million other things they could be doing—having sex, eating, smoking. When I have their attention, it’s on me to make it worth it.

10. What’s the best piece of writing advice you’ve ever heard?
Spend as much time alone as possible.

“Commit to completing a scene each time you write” —Randa Jarrar, author of Love Is an Ex-Country

“Every day without fail. Small marks with a pencil.” —Edward Carey, author of The Swallowed Man

“I can’t imagine myself without this book.” —Jana Larson, author of Reel Bay