In these poems you don’t flinch from the terror and carnage of war. But there are also very beautiful, even ecstatic poems of marriage and new fatherhood. What is the role of joy in a poetry of witness? What place is there for beauty and laughter in art that confronts horror?
Yes, many poems in this book have to do with civic strife. But the story circles around the life of two newlyweds, the moments of small joys in a young marriage. It is a book of motherhood and fatherhood; it is a book of private happiness. I am a love poet, or a poet in love with the world. It is just who I am. If the world is falling apart, I have to say the truth. But I don’t stop being in love with that world. 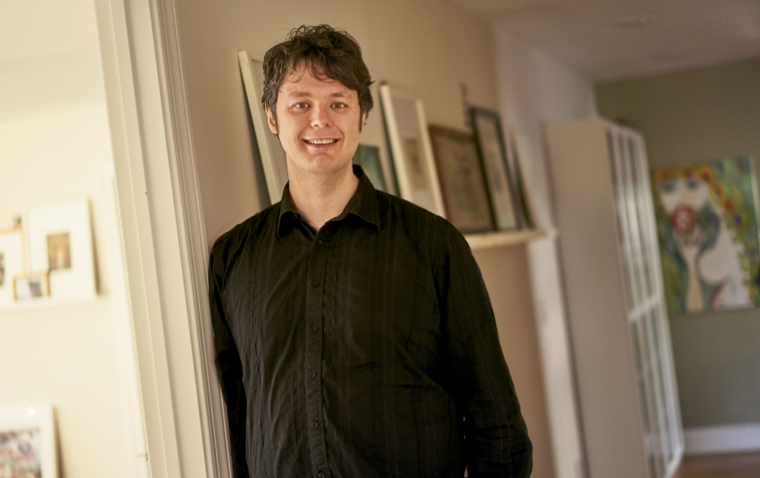 True witness isn’t just about violence and war. To only notice those things is to witness only a part of our existence. But there is also wonder.

I see it as my duty to report this lyricism in the whirl of our griefs. It is a personal responsibility for me: My father was a Jewish child in occupied Odessa who not only suffered, but also learned to dance. He was shaved bald so that Germans wouldn’t notice his dark hair. The Russian woman who hid him, Natalia, hid him for three years. It is not an easy thing, to keep a restless child inside for three years. Natalia taught him how to tango. And so they danced for the three years of that war, in a room where the curtains were always drawn. Once, he escaped outside to play and the German soldiers saw him, so he ran to the market and hid behind boxes of tomatoes. All my friends tell me there are too many tomatoes in my poems. They say there is too much dancing. Is there enough? I don’t know.

Today Ukraine is at war again. I go there about once a year. Donetsk is occupied. In Odessa, that party town, there are terrorist attacks. A café I liked to frequent got blown up hours before I was to meet a friend there. That friend, the poet Boris Khersonsky, gathered neighbors around the ruined entrance to the café and read his poems aloud. Some folks brought food to give away for free.

Even on the most unnerving days there are very tender moments. We have a duty to report them, too.

Here is another image from the early 1990s, from a different war: Transnistria, just sixty-five miles from our apartment in Odessa. I am fifteen years old. People knock on our door saying they fled without a change of underwear, asking to please let them make a phone call. In this chaos people lose their pensions, their homes, but they still go to the city garden in Odessa and dance while old men squeeze their accordions. Old women polka across the street, their medals clinking, beer bottles raised in the air as the rest of us clap from the benches. Time squeezes us like two pleats of an accordion.

Is it foolish to speak of little joys that occur in the middle of tragedy? It is our humanity. Whatever we have left of it. We must not deny it to ourselves.

Your story begins when a boy is shot while he’s watching a puppet show. In the second half of the collection, Momma Galya organizes a resistance movement from her position as a director of the local puppet theater. For American readers, can you talk a bit about the importance of puppet theater in Eastern Europe and about why you made puppet shows so central to your book?
The carnival has often been a feature of rebellion. Puppets serve many purposes—on the one hand, especially here in the States, they make people laugh. But they aren’t just comedians; they are often the tools that bring the sharpest criticism to life, making those in power a laughingstock. They are an art of revolt.

At many points in European history puppetry was blamed for inciting revolutions and forbidden. England, Portugal, Germany, and France had laws criminalizing puppeteers at various times. This is not surprising, as the police state is always nervous of places where people gather together.

When the Czech language was banned in the Austro-Hungarian empire, puppeteers continued performing in Czech as an act of defiance. Later, during the Nazi invasion, Hitler closed hundreds of puppet theaters, but the anti-fascist puppet plays of Karel Capek were staged underground.

In England the puppets Punch and Judy were wildly popular, appearing onstage to laugh aloud at the powers that be and breaking every law. They were the heroes of the poor, gathering huge crowds at fairs. The church and government called Punch the corrupter, and, of course—happily—he was.

In America, we have Bread and Puppet Theater, which is one of the best things about Vermont. They believe in the revolutionary role of public art in a time when so much art has been commodified. They had plays in the time of the Vietnam War, after the Kent State shootings, and during both Bushes’ Iraq wars. And you won’t find it in mainstream newspapers, but here in America, riot police fired bean bag rounds at protesters who refused to disperse after watching puppet shows in Eugene, Oregon, in 2000.

Our reality, like that of Deaf Republic, is as fabulist and mythical as it was in medieval Europe. We just refuse to see it.

Russia’s most famous puppet is Petrushka, a Punch-like figure first played by the skomorokhi, traveling players. In Soviet times, the Sergey Obraztsov puppet theater in Moscow, the largest in the world, was wildly popular. And even in Siberia, in the gulag—as my grandmother, who spent over a decade there, told me many times—there were small puppet theaters put on by the prisoners.

She said when men or women from a puppet theater were executed or died of exhaustion, other prisoners hung puppets on their window, or laid their puppet on their empty bed.

Much of your career has involved making a case for the importance of poetry as a tool of political witness and resistance. I also think, from conversations we’ve had, that you believe poetry is the most powerful mode of human communication across gulfs of time. What are your thoughts on how poetry is able to address both its own particular moment and the no-moment of eternity?
Poetry is the art that smashes the borders of time, to misquote Boris Pasternak. For me poetry is a moment of awe—that silence that travels from one human body to another by means of words. Gilgamesh was written four thousand years ago and it transforms us still. Or take our contemporary Gwendolyn Brooks. She died almost twenty years ago but is perhaps more relevant now than ever before; people feel compelled to make a whole new form—the golden shovel—in response to her music.

This is what poetry is: not a kind of public posturing but a private language of music and imagery that is strange and compelling enough that it can speak privately to thousands of people at the same time.

In poetry, borders of nationhood and time collapse: Sappho and Catullus are just as relevant now as Allen Ginsberg and Claudia Rankine.

The poem is a charm; it must actively cast a spell on the reader now. If it doesn’t, it fails, whether the poem is about a face that launched a thousand ships or about a woman standing in a line outside a prison wall or about plums in the icebox. That freshness of speech ravishes the human in us.

I don’t see any value in asking whether poetry can exist outside of the political. Poetry is not about an event. It is the event. Art is the resistance of complacency: It always stands in opposition to numbness.

That is why it just doesn’t die, poetry—despite so many death notices. It is always there, waking us up when we get numb, poking us in the eye.

Garth Greenwell is the author of What Belongs to You (Farrar, Straus and Giroux, 2016). A new book of fiction, Cleanness, is forthcoming from FSG in January 2020.

Be Bold: A Profile of Ocean Vuong
by Rigoberto González | Feature 6.12.19

Following the acclaim of his debut poetry collection, Ocean Vuong found power in imagination and freedom in embellishment and wrote a stunningly original novel: On Earth We’re Briefly Gorgeous.

My Past and Future Assassin: A Profile of Terrance Hayes
by Hanif Abdurraqib | Feature 6.13.18

In his sixth book, a sonnet sequence published by Penguin in June, Terrance Hayes cuts deep, to the marrow of the American moment, in a form with a razor’s edge: love poems for the forces trying to kill you.

The Poetry of Perseverance: An Interview With Ada Limón
by Carrie Fountain | Feature 8.15.18

In her fifth collection, The Carrying, Ada Limón digs deep down to the roots of what she sees happening in the world today—and she is deeply troubled by what she finds.

Two of the most dynamic poets writing today, both with new collections out, explore issues of poetry and craft, aesthetics and language, luxury and yearning, drag and systematic repression.