Be Bold: A Profile of Ocean Vuong

Ocean Vuong made his literary debut in April 2016 with Night Sky With Exit Wounds, a poetry collection that chronicles a family’s journey as refugees from Vietnam to America, where the poems’ young speaker grows up attuned to the turmoil of his family’s traumas while becoming aware of his sexual identity. Vuong’s meteoric rise in popularity was immediate, and so was the positive critical response to his lyrical voice. 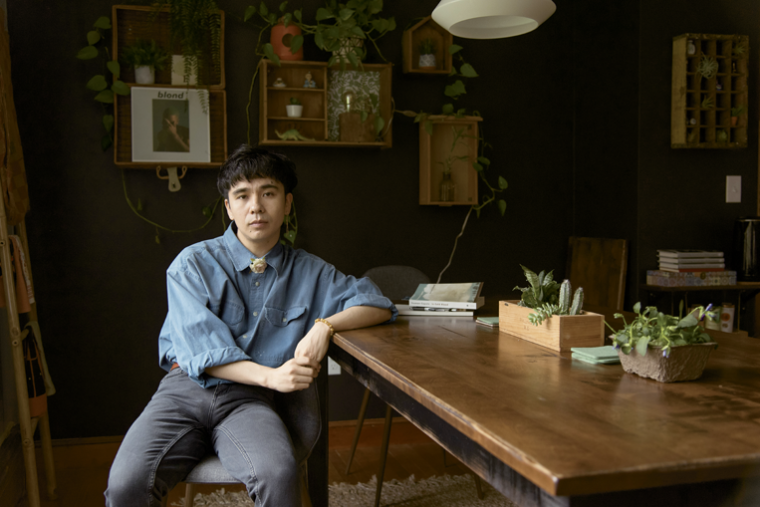 In the New York Times, Michiko Kakutani raved about “his ability to capture specific moments in time with both photographic clarity and a sense of the evanescence of all earthly things.” The book’s warm reception was accompanied by a number of prizes and honors from the Whiting Foundation (Whiting Award), the Lannan Foundation (Lannan Literary Fellowship), the T. S. Eliot Foundation (T. S. Eliot Prize), Publishing Triangle (Thom Gunn Award), Forward Arts Foundation (Felix Dennis Prize for Best First Collection), and others. The New York Times went on to name it one of the top ten books of 2016. All for a first book of poems by a relative newcomer to the literary scene.

Rather than follow it up with another book of poems, however, Vuong shifted gears and turned his attention to a different genre entirely—fiction, in the form of a novel, On Earth We’re Briefly Gorgeous, out in June from Penguin Press. The book centers around the strained relationship between a mother, who struggles with PTSD induced by memories of the Vietnam War and her abusive marriage, and her son, who is contending with his sexuality as he comes of age on the drug-ravaged streets of Hartford, Connecticut. I recently sat down with Vuong to discuss his path from poet to novelist, a story that begins with—as Vuong puts it—“a little gay kid from Hartford, who read in the library with his head down so that people didn’t know he was reading.”

Born in Saigon in 1988 to a family of rice farmers, Ocean Vuong was only two when his extended family left Vietnam and traveled to Connecticut after making a brief stop in the Philippines. The seven-member household included his grandmother, “who would start to sing any time there was conflict,” Vuong says. “Since she was the elder, it cast a kind of spell over us so that we could survive our problems.” The cultural adjustment for this mostly illiterate refugee family was not easy, to say the least. Vuong’s father returned to Vietnam not long after their arrival, and his mother found a job as a manicurist, a profession she still practices. “Everything was erupting all the time,” Vuong recalls, “but it was our shared journey that kept us together.”

Though the Vuongs were the only Vietnamese family in a mostly Black and Puerto Rican neighborhood, they were embraced with generosity and kindness, which made them more comfortable with the reality that they now lived in a different country. “I didn’t know that most of America was white until I was eight or nine,” he says. The concept of white supremacy was encountered much later, when he eventually left the working-class side of Hartford to seek job opportunities as an adolescent in the more affluent and commercial areas of the city.

In the meantime, he was having to contend with two life-changing realizations: that he was gay and that he had, despite a love of reading, dyslexia. The learning disorder is a family affliction; Vuong’s mother and brother also have it. Much later he would find out that so did Octavia Butler and F. Scott Fitzgerald, which helped him reconcile with the possibility of becoming a writer. “I would insist it’s not a setback or an illness,” he says. “It’s just a different angle of looking at language that actually reveals a lot and was very advantageous for me as an artist.”

Vuong says he also sees his queerness as a source of strength in the way he thinks about the world. “For queer kids, when the world around you is dangerous, you go into your own refuge,” Vuong says. For him it was books. Coming out to his mother, however, was a different kind of challenge—one that he didn’t think would end well for him. In fact he was prepared for the worst and planned his exile from his family.

“I waited until I was seventeen,” he recalls. “I had enough for a bus ticket and $2,000 in my pocket saved up from my job at Panera Bread. I had my bag with me when I sat down with my mother. I was ready for rejection.” But that rejection never came. At this point the family had already suffered serious losses to drug overdoses, victims of the opioid epidemic that was affecting this working-class community, a harsh reality he weaves into his new novel. “Where would you go?” his mother asked. “What would we do without you?”

Relieved, Vuong set down his bag and began to imagine a future in Hartford the way his family had so many years ago. His mother suggested he try college first because her son “had a belly full of English.” And if not, she suggested, “You can always come work at the nail salon.” Vuong jokingly adds, “I thought, ‘Well, it’s not a bad job. Where else can you work and watch Oprah all day?’”

His time at Manchester Community College was brief but instrumental in changing his perceptions about who had the right to dream big. “I was fortunate to walk into my first class, a composition course, and be met by single mothers, people with two jobs, people in their forties—all walks of life—and it felt like for the first time I saw a teacher have faith in this community of outsiders, investing in our imaginations, and challenging us,” he says. “Folks that were not supposed to be having these discussions were allowed to.” By now he had started to keep a journal, feeling the magnetic pull to poetry—Rimbaud, Lorca, Vallejo, Neruda—copying poems from library books to his notebook because he couldn’t afford to buy books of his own.

Encouraged by his community-college education, Vuong decided to pursue a degree—one that could eventually lead to a job that would help his family—so in 2008 he enrolled in business school at Pace University in Manhattan. After two weeks, keenly aware that he didn’t fit in among the men in business suits and internships, he dropped out. “I still had my library card,” he says, “so I rekindled my love of reading. But I also began attending open mics to read from my scribbles in my notebook. I wasn’t ready to call it poetry.”

It was at one of these events that he heard about MFA programs, in which he could not only nurture his passion but perhaps also fund it. He was also eager to get back to college so he could stop deceiving his mother about his activities in New York City. Unbeknownst to her, he had been couch surfing since leaving Pace. But first he needed to complete his undergraduate degree. “I applied to the most affordable place I could find: City University of New York,” he says. He ended up attending Brooklyn College.

Although he credits Brooklyn College with giving him access to the literature he needed to finally feel well-read, it was the cafés, bookstores, and other venues that held poetry readings that gave Vuong the community he was looking for, forging friendships that fortified his resolve to keep going. “I met Saeed Jones,” he recalls, “who was fabulous and glorious, with a big, hearty laugh. And when he told me he was attending an MFA program at Rutgers in Newark, I knew that it was possible.” Soon after, he connected with poet Eduardo C. Corral, who at the time was living in his family’s double-wide in Casa Grande, Arizona, working at Home Depot, and running a popular blog called Lorcaloca. Corral’s blog gave Vuong a glimpse into the ways the writing profession welcomed or rejected writers of color. When Corral announced he was moving to New York City in late 2011, Vuong knew this too was a sign: “We had similar stories—both of us gay boys from working-class immigrant parents. He became a kind of mentor because his journey was like a map for me.”

Corral recalls their first meeting: “Ocean’s attentiveness is what first caught my attention. He was kind and curious, always asking questions, eager to listen, to learn. This attentiveness also extended to language.” Since then they have stayed in touch, though Corral contends that theirs is a bond not forged by literary success but by the amazing truth that they are sons of non-English speakers, who have been able to shape careers and help their families financially through a profession that, in effect, excludes their loved ones. “We now get to write about our immigrant families and claim a place for them in poetry,” he adds.

A Great Good: An Interview With Jacqueline Woodson
by Rigoberto González | Feature 8.17.16

Upon the release of Another Brooklyn, her first novel for adults in twenty years, award-winning author Jacqueline Woodson discusses New York City’s literary legacy, the strength in being a person of color, putting humanity on the page,...