A Great Good: An Interview With Jacqueline Woodson

Jacqueline Woodson is the author of more than two dozen acclaimed books for young adults, middle graders, and children—a body of work that places African American characters at the center of richly drawn narratives that have helped young readers engage with real-life situations such as interracial relationships, child abuse, poverty, and homosexuality. 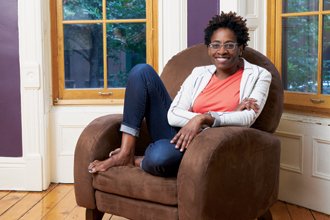 Her own childhood story—she was a precocious daughter of parents in a troubled marriage, who found solace in the imaginative world of books, and eventually in writing—forms the basis of her New York Times best-selling memoir Brown Girl Dreaming (Nancy Paulsen Books, 2014), which won a National Book Award, the Coretta Scott King Award, the Newbery Honor Award, an NAACP Image Award, and the Sibert Honor Award. Brown Girl Dreaming also traces Woodson’s journey from Ohio to South Carolina to Brooklyn, an eye-opening childhood in which she learns, among other things, about the regional differences of the black experience during the 1970s.

With the release of Another Brooklyn (Amistad), her first adult novel in twenty years, Woodson revisits that important period of dramatic social changes. August, a young black girl who moves with her father and brother from Tennessee to the culturally rich Brooklyn neighborhood of Bushwick, comes of age during a time when her empowerment as a black woman offers new freedoms as well as familiar demons: classism, racism, and sexism. Another Brooklyn follows August as she learns the hard lessons of adolescence, uplifted by the strength of her girlhood friendships and guided by her family’s religious conversion. All the while, the terrible truth of her mother’s fate back in Tennessee weighs heavily on her emotional well-being.

I sat down with Jacqueline Woodson at her home in the Park Slope neighborhood of Brooklyn for a conversation about her new book, New York City’s literary legacy, gentrification, Islamophobia, and happiness.

The dedication of Another Brooklyn reads “For Bushwick (1970–1990) In Memory,” which covers the span of August’s coming-of-age in the novel. The reader also gets to observe Brooklyn come of age, as it negotiates the changes and challenges of those eras, through the perspective of a young black woman—a point of view that’s relatively absent from the portrayals of Brooklyn in literature. What drew you to tell this story at this stage of your career? Why this book now?
The Bushwick that’s on the page is a true place, as it exists in the book. I wanted to put that on the page in its true existence because when a neighborhood becomes gentrified, its new inhabitants think they’ve discovered someplace new, but that place had a story before them. Bushwick is its own character, and this book is one of its biographies. I wanted to pay homage to the Bushwick I grew up in, so my dedication also suggests this book is an elegy to a place and time that is no longer with us. Overlaid on that biography is the narrative of the four girls, which is fiction. After having written Brown Girl Dreaming, which is a memoir, I really wanted to move away, just for a moment, from children’s literature and explore something I felt was invisible, which is the story of the black girl in Brooklyn.

In the novel, we meet August as an adult looking back at the place where she grew up. But what does Jacqueline Woodson have to say about the Bushwick of today?
August in the book is looking back with a kind of melancholy or longing for this intensity of that period she lived through. Jacqueline Woodson looking at the place now—I look at it in wonder because I still go to my old neighborhood a lot and I’m just surprised by the fact that I grew up with white flight. Most of New York City was on the edge of white flight at the time, but now I’m watching the reverse of white flight, with white folks coming back into the neighborhoods their ancestors fled from. It makes me marvel at how cyclical everything is.

I’m trying to place Another Brooklyn as part of the borough’s writer-of-color lineage. I see Paule Marshall’s Brown Girl, Brownstones, published in 1959, and there are a few contemporary works, such as Daniel José Older’s Shadowshaper, but one has to really dig hard to find those narratives that are not centered on white characters. What areas need that literary attention in order to expand what is celebrated as Brooklyn’s—and New York’s—cultural heritage?
There is so much territory left to explore in New York City in general. I feel like Brownsville is not on the page, East New York is not on the page; there are stories from the Bronx and Harlem, but since Down These Mean Streets by Piri Thomas not enough books about the black NYC experience are getting talked about. DJ does a great job in Shadowshaper, writing the black Latino perspective on the page, but we need more. Even in the Bushwick I grew up in there was a larger Dominican, Puerto Rican, and Ecuadorean population—I would love to see those stories, that Brooklyn.

And I’m even remotely interested in the vision of the kids of the hipsters who are growing up in those neighborhoods now. I know their stories are not going to be my story because of our differences in class and race, but I feel they too are part of all of these deep pockets that are not represented. I’m waiting for more stories from Queens—from Jackson Heights and the Hindu population. There’s so much that still needs to be told in order to shape this city in a way that’s nuanced. We still have a pretty flat narrative.