Be Bold: A Profile of Ocean Vuong

In 2014, prompted by his intimate but influential writing community, Vuong applied to MFA programs, but only in the New York City area because he wanted to remain close to friends. He chose NYU because it offered him funding without teaching obligations. But on that fateful first day of class, he received a call from Michael Wiegers at Copper Canyon Press, letting him know the press had accepted his book for publication. “What people don’t understand,” Vuong says, “is that I had been working on Night Sky With Exit Wounds for eight years. And one of the reasons I sent my manuscript to that press was that they promised a personal rejection, and since I wasn’t enrolled in school yet, I was craving feedback.” 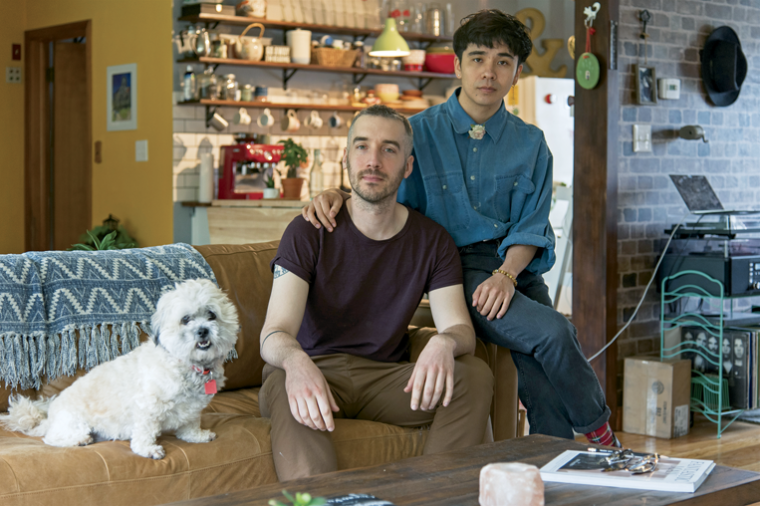 Ocean Vuong and his partner, Peter Bienkowski, along with their dog, Tofu. (Credit: Jon Crispin )

For Wiegers there was no doubt the manuscript needed to be in the world. “I was struck by his ability to risk toeing the edge of sentimentality, without crossing over it,” he says. “His poems were open and vulnerable and bold enough to take on the big topics of love and grief and war and familial legacy. These were gentle poems that were graceful and confident—and did not need to perform themselves toward the deep desire they contained.”

The prospect of publication would give Vuong something tangible to show his mother. “Since my mother could not read, I insisted that the book have my picture so that she could see it was really me and show all of her customers at the nail salon,” Vuong says. A few days later, Don Share from the Poetry Foundation called to offer him the $25,800 Ruth Lilly Prize. The timing was perfect for Vuong, who could now proceed with confidence, fine-tuning his book for the next two years without dealing with financial stress or the anxieties of an uncertain future. Two years later, Night Sky With Exit Wounds was published to considerable fanfare.

Besides giving his mother a book and, after years of financial hardship, a down payment for a house, Vuong also had the opportunity to show her a bit of the literary world he had just entered: “She has come to a few of my readings, and she sits in the room so that she can look at the audience responding to my work. She calls me a scholar, not a poet, because in Vietnam, scholars are revered.” What did he get for himself after that flurry of fellowships? “My only splurge was a coat,” he says.

Vuong, who now lives in Northampton, Massachusetts, credits his Buddhist upbringing with his ability to navigate all the attention in stride. He meditates five times a week and keeps reminding himself of the person he was when he first fell in love with writing. “I bring him to the present,” Vuong explains, “not the person who won the awards—he has nothing to teach me. So when people ask what is the secret of my success, I say Submittable.”

He has maintained this sobering stance as he steps into the role of teacher and mentor at his new job as assistant professor of English at the University of Massachusetts in Amherst. “I tell my students that I didn’t have a social life. I had a library card,” he says. “I sit down with them and ask them to privilege intention over motivation.” But he admits it’s a challenge to keep students focused on the art of writing during the era of social media, which he believes fuels competitiveness.

“My interactions with Saeed and Eduardo and Rickey Laurentiis were important, but afterward I went home to the page, not to Facebook or Twitter,” he says. Nevertheless, he is determined to give his students the kind of positive experience he had with his own teachers like Ben Lerner, Yusef Komunyakaa, and Sharon Olds.

What also keeps him centered is the reality of his family’s urgencies. “They still need my support,” he says, particularly now as the current administration implements a policy to revoke residency from Vietnamese refugees deemed “violent-crime aliens.” Vuong says, “Those are my people! We come from a troubled history, and with such trauma come problems. It’s unfair to penalize a community for an affliction exacerbated by this country’s participation in the Vietnam conflict.” While he waits to find out how these policies will directly affect his family, Vuong turns to his first love, poetry, for solace. In May 2018 he partnered with the Smithsonian Asian Pacific American Center to launch the Center for Refugee Poetics at the Asian Arts Initiative, an organization and venue in Philadelphia, with a day of activities exploring poetry and the refugee experience. Its next symposium has yet to be scheduled, but the center hopes to expand the reach of the conversation, which began with the Southeast Asian refugee diaspora.

With the publication of an acclaimed debut comes the inevitable expectation of the second book. Shortly after the release of Night Sky With Exit Wounds, as the accolades came pouring in, Vuong was courted by a number of literary agents, who suggested he write prose. But Vuong hesitated moving on from his previous project when deep inside he knew, he says, that the first book, “an eighty-five-page paperback, did not answer all of my questions. How does it contain everything I have been asking all of my life, like what does it mean to be a queer American body, or poor, or a refugee?” So he decided to investigate those concerns further in a different genre, to find out if he could learn anything new.

While on a residency in Italy, courtesy of the Civitella Ranieri Foundation, Vuong found himself browsing the castle’s extensive library, where he connected to other poets who also wrote prose, such as Anne Carson and Maggie Nelson. “I realized then that I wasn’t out in the sea by myself,” Vuong says. “Poets have been there and thrived with the sentence and the paragraph.”

Vuong chose to explore fiction writing because he wanted “the book to be grounded in truth but realized by the imagination. That’s why the opening chapter reads like an essay.” He also credits his education as a poet with the skills necessary to move into prose. In both he could “orchestrate an entire world,” he says. Nonfiction, he notes, would have presented issues he wanted to avoid: “As a person of color, when it comes to memoir, we are seen as anthropological conduits, a vehicle of exotic information. I wanted to insist on agency as an artist, with the freedom to embellish, and then claim it as my own rendition.”

An early role model was Maxine Hong Kingston, who had set out to write the great American novel but whose book The Woman Warrior (Knopf, 1976) was presented as nonfiction. He decided not to erase that effort and succumb to the pressure to write a memoir. “I wanted to insist that these lives—yellow, brown, poor—inspired me to create art as I wanted to create it, not as others wanted me to create,” he says.

Page after page, he allowed memory to shape the fabric of the fictional narrative. He understands the impulse of readers to want to make direct connections between the writer and the writing, and he expects many will also want to draw lines between the poetry book and the novel, but that’s beyond his control. He’s more invested in his right to invent. “Writers of color are not supposed to have the musculature of an imagination,” he says. “When we use it, we’re being bold, and that’s what I want to do—be bold, make things up. I’m not here to give people the juicy bits of my community. I’m not a journalist; I’m an artist.”

That said, he set out to write a book with a clear mission: “I wanted a voice in the conversation about what it means to be a body inhabiting this incredibly complicated, violent, and precarious country.” His inspiration was the community he hailed from: “When I moved to New York City and I’d tell people I came from Connecticut, there was this perception that I had come from a place of wealth. But I was a refugee. So I wanted to expand on working-class identity in a place where people lived rich and diverse lives. There are immigrant populations from all over the world in Connecticut. I want to shift the telescope and show that this world has always existed.”

Two years and four drafts later, a manuscript of the complete novel made its way to Frances Coady from the Aragi Agency. “I explained to Frances that I was a poet, that a poet doesn’t submit anything until it’s finished,” he says. For Coady, it was worth the wait: “When I read an early draft of On Earth We’re Briefly Gorgeous, I experienced one of those glorious privileged moments in publishing when you know that what you are holding in your hand will affect readers in the most profound ways you can imagine.” The novel was sold to Ann Godoff at Penguin Press in April 2018.

Though the book was acquired for a notable sum, Vuong doesn’t want to dwell on that. He’s got more immediate concerns, like his family’s well-being—“the distress signals arrive and I have to answer,” he says—as well as his own. Diagnosed with agoraphobia, an anxiety disorder in which one experiences fear of places and situations that might cause panic, helplessness, or embarrassment, which at times keeps him from performing the most basic functions, like going to the grocery store, he has had to rely on his partner, Peter Bienkowski, for support. A former copyright lawyer, Bienkowski quit the profession to help Vuong through the demands of travel and presentations. He drives Vuong to and from the university so that he can teach his courses and meet committee obligations, because, as Vuong admits, “I failed my driver’s test five times.” On difficult days, Vuong stays home, at the cost of canceling appearances or meetings. “People have been surprisingly understanding,” he adds.

As for his own expectations with the release of his novel, Vuong doesn’t care to fantasize about its future or the rewards that might come with further success: “I don’t see myself as a success story even though I’ve experienced success. Everything I learned along the way was a strength. If I didn’t have my communities, that many consider broken or forgotten, I wouldn’t be where I am. I don’t want to be a sob story or anybody’s project. I want to show that you can have pride no matter where you come from and joy without forsaking the pain it took to get here.”

Rigoberto González is a contributing editor of Poets & Writers Magazine.

A Great Good: An Interview With Jacqueline Woodson
by Rigoberto González | Feature 8.17.16

Upon the release of Another Brooklyn, her first novel for adults in twenty years, award-winning author Jacqueline Woodson discusses New York City’s literary legacy, the strength in being a person of color, putting humanity on the page,...