My Past and Future Assassin: A Profile of Terrance Hayes

One can make a home wherever the body finds itself at rest. I imagine this to be true always, but especially now, while taking in the large plastic novelty fish hanging high on the wall above the head of Terrance Hayes. Even while slouching in his chair, Hayes towers above the table in front of him, so that the fish, a marlin, appears as a crown under the glow of red light humming overhead, darkening half of the marlin and half of the face of the poet. We are at Great Jones Cafe in lower Manhattan, a place Hayes told me is his “go-to spot” when we spoke earlier, trying to nail down where to meet. When I arrive, I find him alone in a corner, drink already on the table. Hayes is a Southerner at heart, having spent his childhood and early adulthood in South Carolina, so it comes as no surprise to find out why he has led me here, to this place he tells me he comes to every weekend, often alone. “I didn’t know how quiet it would or wouldn’t be in here,” he tells me as I sit down, in reference to my request that we find a low-key location for our interview. “But it’s the only place in this city where I can get good grits, so it’s one of the few places in this city I love.” I imagine this to be his way of welcoming me into a small corner of his home. 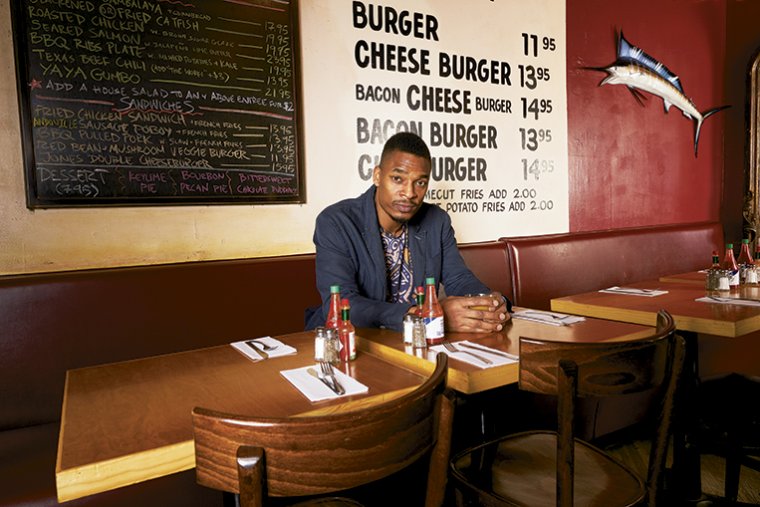 We are talking about primary colors, Hayes and I. He is describing for me his most recent project. His poems were commissioned by composer Tyshawn Sorey for Cycles of My Being, a song cycle that “explores the realities of life as a black man in America” (or so it is described in the publicity material), performed by renowned tenor Lawrence Brownlee at Carnegie Hall, Opera Philadelphia, and Lyric Opera of Chicago. So Hayes sent Sorey some work to be played in front of a mass audience. He tells me he agonized over which poems to send—“you know how I am with this shit; nobody knows what poems are except for poets,” he says—and eventually bent to the will of the composer, who had asked Hayes if he had any poems about hope, or about hate. Hayes balked at the idea.

This story is less about the song cycle for me and more about what is happening with the interior of Terrance Hayes. “I’m not interested in primary colors,” he tells me when I ask him why he has no interest in hope or hate. “It’s not nuanced enough. I’m interested in the spaces where colors overlap. It’s like when people call someone a racist and think that’s the end of it. That ain’t the end. Racism is a symptom of fear, or greed, or some other bullshit. So even if I wrote a poem about hate, it ain’t gonna be about hate when I’m done with it. My personality likes a challenge, so I can write a poem that many would consider hopeful.”

“But aren’t you a hopeful person?” I ask.

“Am I?” he shoots back playfully, smiling before sighing and stirring a small tornado into his drink with the tip of his straw. “I mean, the endgame is always going to be death, so how hopeful can anyone really be?”

We are talking about death, Hayes and I. Or, it seems, death is the river’s mouth our conversation is flowing into. This makes sense, in some ways. We are here to talk about his new book of poems, American Sonnets for My Past and Future Assassin, published by Penguin in June, which is overwhelming in every sense. Overwhelming in its brilliance, yes, but also overwhelming in its pacing, its style. Each poem is the exact same length—a sonnet’s requisite fourteen lines—and carries the exact same title: “American Sonnet for My Past and Future Assassin.” The book, despite its breadth and clever turns, is a confrontation. Not an unwelcome one but a confrontation nonetheless. Hayes is too crafty to force his way, unwanted, into a room, so his poems are like the slow and steady picking of a lock, until the door handle clicks. Instead of entering, the poet stands outside, satisfied with his work.

Hayes began the process of writing the sonnets with inspiration from Wanda Coleman’s American Sonnets series. Coleman’s sonnets, much like Hayes’s own, are winding, endlessly questioning, and rich with syntax and alliteration. A stunning formalist, yet inventive and often two steps ahead of her peers, Coleman, who died in 2013 at the age of sixty-seven, spent much of her life as a poet struggling to make a living from her craft. Born and raised in L.A.’s Watts neighborhood, Coleman worked several odd jobs until her poems began to take off, and even then it was hard for her to make ends meet. Her hustle manifested itself in her poems; chasing new ways of crafting a poem became a form of survival. She was a mentor to some and an inspiration to many more, but Coleman wasn’t always granted the acclaim she deserved. Her work—unlike the work of Hayes—wasn’t fully celebrated until after her death.

Hayes is gathering his roses while he is still alive to grasp them—thorns and all. One such thorn: Hayes, who now lives in New York City after several years in Pittsburgh, where he taught at the University of Pittsburgh and was codirector of the Center for African American Poetry and Poetics there, appreciated the love he was shown in the smaller city but notes that it became overwhelming. “They had my face up in the airport,” he says. “I couldn’t handle it.”

This is not to say that Hayes is entirely humble, however—nor should he be. But he is grounded, possessing a healthy blend of logic and confidence. You know the long list. The author of six poetry collections—Muscular Music (Tia Chucha Press, 1999), Hip Logic (Penguin, 2002), Wind in a Box (Penguin, 2006), Lighthead (Penguin, 2010), How to Be Drawn (Penguin, 2015), and now the new book—he has won much of what a poet can win, including the National Book Award for Lighthead; the Kate Tufts Discovery Award for Muscular Music; a Whiting Award; an NAACP Image Award; and fellowships from the National Endowment for the Arts, the Guggenheim Foundation, and the MacArthur Foundation. He is also a chancellor at the Academy of American Poets. All that and he’s still relatively young, just forty-six years old. Young enough to have decades of future success but old enough to have watched skilled but less decorated writers die, without much control over their legacies.

As for his own legacy, Hayes tells me that he is most concerned with how he’s viewed as a teacher. He is at NYU now and finds himself at home in the classroom. He tells stories about his talented students and how there is a mutual pushing and pulling forward. None of it is about money, he tells me.

“This is why I just want to leave my kids my poems,” he says, referring to his two children. “I want to leave them art.” He pauses and references something he recently mentioned to his ex-wife, the poet Yona Harvey. “Money is nothing to be governed by, because once you get it, it’s never enough. When I die, I want my kids to have my art. Surely that will be worth something one day.”

Terrance Hayes reads three poems from his new collection, American Sonnets for My Past and Future Assassin, published in June by Penguin.