Sam Sacks grew up in Silver Spring, Maryland, studied literature at Tufts University, and received his MFA in creative writing at the University of Arizona in Tucson. In 2005 he moved to New York City and worked for years at various bookstores, including the Strand and Housing Works Bookstore, where he still can be found every Saturday volunteering. In 2007 he cofounded the online literary journal Open Letters Monthly, which he edited for ten years, and today he is an editor at its sister site, Open Letters Review. He started writing the Fiction Chronicle column for the Wall Street Journal when the paper inaugurated the weekend Books section in September 2010. His criticism has appeared in Harper’s, the London Review of Books, the New Republic, Commentary, the Weekly Standard, Prospect, Music and Literature, and the New Yorker’s Page-Turner. 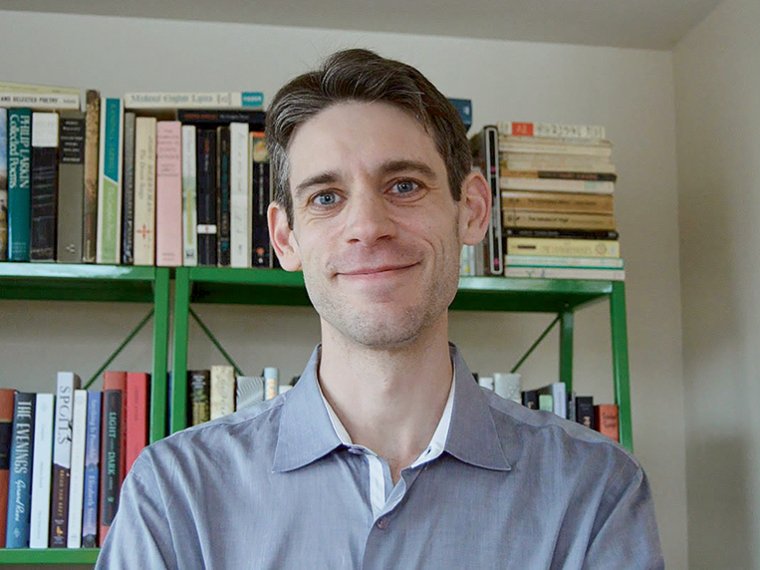 What path led to you becoming a literary critic?
I’m the product of the vanishing, much-lamented free city weekly. After college, on the encouragement of a friend, I wrote a book review that was published in Pittsburgh’s secondary alternative newspaper Pittsburgh Pulp. As I moved around in the years that followed, I kept writing reviews for beer money at places like Flagpole magazine in Athens, Georgia, the Tucson Weekly, the Las Vegas Weekly, and the New York Press. Around the time that this kind of outlet started drying up for me I cofounded, with Steve Donoghue and John Cotter, an online literary journal, Open Letters Monthly. This wasn’t quite the earliest Wild West days of online book blogging and reviewing, but it was early enough that it was still possible to throw together a site without any money and get it taken seriously on the strength of the writing alone. It’s here that I started writing much longer criticism, with the added motivation of wanting to make the site a success. After a few years I had built up a pretty extensive body of work and started to get paying gigs, and through some ridiculous good fortune, the gigs turned into viable full-time employment.

You review fiction exclusively. Is this by choice?
Fiction is what I love most and understand best, but the exclusivity is more a reflection of my role at the Wall Street Journal, which is to write a column reviewing the week’s new and noteworthy literary fiction. If I had unlimited time—and some allowance to learn on the job—I would happily review criticism, literary biography, travel writing, nature writing, essays, poetry, and who knows what else.

You’ve reviewed quite a lot of fiction in translation and novels and short stories published by small presses. Is this the kind of work you personally prefer?
I sometimes wish I could wave a magic wand and erase these kinds of distinctions from readers’ minds, my own included. I know that categories are necessary for marketing purposes and that readers can find them useful, but it dismays me that translated and small-press fiction gets balkanized into highbrow genres aimed at narrowly selected audiences. If I review more of these books than some critics, it’s only because I do my best to treat them as though they’re no different from more mainstream books. Which they’re not, in the important ways. Good books are good books and are for everyone.

How many review copies do you receive per week, and of those how many are you able to review?
I’m not quite sure because they’re all sent to the Wall Street Journal. There the editors set apart the fiction for me, and I go in once a week to sort through the new arrivals and organize them by month of publication. The publication calendar I made for July, which is a somewhat light month, had fifty-three titles. Then I fill a tote bag with books I’ll want to read or read into—I generally bring home ten to fifteen books every week. On average I’ll end up reviewing three of them.

How many books do you read each week for work?
Same amount—usually three books a week.

Is there anything from the publishing side that raises your interest in a particular book or author—the size of the advance, notable blurbs, your relationship with an editor or publicist?
I do my best not to think about extra-literary things like that because they tend to make me irritable, which is not a good frame of mind to have going into a book. Blurbs particularly annoy me because of the way they parody actual reviews, though I realize I should lighten up. Naturally I pay attention when publishers really get behind a book. But personal recommendations are the most helpful. Publicists and editors are first and foremost book lovers, and it’s hard not to want to share in their excitement when they get genuinely enthused about something they’re bringing out. This also makes the din of prepublication acclaim more manageable, because an honest publicist can play the “genuinely enthused” card only so many times.

Have you ever changed your mind about a book that you praised or panned years earlier?
Not that I can think of. But this is really just because I rarely have time to reread contemporary novels I’ve already reviewed.

Has a work of criticism ever changed your opinion of a writer’s work?
Yes and no. Nothing can take the place of a direct encounter with a book. But if criticism doesn’t lead me to change my own judgment, it wonderfully broadens my understanding and appreciation of what a writer is doing. Take Philip Roth, a writer about whom everyone has an opinion. I have never enjoyed his books, and when I read them I have great difficulty seeing past what I think are massive limitations: the self-pity, the blaming, the absence of doubt or introspection. But because of the wonderful criticism I have read of him—by Wyatt Mason, D. G. Myers, Claire Messud, Laura Tanenbaum, and countless others who aren’t immediately coming to mind—I have a deepened respect for his importance to the canon: for the liberating power of his anger, for his willingness to change his style, for the uncompromising nature of his view of life, and so on. This is, incidentally, why literature is so enriching—we experience it subjectively and objectively all at once. Every book is both personal and communal, so the possibilities of interpretation are endless.

What is your opinion about the value of negative reviews?
Negative reviews are healthy, stimulating, completely necessary. In my view there are fairly stringent moral prohibitions against judging people in life, but art is where one can love and hate at passionate extremes. When I have regrets about my own reviewing, it’s usually when I’ve shied away from negativity into some featureless middle ground. I should say that the best negative reviews are not simply hatchet jobs but pieces that use a book’s weaknesses or transgressions to illustrate a larger idea.

If you could change one thing about the book-reviewing process or the world of literary criticism, what would it be?
I wish reviewing paid more. This isn’t a passive-aggressive complaint about my own lot, by the way. As mentioned I’m exceptionally fortunate to make a living as a critic. Most people can’t. God bless the exceptions, but most outlets don’t pay enough to justify the work and time that goes into a long, involved work of criticism, meaning that countless important pieces have gone unwritten for lack of fitting compensation.

Social media—is it helpful or a hindrance?
I’m only on Twitter, and I use it only to procrastinate, unfortunately. I admire people who make it work for them.

Which book critics, past or present, do you particularly admire?
It’s more fun to stick to the present. The most important thing for a critic is to have a regular berth somewhere, and, notwithstanding my earlier lament about money, there are more really good placements than is widely recognized. I make a point to read everything by Lidija Haas at Harper’s, Christian Lorentzen at New York, Andrew Ferguson at the Weekly Standard, Sarah Nicole Prickett at Bookforum, Barton Swaim on political books for the Wall Street Journal, the two recent hires, Parul Sehgal and Jennifer Szalai, at the New York Times, Katherine A. Powers at the Barnes and Noble Review, and, maybe my favorite, Colm Tóibín at the London Review of Books.

What books that you aren’t reviewing are you most looking forward to reading in the near future?
I let the serendipity of used bookstore browsing decide most of my non-work reading, so I’m not sure. But I do have two books on my phone that I’m slowly reading during the interstices of the day: The Mixer by Michael Cox, a history of soccer tactics in the English Premier League, and The Novel: A Biography by Michael Schmidt. I’m up to the chapter on Fanny Burney. It’s delightful.

Reviewers & Critics: Laila Lalami of the Nation
by Michael Taeckens | The Practical Writer 4.11.18

A novelist and critic discusses the book reviewing process, the role of social media in literary criticism, and much more.

The digital deputy editor of GQ discusses his Best Books of the Month feature and the state of diversity in publishing.