Ismail Muhammad, the criticism editor at the Believer, is one of the sharpest young critics working today. Pick up any recent issue of the bimonthly literary magazine, published by the Black Mountain Institute in Las Vegas, and you’ll get a sense of his curatorial eye; for an inspiring jolt from his exquisite writing style, check out his recent Paris Review Daily essay, “On John Coltrane’s ‘Alabama,’” and his 2019 essay on Literary Hub, “Walking With the Ghosts of Black Los Angeles.” 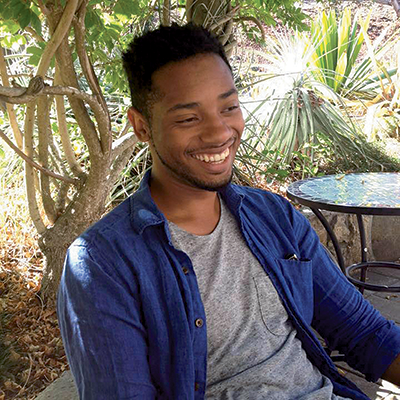 Muhammad is also a contributing editor of ZYZZYVA, a contributing writer at the Nation, and a member of the board of the National Book Critics Circle. His work, which focuses on literature, art, identity, and Black popular and visual culture, has appeared in the New York Times, the Atlantic, Slate, New Republic, Dissent, Bookforum, and the Los Angeles Review of Books. In addition to writing long-form pieces on James Baldwin, Zora Neale Hurston, and Toni Morrison, he has reviewed books by Durga Chew-Bose, Ta-Nehisi Coates, Teju Cole, Harry Dodge, Ottessa Moshfegh, Jenny Offill, and Jesmyn Ward, among others.

Muhammad grew up in South Los Angeles and attended Columbia University. After teaching middle school in Los Angeles, he enrolled in the English PhD program at the University of California in Berkeley. A recipient of the National Book Critics Circle Emerging Critics Fellowship and a Simpson Family Literary Fellow, and a participant in workshops at VONA (Voices of Our Nations Arts Foundation) and Tin House, he is currently working on a novel about the Great Migration and queer archives of Black history.

You are wearing many different hats right now. How would you describe your roles at the Believer, the Nation, and ZYZZYVA?
At the Believer I edit the Field, our version of a reviews section. Calling it a reviews section is a little misleading—I think of it more as a section for cultural criticism, and sometimes recent releases are the excuse for letting someone write about an idea they’ve been tossing around in their head. I’m more interested in review essays than straight-ahead reviews, so I seek out writers who can use contemporary art objects as a way to parse out some aspect of our culture that I’ve never thought about before. At ZYZZYVA I feel like kind of a helping hand the editors can call upon if they need something specific. My role there is very informal, but I’m very proud to be a part of the publication. I grew up reading ZYZZYVA, so it’s special to me. With the Nation, I contribute some writing from time to time, mostly review essays on books.

How many review copies, digital or physical, do you get on average each week? And of those, how many are you able to assign for review?
I get…so many review copies. Like sometimes up to fifty a week. Given the nature of the Believer—we publish bimonthly, and I like to commission work on art, film, and music as well as book reviews—I can’t assign most of them. I’d estimate that I end up assigning less than 10 percent of all the review copies I get.

What’s your reading process like? How many books are you typically reading at any given time?
I tend to read widely, like three or four books simultaneously. I’ll read something for a hundred or so pages to decide if it might be something I want to assign or write about myself. If it doesn’t seem like it’s my kind of thing by then, I’ll probably set it aside. But sometimes there are books I love and devour but just cannot write about, for whatever reason. There are a lot of those. I wish I had more time to write reviews.

Is there ever anything from the publishing side—notable blurbs, a sizable advance, your relationship with an editor or publicist—that raises your interest in a particular author or book?
Genuine enthusiasm for a title always appeals to me. If a publicist’s language or a blurb conveys, like, “I can barely control myself” excitement for a book, then I know that a title really moves someone and that it might move me. Relationships with publicists matter, of course. If a publicist tends to speak to me honestly, and in their actual voice, about a title, then I know that whatever title they’re calling my attention to is something I might want to move to the top of my pile.

How conscientious are you about diversity—gender, race, sexual orientation, etcetera—when choosing which books to assign for review?
I’m very conscientious about presenting diversity to the magazine’s readers when I assign reviews. I want to give opportunities to a diverse set of writers, not just because diversity is a box to check, but because it’s important that the conversations happening in our magazine expose readers to challenging ideas that they might not have considered. And I want to make sure that I cover a diverse set of books, art, music, and films. I have to balance all of this as I put together my section for every issue.

What’s your opinion on the worth of negative reviews?
I’m a proponent of rigorous reviews—if a reviewer engages with a book’s ideas and writing in good faith and finds it lacking somehow, then it is what it is. But I don’t think pans really have any value, especially if they’re just going after easy targets. You can’t learn anything from a pan, so I don’t write them, and I don’t like editing them.

Have you ever changed your mind about a book that you praised or panned earlier? Has a work of criticism ever changed your opinion of a writer’s work?I’ve changed my mind about several books I’ve reviewed. I’m an obsessive rereader, and every time I read a book it feels like a new thing. So sometimes I go back to something and understand something differently when I have more time to consider it. And other critics’ work makes me rethink my own positions all the time. I feel like a review, aside from being an engagement with a book, is also a snapshot of where my mind was at a particular time—what I was obsessing over, what moods I was swimming in while reading and writing, whatever time constraints I was working under. It’s not a static evaluation.

Has social media been helpful in your role as a critic and an editor?
Social media makes me anxious, so I don’t really use it aside from looking for good essays and memes. It has kind of receded from my life as a professional tool.

Is there anything about the book-reviewing ecosystem—whether on the publishing side or the media side—that you wish would change?
I mean, I’ve kind of implemented this via my role at the Believer, but I chafe at the fact that book reviews are so often tied to publicity for the books in question. I like the late-arriving review essay, the piece that takes it slow and sets the book down within a broader literary patchwork. Those reviews take time to write and shouldn’t be pegged to publicity.

Where do you see the future of literary criticism and books coverage in ten years?
It’s hard to imagine where anything will be ten years from now. I’m most interested to see where the current moment takes us in terms of what kinds of people are given opportunities to be editors. In a world where media and publishing heed the lessons of the last few months, will there be an influx of POC editors into magazines and newspapers? How will that change what gets covered? I’m an optimist—I think we’ll see substantial change in that regard.

Of those publications that still devote space to literary criticism, which are your favorites?
The Los Angeles Review of Books, Bookforum, the New Yorker, Public Books.

What books that you aren’t reviewing are you most looking forward to reading?
The Vanishing Half by Brit Bennett, Include Me Out by Marıa Cristoff, Minor Feelings by Cathy Park Hong, A House Is a Body by Shruti Swamy, Transcendent Kingdom by Yaa Gyasi, and How Much of These Hills Is Gold by C Pam Zhang.