This week’s installment of Ten Questions features Namwali Serpell, whose novel The Old Drift is out today from Hogarth. Blending historical fiction, fairy-tale fables, romance, and science fiction, The Old Drift tells a sweeping tale of Zambia, a small African country, as it comes into being, following the trials and tribulations of its people, whose stories are told by a mysterious swarm-like chorus that calls itself man’s greatest nemesis. In the words of Chinelo Okparanta, it is a “dazzling genre-bender of a novel, an astonishingly historical and futuristic feat.” Namwali Serpell teaches at the University of California in Berkeley. She won the 2015 Caine Prize for African Writing for her story “The Sack.” She received a Rona Jaffe Foundation Writers’ Award for women writers in 2011 and was selected for the Africa39, a 2014 Hay Festival project to indentify the best African writers under the age of forty. Her fiction and nonfiction has appeared in the New Yorker, McSweeney’s, the Believer, Tin House, Triple Canopy, Callaloo, n+1, Cabinet, the San Francisco Chronicle, the Guardian, and the New York Review of Books. 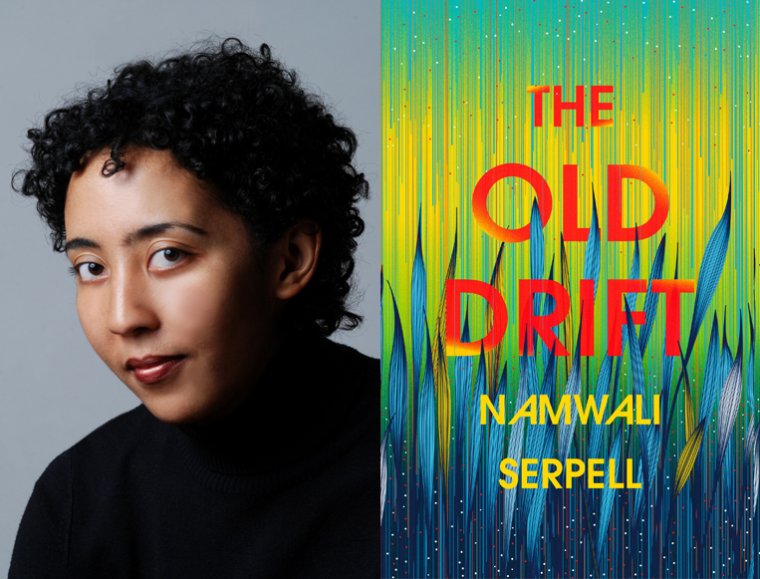 1. How long did it take you to write The Old Drift?
I’ve been writing it off and on since the year 2000. I worked on it in between getting my PhD; publishing my first work of literary criticism, a dozen stories, and a few essays and reviews; getting tenure; and writing a novel that went in a drawer. I concentrated exclusively on The Old Drift after I sold it based on a partial manuscript—about a third—in 2015. I finished in 2017.

2. What was the most challenging thing about writing the book?
Fact-checking. The novel is rife with speculative fiction—fairy tale, magical realism, science fiction—but I was anxious to get historical, scientific, and cultural details right, that the notes didn’t sound off. Because the novel is so sprawling, it was hard to verify everything. I’m grateful for my informants—family, friends, acquaintances, strangers, and the blessed internet.

3. Where, when, and how often do you write?
I’m too nomadic, or “movious” as we say in Zambia, to limit myself to a particular desk in a specific nook with a certain slant of light. I write from late morning to late afternoon, when most people are hungry or sleepy—I seem to find both states conducive to “flow,” as they call it. My writing frequency varies by genre. I can write nonfiction or scholarly prose for about five hours at a time, and as many days in a row as needed. I can write fiction for about three hours at a time, and it improves distinctly if I write every other day. My best work, regardless of genre, often happens in one big burst—an eight hour stretch, say, like a fugue. But I can’t prime my schedule or prepare myself for those eruptions. They come as they wish. I am left spent and grateful.

4. What was the most unexpected thing about the publication process?
The chasm between writing the book and marketing the book. It’s a rift in one’s psychology but also in logistics (who does what), and most shockingly, in value. There is simply no calculable relation between these two value systems: the literary and the financial, the good and the goods.

5. What are you reading right now?
Maurice Carlos Ruffin’s We Cast a Shadow. I’m excited because it draws on a longstanding preoccupation of mine: the recurrent fantasy of racial transformation in sci-fi.

7. What is one thing you’d change about the literary community and/or the publishing business?
Blurbs. They tap into our most craven, gratuitous, and back-patting tendencies. End them.

8. What is the biggest impediment to your writing life?
The problem of money, of course.

9. What trait do you most value in an editor (or agent)?
Being able to recognize how things will best coincide—opportunities, ideas, words, people—and not forcing them, but setting up the space for them to do so. It goes by various names: “finger on the pulse,” “a sense of the zeitgest,” “savvy.” I think of it as a feel for kismet.

10. What’s the best piece of writing advice you’ve ever heard?
Amitav Ghosh once visited a graduate course I was taking. And he said of a writer (who shall remain nameless): “If everything is a jewel, nothing shines.”

“It’d be nice if the American literary community’s obsession with signal-boosting the optics of diversity were solidified into a tangible, fiscally remunerative reality for minority writers.” —Bryan Washington

“A good portion of Gingerbread was written sitting on the floor, in a chair with no legs but excellent back support.” —Helen Oyeyemi, author of Gingerbread

“I’d love the community of contemporary writers to read each other with the freedom and rigor (vigor) we bring to hearing the music we love the most.” —Ed Pavlić