The Southern Gothic tradition is subverted and at play in Leigh Camacho Rourks’s Moon Trees and Other Orphans (Black Lawrence Press, October), a debut story collection that portrays a Louisiana that is both bayou and fast food joint, abandoned substation and New Orleans college campus. The stories feature characters trapped in tough circumstances with people they can’t seem to escape: a woman running a snake oil operation with her careless husband, a man who discovers his old parole officer dead in a river, a recent divorcé stuck with his ex-wife’s box of mail-order breast implants. Rourks’s images are striking, so it is no wonder the literary magazines she is drawn to also feature writing rich in visual description. In addition to the journals below, Rourks has published stories in the Kenyon Review online and the Greensboro Review. 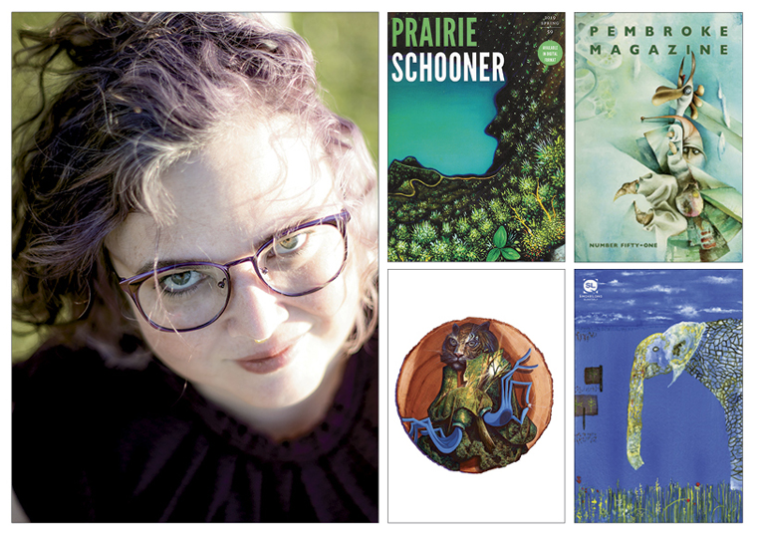 The title story of Rourks’s collection, about a teen struggling to care for her ten-year-old brother and her paranoid schizophrenic mother, won the 2014 Glenna Luschei Award administered by the print quarterly Prairie Schooner. Rourks admires the publication, which is edited by poet Kwame Dawes at the University of Nebraska, for its poetic language, sense of place, and cohesion. “Prairie Schooner always feels so tight that the works seem to speak to each other, to play off of each other,” she says. “I can’t think of many other journals where each issue feels so very completely hung together, almost like a book.” Submissions in poetry, fiction, and nonfiction are open via postal mail or Submittable until May 1.

“Have you seen the covers of Pembroke Magazine?” Rourks asks. “They are gorgeous. It is a beautiful journal I wish more people knew about.” Established in 1969, the print annual publishes poetry, fiction, and nonfiction. Edited at the University of North Carolina in Pembroke, the magazine showcases many North Carolinian writers and other Southern writers, though Rourks notes it is not a regionalist journal. “It’s publishing authors from all over,” she says. “But it has been one of the journals at the forefront of redefining what Southern writing is, widening the net and embracing rural grit lit and what poet J. Bruce Fuller—also published in Pembroke—calls eco-gothic lit.” Poet Doug Ramspeck, fiction writer Nina de Gramont, and nonfiction writer Jess E. Jelsma contributed to the most recent issue. Submissions in all genres are open through April 30 via Submittable.

The dark tone and images of Rourks’s story “The Revival”—about a woman running a religious scam—fit right in at PANK, a journal of poetry, fiction, and nonfiction that “doesn’t shy away from the dark or the weird or the hard,” says Rourks. Established in 2006 by M. Bartley Seigel and Roxane Gay, the journal is now published twice a year online and once a year in print and edited by Chris Campanioni, Jessica Fischoff, and Maya Marshall. Campanioni recently launched a series of themed folios of poetry, fiction, and nonfiction that appear online on a quarterly basis; the folios have thus far tackled health and healing and highlighted Latinx/Latinidad stories. The editors accept submissions year-round for the journal and folios via Submittable.

Rourks was drawn to TriQuarterly for its engagement with an audience “inside and outside of literary academia.” Housed at Northwestern University, the biannual journal is edited by current and former creative writing graduate students, who seek poetry, fiction, creative nonfiction, short drama, and hybrid work that, as they write on their website, “embraces the world and continues, however subtly, the ongoing global conversation about culture and society that TriQuarterly pursued from its beginning in 1964.” Throughout its history, the journal has adapted to changes in publishing; Rourks praises the editors for embracing digital formats back when “everyone in academia was arguing over whether it was ‘real’ publishing.” Each issue, for example, features video essays, such as Amanda Stewart’s “Kitsch Postcards,” which pairs postcards of Australia alongside an original poem. Submissions in poetry, fiction, and creative nonfiction are open through December via Submittable; writers can submit video essays, craft essays, and interviews year-round.

Titled after a Chinese nickname for flash fiction, which comes from the observation that reading a piece of flash fiction takes as long as it does to smoke a cigarette, SmokeLong Quarterly publishes about twenty smokes’ worth of flash fiction four times a year online. Rourks reads the journal on her lunch hour and enjoys how “there are narrative risks around every corner, unexpected turns, powerful language, experiment, and tradition side by side—everything that keeps reading exciting.” The journal also publishes a weekly piece of flash and Smoke & Mirrors, a series of micro-interviews with every contributor. Submissions of flash fiction—the journal does not publish poetry or nonfiction—are open year-round; contributors are paid $50 per story.

The poet discusses the journals that published pieces from her sixth collection, Nightshade.

The essayist on the journals that published essays from her debut collection, When You Learn the Alphabet.