Hey mi gente, I want to jump right in and continue with the interviews I’ve been able to hold with local Houston writers about life during the pandemic. For this series, I reached out to writers and posed one simple question:

This series began with insights from Katie Hoerth and Daniel Peña, and this week, I bring you poet Melissa Studdard. Studdard is the author of five books and the recipient of the 2019 Penn Review Poetry Prize and the 2019 Tom Howard/Margaret Reid Poetry Contest sponsored by Winning Writers. Her works include the poetry collection, I Ate the Cosmos for Breakfast (Saint Julian Press, 2014), and the poetry chapbook, Like a Bird With a Thousand Wings (Saint Julian Press, 2020). Her writing has been published in the New York Times, POETRY, Kenyon Review, and the Guardian.

Here is what Melissa had to say:

“Like so many others, I’ve spent a lot of time trying to get my head around what’s happening. Kelli Russell Agodon and I have been coauthoring poems five days a week that grapple with this new life we’re living and how suddenly it was thrust upon us. As well, I pen a daily poem for the Grind. Outside of writing, I’ve been cooking, gardening, spending a lot of time with my kid, and reading. In some ways, it feels like everything has changed, and in others, it feels like nothing has changed. I still do a lot of the same things, but differently. Whereas before I was a little more solitary and introspective, now I seek connection in everything. When I read, I read to understand, as deeply as possible, other humans. When I garden, I want to know the tomato, feel the basil, be the soil. The pandemic has forced me to slow down and see things I looked past before. Everything feels so fragile now; I want to take great care with it all. I don’t want to take anything for granted.

I have also been collaborating with a composer friend, Christopher Theofanidis, with whom I recently released a chapbook of my poems and fragments of his musical scores called Like a Bird With a Thousand Wings. The musical scores are from his composition “The Conference of the Birds,” which is based on Attar’s allegorical poem by the same title. All the release performances and activities were cancelled, so we’ve been doing limited virtual events instead, and we’ve begun work on an oratorio based on Hesse’s Siddhartha. In addition to my own writing, I’ve been trying to support other writers. Among other small gestures, I’ve held some monthly drawings on Twitter to give writers money for contest entry fees. I had the good luck of winning several contests recently, and I was thinking about how there are a lot of writers who should be placing in and winning contests but can’t afford to participate. I wanted to spend some of my winnings to help them enter contests because I think it’s important right now to find ways to make and give joy, and to create things for ourselves and others to look forward to.” 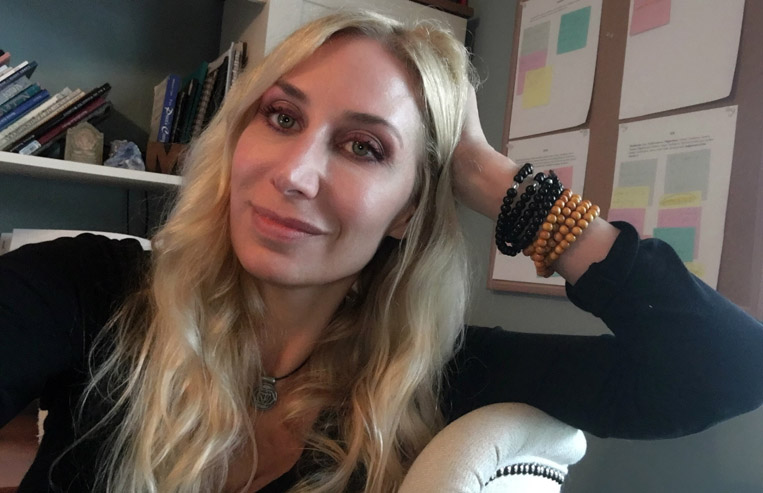 Photo: Melissa Studdard.
Lupe Mendez is the literary outreach coordinator for Poets & Writers in Houston. Contact him at Houston@pw.org or on Twitter, @houstonpworg.