Hey mi gente, I hope that you are well and reaching all your goals or if you have stumbled along the way, I wish you the strength to get back up. My last blog post was the last interview for the COVID Vivid series, in which I asked Houston writers what they’ve been doing since the pandemic started. I want to send a major thank you to everyone that participated in the series and shared their very personal experiences. I hope everybody who reads this blog has been able to benefit from these entries.

I will be switching gears as my time as literary outreach coordinator draws to a close. I’ll be focusing these last few posts highlighting all the ways that the literary experience in Houston points to the future. There are so many brilliant opportunities happening it’s hard to count. Each of these last posts will focus in on one or two (or three) things happening in the city.

While discussing the need to highlight major happenings in poetry during the month of April with Readings & Workshops program coordinator Ricardo Hernandez, I was reminded about what makes Houston such a brilliant place. I mentioned that I wondered why the Houston Poetry Fest happens in October when National Poetry Month is in April, and of course it should have made sense to me already—the Houston Poetry Fest predates National Poetry Month by a decade.

Established in 1985, the festival is held at our University of Houston-Downtown campus and is free and open to the public. There are readings and panels, and off-site events throughout the city to attend. Sadly, the festival had to be canceled last year due to the pandemic, but we hope to celebrate this October, which would mark the annual event’s thirty-sixth anniversary.

Continuing this celebratory vibe, I’d like to send congrats to Adriana Salazar who received a United States of Writing Project Grant from Poets & Writers for her upcoming workshop series. Salazar’s “Examining Oneself Through Self Portraits” will look at the building blocks of identity, examining the self both as a collective and as individuals using self-portraits to create new works. The three-part virtual workshop series will be in collaboration with fellow grantee Omer Ahmed and starts in May so keep an eye out in the Literary Events Calendar for more details.

Last but not least, major shout-out to the fifth and newest Houston poet laureate, Emanuelee “Outspoken” Bean! Bean’s two-year term began this month and runs through April 2023. As poet laureate, he will work closely with the Houston Public Library and the Mayor’s Office of Cultural Affairs to implement his community outreach project “Space City Mixtape,” an album of twenty-track spoken word and creative audio experiences by Houstonians. He will also conduct eight workshops in Houston’s public libraries, and create videos and poems to share on social media. Looking forward to seeing his work and events in the city.

Lupe Mendez is the literary outreach coordinator for Poets & Writers in Houston. Contact him at Houston@pw.org or on Twitter, @houstonpworg.
United States of Writing
Detroit

I am excited to share my thoughts after reading Christiana Castillo’s poetry chapbook, Crushed Marigold, illustrated by and Karla Rosas and published by Flower Press, a Detroit-based publishing practice centering womxn, femme, queer, and trans artists. Castillo is a Latina/Chicana poet, teaching artist, and gardener born in Rio de Janeiro, Brasil and living in the Detroit area. She is the recipient of fellowships from Room Project, Voices of Our Nation (VONA), and Disquiet International.

Castillo joined the Writing in Detroit virtual reading last October, sponsored by Poets & Writers, which offered an inspiring insight to her writing style and bright imagery. Crushed Marigold further expounds upon her writing with colors and textures juxtaposed against the theme of brown skin. In addition, the warm illustrations by artist Karla Rosas throughout the book leave the reader wondering what world we will be pulled into next with each poem.

A favorite poem of mine from Castillo’s collection is “Questions for the Moon,” which asks: “Does the Moon practice self care? / Does she have the time? / I know she controls the / tides / and the water within / us all / but / can she control herself?” The poem gently personifies the moon in a way that opens the reader’s mind to consider how the world around us not only responds to us, but how it responds to itself. The entire collection made me reconsider how we interact with the everyday aspects of our own cultures.

This collection also leaves me with a feeling of hope and perseverance with couplets like “in the midst of decay / there are always more seeds sprouting.” While Castillo touches on heavier topics such as colonization, there is always a sense of moving forward, of growth, of survival.

Crushed Marigold is available at Flower Press’s website and a percentage of the proceeds goes to American Indian Health and Family Services in Michigan, and Kooyrigs, an organization that provides resources to Armenian communities worldwide. 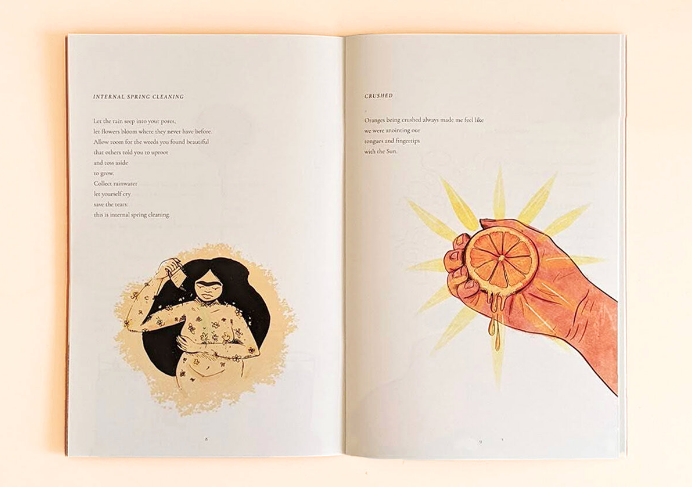 Photo: An open page of Crushed Marigold by Christiana Castillo, illustrated by Karla Rosas.
Justin Rogers is the literary outreach coordinator for Poets & Writers in Detroit. Contact him at Detroit@pw.org or on Twitter, @Detroitpworg.
United States of Writing
New Orleans

On April 1, poets from the anthology I Am New Orleans, published last September by the University of New Orleans Press, kicked off the 2021 New Orleans Poetry Festival with a reading. Edited by Kalamu ya Salaam, the anthology includes thirty-six poets who revisit and celebrate Marcus B. Christian’s definitive poem of the same name.

The event was broadcast live from Café Istanbul, a popular event space in the city for music and poetry, and poets beamed in from their homes to share their work. There was a limited in-person audience and many watching virtually. For a lot of writers who hadn’t seen each other since before the pandemic, the reading served as a virtual reunion. There were shout-outs and “hey, how you doing?” messages filling up the chat.

The reading featured editor Kalamu ya Salaam along with poets Kristina Kay Robinson, Akilah Toney, Michael “Quess” Moore, Skye Jackson, Jahi Salaam, Chuck Perkins, and Frederick “Hollywood” Delahoussaye. I was also honored to take part as a reader and enjoyed this celebratory event, a launch to both the festival and to National Poetry Month.

Watch the I Am New Orleans reading here:

Kelly Harris is the literary outreach coordinator for Poets & Writers in New Orleans. Contact her at NOLA@pw.org or on Twitter, @NOLApworg.
United States of Writing
Houston

Happy April and National Poetry Month! This week, I conclude my series of interviews with Houston writers speaking about their experience during the COVID-19 pandemic, each answering the question:

Here is what she had to say:

“When the pandemic started last year—I guess this happened to all of us—I was in shock. At that time, I felt like something, or someone, was stealing a part of my life away from me. There are a few days, here and there, that I still have that sense of grief and loss. I remember one day though, just as I was touching bottom on my feelings regarding the lockdown, an idea came to me: I needed to make up for all the time lost in this pandemic by putting together a book. That would be the only way I could survive this time without losing my mind. The mere idea of waking up to a project that I set for myself made all the difference. That book is finished and, in spite of the fact that I still need to go through it and make sure all looks good, at least I can say that I kept my cool thanks to it.”

Lupe Mendez is the literary outreach coordinator for Poets & Writers in Houston. Contact him at Houston@pw.org or on Twitter, @houstonpworg.