A Revolution in Listening

In 1952 in New York City, Barbara Holdridge and Marianne Roney recorded Dylan Thomas reciting a few of his poems, including the famous villanelle “Do not go gentle into that good night.” Released on vinyl later that year, the recording offered a rare chance to hear Thomas, who worked for years as a radio broadcaster, read the poem and its memorable last refrain, “Rage, rage against the dying of the light.” It also marked the launch of Caedmon Records, a label dedicated to restoring the spoken tradition of poetry and stories and creating, as its slogan read, “a third dimension for the printed page.” Caedmon Records became Caedmon Audio when it was acquired by HarperCollins in 1987 and made the switch from vinyl to CDs. To this day, the label is still often credited as having laid the foundation for the audiobook industry. 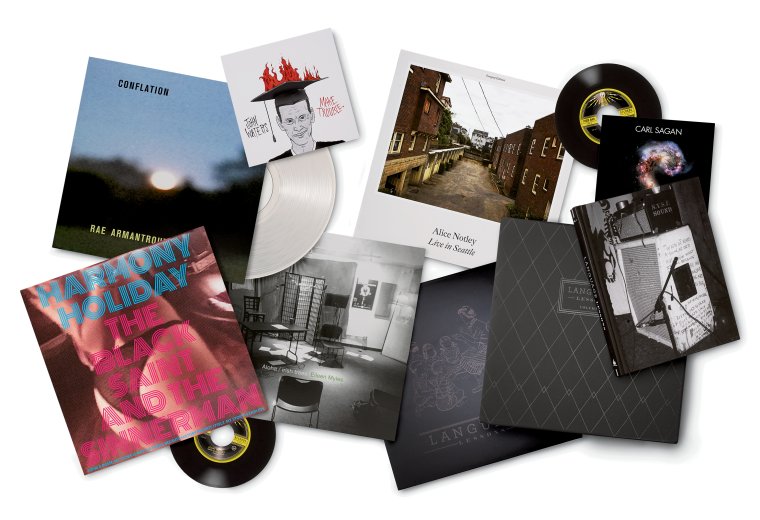 Caedmon’s vinyl recordings seemed to be a thing of the past until January, when HarperAudio/Caedmon announced a new series of literary vinyl, to be released throughout 2018. The imprint’s first title, a recording of actor Nate Corddry reading Joe Hill’s story “Dark Carousel,” came out in April, and records by Nikki Giovanni, Neil Gaiman, and Daniel Handler (also known as Lemony Snicket) will be released later this year.

HarperCollins isn’t the only big publisher to venture into vinyl. In February Hachette Audio launched a new vinyl audiobook series with its first title, David Foster Wallace’s This Is Water. Later this year the imprint will release recordings by David Sedaris, Lin-Manuel Miranda, and Amanda Palmer, among others. Both HarperCollins and Hachette are looking to capitalize on the unexpected revival of vinyl in recent years, despite the format’s near-demise in the 1980s with the introduction of CDs. According to the Recording Industry Association of America, revenues from vinyl were as high in 2015 as they were in 1988. Jeff Bowers of Wax, the independent record label partnering with both Hachette Audio and Harper Audio, said in a January press release, “This well-curated, thoughtful series of spoken-word releases is a response to the tremendous growth in audiobooks and vinyl, part of a new moment in what has become a listening revolution.”

In the foreground of this revolution are Third Man Books and Fonograf Editions, independent literary presses committed to recording language on vinyl. Even as music streaming dominates as a listening format, Third Man Books and Fonograf Editions aim for a literary listening experience that is both meaningful and tangible, that necessitates the physicality and fuller sound of a vinyl record. “People were saying fifteen, twenty years ago that records were going to go away,” says Chet Weise, cofounder of Third Man Books. “People said paper books were going to go away too. The craze is settling down, and paper books are still a majority of what people read. There is something to [their] tangibility. It isn’t just rationalizing that these things we love are worth something and should stay around.”

Third Man Books is the partner publisher of Third Man Records, launched in 2001 by multi-Grammy-winning musician Jack White in Detroit. In 2014 Third Man Records claimed the best-selling vinyl album since Pearl Jam’s Vitalogy in 1994 with White’s Lazaretto. The label also boasts “the world’s only live venue with direct-to-acetate recording capabilities” in Nashville, where writers as well as musicians can record their work straight to vinyl. “For me, poetry has to exist in the audio spectrum—got to hear those words with some breath behind them,” says Weise. “It’s music, and if we believe that music sounds best on vinyl and is best presented on vinyl, we’re going to put poetry on vinyl too.”

Third Man Books released its inaugural title, Language Lessons: Volume 1, in 2014, a box set that includes an anthology of contemporary poetry and prose by writers and musicians such as C. D. Wright, Adrian Matejka, Richard Hell, and Tav Falco, plus two vinyl LPs of jazz, psychedelic punk, poetry, blues, and pop, and five poetry broadsides. Since then Third Man Books has maintained a multimedia aesthetic; its April release, Destruction of Man, a book-length poem about farming by Abraham Smith, includes photography and an audio flexi disc of Smith reading his own poetry.

Jeff Alessandrelli, the director of Fonograf Editions, shares Weise’s reverence for literary vinyl. “It allows for a listening experience that is also an emotional experience,” he says. “When I listen to an MP3, I don’t get the same emotional sensation that I get when I listen to a record.”

Fonograf Editions, an imprint of Portland, Oregon–based independent publisher Octopus Books, was established in 2016. Since then the vinyl-only poetry press has quickly garnered national attention by releasing records featuring readings by Rae Armantrout, Eileen Myles, and Alice Notley, who performed her work live in Seattle. Fonograf’s latest record, Harmony Holiday’s The Black Saint and the Sinnerman, released in March, features poetry by Holiday along with music sampled from Charles Mingus’s 1963 album, The Black Saint and the Sinner Lady.

“We live in a digital age, and I think in a lot of ways that’s great; it streamlines a lot of experiences,” says Alessandrelli. “But I think increasingly there’s going to be both the desire and a need for things that are tactile and for things that you can hold on to, and that means something greater than an MP3.” For more and more readers, listeners, record labels, and publishers, that something can be found with a needle traversing the grooves on a vinyl record.

Thea Prieto writes and edits for Portland Review, Propeller Magazine, the Gravity of the Thing, and Oregon Music News. Her website is theaprieto.com.

In celebration of  Short Story Month, we’ve assembled ten of our favorite audio recordings of authors reading from story collections featured in Page One: Where New and Noteworthy Books Begin during the past five years.

Page One: Where New and Noteworthy Books Begin
by Staff | News and Trends 4.11.18

The first lines of a dozen new books, including The Dream of Reason by Jenny George.

The Endangered Poetry Project
by Maggie Millner | News and Trends 2.14.18

A London-based initiative works to collect and archive poems in endangered languages.