A New Home for Hugo House

The Seattle literary arts organization Hugo House once made its home in a ramshackle two-story building with peeling paint outside and a yellow bucket to catch leaking rainwater inside. But with a growing number of visitors each year, the house could no longer comfortably support all the nonprofit’s programs. “We loved the old house, but we couldn’t fix it,” says Linda Breneman, who founded Hugo House with Andrea Lewis and Frances McCue in the late nineties. “It didn’t quite have the infrastructure we needed for more classrooms, a nicer space for literary events, better space for employees, and ADA accessibility.” 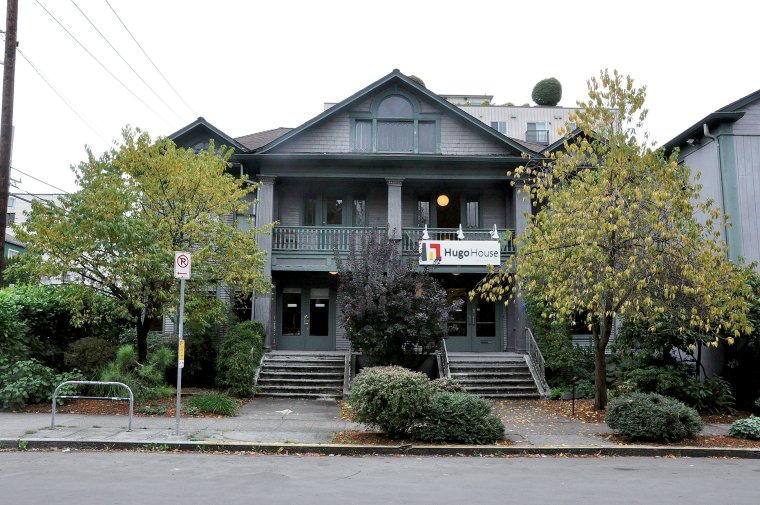 In August a shiny new $7.1 million Hugo House will open at the site of its original home. Located in one of Seattle’s first arts districts, on Eleventh Avenue across from a busy city park, Hugo House’s ten-thousand-square-foot space will appropriately serve more than ten thousand Seattle-area writers and readers annually. The larger building will allow the nonprofit to expand its offerings of classes, workshops, one-on-one consultations, readings, and book signings, providing a bigger, better hub for the Seattle writing community. “It’s a place for writers to gather,” says Tree Swenson, the nonprofit’s executive director.

Hugo House is named after Richard Hugo, who grew up in a poor Seattle neighborhood and eventually became a successful poet and beloved writing teacher. “The new building is a great way to honor the poet, whose art lifted him far beyond his underprivileged origins,” says Swenson, who knew Hugo personally. The space, on which builders broke ground in May 2016, will feature a light-flooded entryway with expansive windows, leading to a publicly accessible “salon.” The building will include six classrooms (up from the original four) and a 1,527-square-foot, 150-seat theater for readings and events, to be hosted in partnership with other organizations in Seattle.

The design of the new and improved Hugo House reflects the organization’s commitment to inspiring writers. “The imagination is summoned the minute you come in,” Swenson says. “NBBJ, a major international architectural firm, really listened and came up with a design that reflects the quirkiness of the writerly soul.” (The firm boasts clients such as Google, Microsoft, Cambridge University, and Stanford University, along with hospitals, courthouses, and libraries across the United States and abroad.) A team of designers from the firm met with Hugo House staff to form a planning committee, whose goal was to visualize a functional interior, tailored to enhance creativity. “We focused on how you create these environments that are eccentric and eclectic,” says NBBJ architect and partner Ryan Mullenix.

The interior of the building will be full of surprises and unconventional design elements. Each classroom will be constructed of different materials, including wood plank, cork, and frosted glass, with dry-erase walls for impromptu class notes. The house will also feature “staircases to nowhere” and benches that double as bookcases. A “pencil wall” in one classroom will hold hundreds of pencils. Curated quotes from Richard Hugo will be hidden around the building: near electrical outlets, at the edge of a restroom mirror, or in peekaboo windows. “You might find a quote on the ceiling,” Mullenix says, “and it will hopefully encourage people to come back.”

Initial planning for the space began in 2012, and in 2015 staff embarked on an effort to raise the necessary millions for estimated project costs. Benefactors, grants, and enthusiastic supporters provided $6.35 million. This spring Washington State gave more than $1 million in the form of a Building for the Arts grant. A community-wide campaign is currently raising funds for the remaining costs.

Staff members consider the new building’s early success an encouraging counter-narrative to the ways in which arts and nonprofit organizations are often evicted from their buildings, especially in city centers, thanks to rapid development and booming real estate prices. “Cultural spaces are being pushed out,” Swenson says. “As in any rapidly gentrifying city, we wonder, ‘What if other developers had this idea, to integrate an arts or cultural spot in new buildings, to keep the soul of a city alive?’”

The United Nations Educational, Scientific and Cultural Organization officially designated Seattle a “City of Literature” in October. Since its founding, Hugo House has played a significant role in building that literary culture in the Emerald City. “Every city needs to have a place open to all writers, wherever they are in their journey,” Swenson says. “If you love books, reading, writing, and words, the literary community is so welcoming, and people will guide you. Writers helping writers.”

Lora Shinn is a freelance writer and recovering librarian, whose literature-related work has appeared in the Los Angeles Review of Books, Kirkus Reviews, and Voice of Youth Advocates, among other publications.