In March of last year Pat Conroy, the best-selling South Carolina author of such lyrical, semiautobiographical Southern epics as The Prince of Tides and The Great Santini, died of pancreatic cancer. In the weeks after, his closest friends established a nonprofit writers center and museum to pay tribute to the author’s legacy. Officially launched in February, the Pat Conroy Literary Center offers a growing roster of workshops, readings, lectures, book clubs, and special events to nourish a vibrant creative community in Conroy’s adoptive hometown of Beaufort, South Carolina. “We want the center to be a haven for writers and readers, a nexus point in Southern literary life,” says Jonathan Haupt, the center’s executive director. 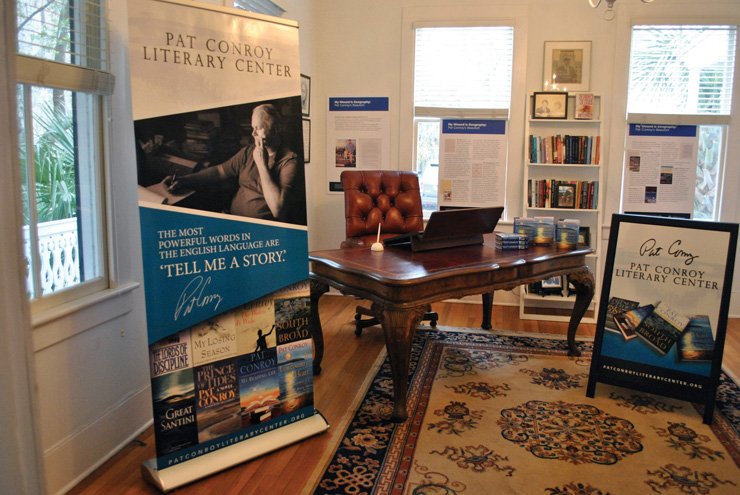 The idea for the center started with Marly Rusoff, Conroy’s friend of forty years and his agent for the past decade. At Conroy’s funeral, someone suggested erecting a statue in Beaufort; the idea was quickly dismissed. “My reaction was, ‘My God, Pat would hate that,’” Rusoff recalls. “What you need is a writing center, helping people the way he wanted to be helped when he was a young writer.” Conroy self-published his first book, The Boo, in 1970, and when Houghton Mifflin offered him $7,500 for his memoir The Water Is Wide, he naively replied that he couldn’t possibly raise that much money to print the book. Once he established himself in the publishing industry, Conroy dedicated himself to launching the careers of talented writers, offering advice, encouragement, and critique—not to mention effusive blurbs. Rusoff sees the center as an extension of this lifelong pursuit.

Rusoff herself has experience in building such organizations: In the seventies, her Minneapolis bookstore became the site of the Loft, now one of the nation’s largest nonprofit literary centers. For the Pat Conroy center’s headquarters, Rusoff and her partner, Mihai Radulescu, rented a house in downtown Beaufort, owned by the mayor and his brother. The house is not unlike the one described in The Great Santini—a columned antebellum Charleston-style affair, rocking chairs on the porch and all—and it’s within walking distance of Tidalholm, the mansion used in the film. The center held a soft opening in October with a rotating exhibition of Conroy materials, including his writing desk, his father’s flight jacket, and the handwritten opening pages of The Prince of Tides.

Haupt and the board, chaired by Jane T. Upshaw, the distinguished chancellor emerita of the University of South Carolina in Beaufort, have organized the center’s programming around Conroy’s two central lessons for writers. “He believed that the best thing for being a better writer is to be a better reader,” Haupt says. “We want to honor that with an elaborate book-club model to help people read more intensely, more deeply, and with greater empathy. To writers, he said to go deeper. When you think you’re there, you’re not even close.”

The center will sponsor numerous special events in Beaufort and Charleston. The Watering Hole, a group of Southern poets of color, will be teaching workshops in August at the Penn Center on nearby St. Helena Island, where Conroy is buried and where he first heard Martin Luther King Jr. speak. A series called “Evenings of Story and Song,” also planned for this year, will blend literature and live music. And the center will offer guided tours of Beaufort and Charleston, the two places most steeped in Conroy lore. Haupt also plans to extend the center’s reach by sponsoring book festivals and other events throughout the South.

The center’s signature event is the annual Pat Conroy Literary Festival, which will be held October 20 to October 22 in Beaufort and features readings, performances, panels, screenings, and workshops. Haupt created the festival in 2015 as a seventieth birthday celebration for Conroy, who attended nearly all the sessions. In 2016, the second annual event was held in his memory. “That first festival was such a gift to us,” Haupt says. “No one knew, not even Pat, that he was sick.”

Those who can’t make it to Beaufort can read and contribute to Porch Talk, the center’s new blog, which is hosted by writer Janis Owens and features essays on craft and publishing. “It’s not a shrine to Pat,” Haupt says of the blog. “We’d love writers at all levels of their career to participate, to make writing and publishing a little less mysterious.”

For novelist Cassandra King, Conroy’s widow and the center’s honorary chair, the new institution honors his memory perfectly. Conroy was a voracious reader and rapt listener, King says, generous to a fault. “I’m thrilled that we’re able to keep his spirit going in this way,” she says. “I just know he would be proud.”

Jonathan Vatner is a fiction writer in Brooklyn, New York. He is the staff writer for Hue, the magazine of the Fashion Institute of Technology.