What do Tupac Shakur’s “Dear Mama,” Julia Child’s Mastering the Art of French Cooking, Jack Kerouac’s 120-foot scroll upon which he famously penned On the Road, and Martin Luther King Jr.’s “Letter from Birmingham Jail” all have in common? They are on display, side by side, at the American Writers Museum (AWM) in downtown Chicago, which officially opened its doors to the public in May. 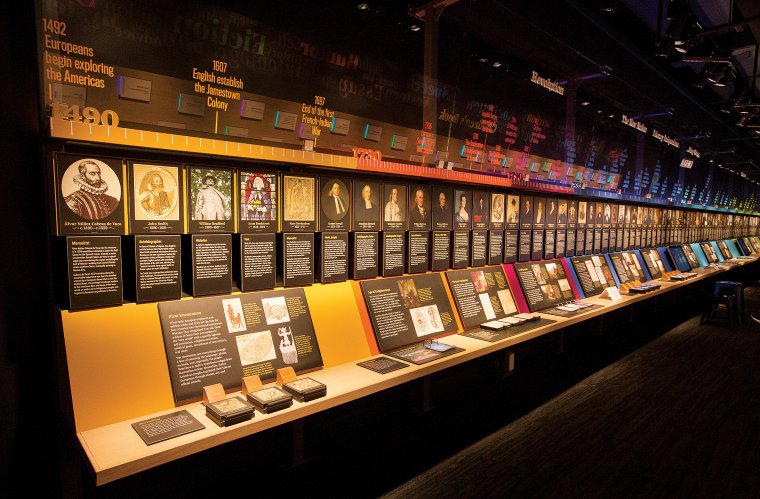 A museum focused solely on the nation’s writers and writing, the AWM is the first of its kind in the United States. Founder Malcolm O’Hagan, an Irish engineer and scientist who lives in Washington, D.C., was inspired by the Dublin Writers Museum, which opened in 1991. “I love literature, in particular poetry, and just love spending my time with Irish writers there,” O’Hagan says. “When I looked into visiting an American version, I was shocked to learn none existed. So I decided to start one myself.”

Eight years later, after nearly $10 million in private funds was raised and “months upon months” were spent debating the museum’s design and focus, the AWM was born. Housed a block from Millennium Park, on Chicago’s “cultural mile”—so called for its many museums, colleges, and theaters—the nearly 11,000-square-foot museum displays everything from Walt Whitman’s verse to Octavia Butler’s reflections on writing to Timex’s famous slogan, “It takes a licking and keeps on ticking.” The variety is no accident. Rather than hire a single expert of American letters, the AWM formed a committee of writers, scholars, critics, and arts administrators from around the country to determine what the museum should celebrate.

“When we set out to define ‘American writing,’ we realized we didn’t want to just house literature,” says O’Hagan. “We also weren’t interested in the idea of the ‘best’ writing or in sealing the museum off for academics or quote-unquote ‘readers.’” Instead, the museum aims for a broader reach, focusing on how American writers and writing have shaped the country’s identity and culture and continue to inform everyday lives. “Our mission, like perhaps all important writing, is to include, not exclude. So we focused more on the extraordinary history of American writing, the array of types and backgrounds of people who have contributed to it, and the story of America our writing collectively tells.”

To create this inclusive space, O’Hagan and his team of developers hired Amaze Design, a firm known for creating visually striking, interactive learning spaces such as the American Jazz Museum in Kansas City, Missouri, and the Birmingham Civil Rights Institute in Alabama. The final product is a vibrant, inspiring space that allows museumgoers to interact with the writers of America’s past and present and get inspired to write themselves. In “Mind of a Writer,” patrons can bang away like Hemingway at a bank of old typewriters and hang their masterpieces on the “Story of the Day” wall for others to enjoy. The “Word Play” exhibit houses a variety of word games on a virtual tabletop, encouraging visitors to write and share original poems. “This isn’t a library,” says O’Hagan. “It’s not a place where you want to go sit down and read. It’s a three-dimensional space where you interact with what you find, not just look at it and move on.”

In addition to the interactive portions of the museum, several exhibits focus on the history and range of American writing. A mural depicting a tree full of squirrels reading famous children’s books fills an entire wall of the “Children’s Literature Gallery.” The exhibit in the main hall, “American Voices,” celebrates a hundred emblematic American writers below a sixty-foot timeline of American history, starting with the exploration of the Americas by Europeans in 1492 and ending in the present day. On an opposite wall, a “Surprise Bookshelf” encourages visitors to explore less literary writing, such as cookbooks, sports writing, journalism, and song lyrics.

So far, the museum has been a success. Chicago mayor Rahm Emanuel, Cook County board president Toni Preckwinkle, authors Stuart Dybek and David McCullough, and other writers, booksellers, and community members attended the ribbon-cutting ceremony in May, and the museum is already on track to reach its goal of 120,000 visitors annually. The museum also offers regular events and resources, such as readings, workshops, author discussions, and storytelling hours, and the staff hopes to expand the museum’s programming by partnering with writing organizations across the country.

The museum’s opening comes at a tenuous time for the arts in America, with funding for the National Endowment for the Arts and the National Endowment for the Humanities being threatened. But its early success is a reminder of the public’s interest in American writers and writing, and the AWM seems poised to affirm and protect the value of American literature for years to come. “It will be an enormous resource,” Dybek said at the museum’s opening ceremony. “And hopefully it will spread through the United States this notion that you can have this kind of local, cultural institution—something that passes on the culture.”

Andrew McFadyen-Ketchum is a freelance writer, editor, ghostwriter, and writing coach. His poetry collection, Ghost Gear, was published by the University of Arkansas Press in 2014. His website is andrewmk.com.

Twenty poetry organizations from across the United States have joined forces to enhance the visibility of poetry and its growing popularity and cultural impact, beginning with a monthlong, nationwide suite of programs investigating the...