A Chicago Press for the People

On September 24, 2009, sixteen-year-old student Derrion Albert was beaten to death outside of Christian Fenger Academy High School, on the South Side of Chicago, in broad daylight. Though there were many witnesses, one of whom captured the attack on cell-phone video, no one stepped in to help. The footage of the murder went viral, highlighting the severity of the city’s youth violence epidemic, as Albert was the third teenager killed in Chicago that month. 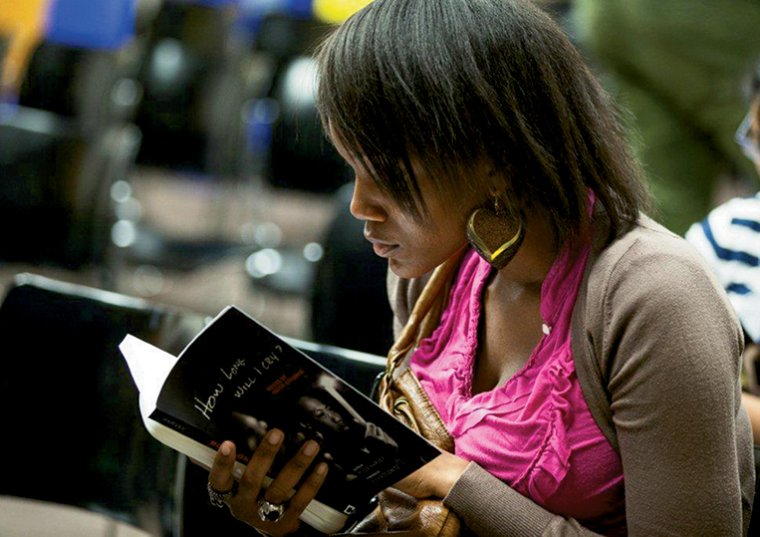 A reader absorbed in How Long Will I Cry? Voices of Youth Violence at a 2013 Chicago Public Library event.  (Credit: Kenny Wassus)

Miles Harvey, author of The King of Confidence (Little, Brown, 2020), was teaching fiction, nonfiction, and oral history to writing students at DePaul University in Chicago when news of Albert’s death reached him. He sat with his friend Hallie Gordon, then artistic director of the Steppenwolf  for Young Adults theater program, grieving the epidemic of youth violence in the city where he’d grown up and spent most of his adult life. Gordon wanted to produce a play of stories of those affected by such violence but didn’t have the resources to travel the city collecting them. Harvey thought, “I do.”

Harvey decided to work with his undergraduate and graduate writing students to document these stories, a project that would eventually lead to his partnering with colleagues Chris Green and Michele Morano to establish Big Shoulders Books. After speaking with Gordon, Harvey trained his writing students in oral history and nonfiction and set up safe places for them in all parts of the city to meet with those affected by street violence. “We talked to kids in active gangs, the county coroner, the trauma nurses who take in gun victims all night, EMTs, funeral directors, youth organizers, and families and friends of youth who had been killed on the streets of Chicago,” Harvey says. Over the course of two years, they interviewed approximately seventy residents from various neighborhoods across the city, creating more than three thousand pages of transcripts. The collected stories became the play How Long Will I Cry? Voices of Youth Violence, which toured with Steppenwolf throughout Chicago for the general public, students, and the people who’d been interviewed.

Michele Morano, the author of Like Love (Mad Creek Books, 2020) and first director, then department chair of the master’s program in writing and publishing at DePaul, recalls, “A former gang member in the audience identified himself, and kids flocked to him after the show asking, ‘How did you get out? Can you help me get out?’ Mothers in the audience who lost their children thanked us profusely. It was so impactful for everyone involved.”

Harvey collected more stories than he could fit in the production, so he compiled them into a book. “He came to me and said, ‘What do you think of starting a press?’” Morano recalls. So, with colleague Chris Green, author of Everywhere West (Mayapple Press, 2019), who had experience with social justice writing and publishing projects, and in conjunction with DePaul University, Harvey and Morano cofounded Big Shoulders Books in 2011, with a mission to publish “quality works of writing by and about Chicagoans whose voices might not otherwise be shared.” Their writers are veterans, friends and family of gun violence victims, youth in gangs, and other writers whose stories have been marginalized. And their books are given away for free.

“Our business model is no business,” Morano says. “We want our books to end up in the hands of people who couldn’t necessarily buy them.” Funded by the William and Irene Beck Charitable Trust, and supported by DePaul, Big Shoulders has published six nonfiction and poetry titles to date and has given away roughly one hundred thousand books—eighty thousand hard copies and twenty thousand digital.

All you have to do to receive a book is show up to a Big Shoulders reading or event, or order one online by leaving a message describing why you want one. Books have been requested by kids in gangs, incarcerated people, and teachers at junior high schools, high schools, and colleges in every state in America, and in India, Australia, countries across Africa, and beyond. Many readers write the press to describe the impact of their books. One, who read a Big Shoulders book while in juvenile detention, wrote: “I was so inspired and influenced with this book that I want to share it with other people who come from the same [struggles] we all face. I am since a recovered gun offender and am officially eighteen and plan to start college.” Green told DePaul Magazine in 2019, “For a small press, if you are even able to sell a thousand copies, that is a big deal. The fact that we have given away thousands of books is a minor miracle and speaks to the impact of these books.”

The press also serves as an internship-like experience for writing students at DePaul. “Students learn a lot about narrative when it’s not their narrative,” Harvey says. “When they edit someone else’s block of text, they learn a pure kind of storytelling. It makes them realize that people are naturally such great storytellers and to trust their own storytelling instinct in their writing.” Every book takes students through three courses: preproduction and book editing, the art and tech of book design, and postproduction publicity.

Currently the press is developing a book of conversations with Chicago’s immigrants, to be released in 2022. Its most recent book, American Gun: A Poem by 100 Chicagoans, edited by Chris Green, is a pantoum about gun violence. Each of its writers, including established poets and people who had never written before, wrote one stanza. Green says, “American Gun embodies the spirit of Big Shoulders. It’s a community collaboration. With the current spate of protests, it’s not about individual voices; it’s more about the chorus of voices together.”

What struck Green in editing American Gun is that, despite the book’s highly political topic, not one of the hundred poets mentioned politics in their stanza. “Because the political system has failed us, we’ve gone to this poetic place that’s more carnal than political,” he says, observing poetry’s ability to reckon with issues of social justice. “There are so many important needs right now, and poetry has some work to do.”

Gila Lyons’s writing on mental health and social justice has appeared in the New York Times; O, the Oprah Magazine; Cosmopolitan; and other publications.

The Clifton House
by LaToya Jordan | News and Trends 10.7.20

Sidney Clifton, the eldest daughter of poet Lucille Clifton, has purchased her childhood home in Baltimore with plans to recreate the space as a haven for emerging and established artists.

For the first time in its 113-year history, MacDowell launches a virtual residency in an effort to build artistic community and fellowship during a time of social distancing.