In the nineteenth episode of Ampersand, editor in chief Kevin Larimer and senior editor Melissa Faliveno preview the May/June 2018 issue, featuring over 100 contests with no entry fees, a look at the money behind free contests, a special report on extended deadlines, and tips for smart contest entries. The episode also features readings by two authors who are featured in the new issue, Leslie Jamison and Carmen Giménez Smith; an excerpt of an essay in praise of quiet books by Leesa-Cross Smith; a poem by Jenny Xie from her debut collection, Eye Level; and more.

00:01 Leslie Jamison reads an excerpt from her new memoir, The Recovering: Intoxication and Its Aftermath.

01:17 The cohosts explore the sticky-note lexicon that is growing on the edges of Kevin’s computer monitor. The collection of “words that are not words but should be words” includes liminary (“a person in the middle, in transition, of the in-between; not yet a luminary”) and préage (“the assigning of priority order to projects on the basis of how much editorial faith one has in the producer of said projects”), plus a few specifically coined for the current Writing Contests Issue, such as submaster, or supermit (“to send an application, proposal, or piece of work to an editor with purpose, power, and pride”).

11:22 “If I had to say where my drinking began, which first time began it, I might say it started with my first blackout, or maybe the first time I sought blackout, the first time I wanted nothing more than to be absent from my own life.” Leslie Jamison reads from her new memoir, The Recovering: Intoxication and Its Aftermath, published by Little, Brown in early April. In the current issue, contributor Michele Filgate asks Jamison, whose first book was a novel, The Gin Closet, what she is drawn to in nonfiction. “Part of what feels freeing about nonfiction is that you are working from the infinite world. That is honestly how the world feels to me: infinite, which is not to say that it’s always perfect or easy.” 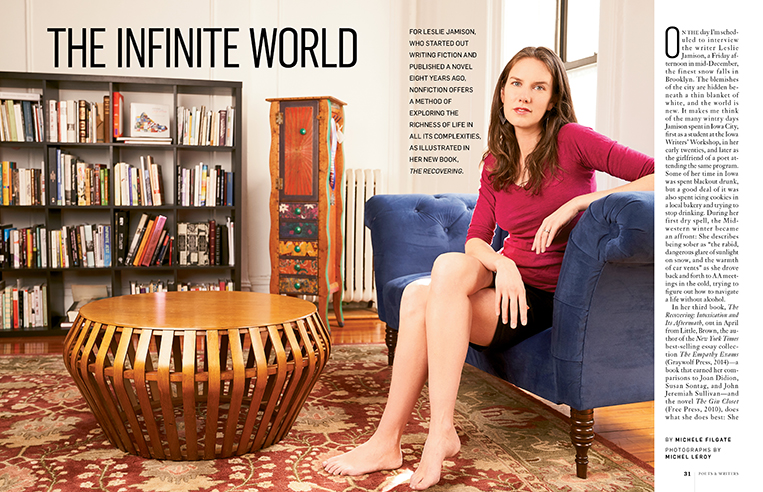 17:37 Kevin and Melissa talk to star fact-checker Nadia Ahmad, the current Diana and Simon Raab Editorial Fellow at Poets & Writers Magazine, about the importance of finding and confirming the truth in this “fake-news, post-fact world.” Nadia points out one of the facts she checked in the current issue: a reference to a Peruvian poetry movement from the eighties called Kloaka, which Nadia says is often compared to the Beat movement of the fifties. We did not know that. Lucky for us, Nadia knows.

21:57 Poet, editor, professor, and critic Carmen Giménez Smith, who was interviewed for the new issue by contributing editor Rigoberto González, reads a poem from her new collection, Cruel Futures, published this month by City Lights Books. “My belly triggers memories of the living and the dead. My belly is a good armrest for texting. I like my belly because all female bodies are intoxicating terrains” —from “Liberate Me.” 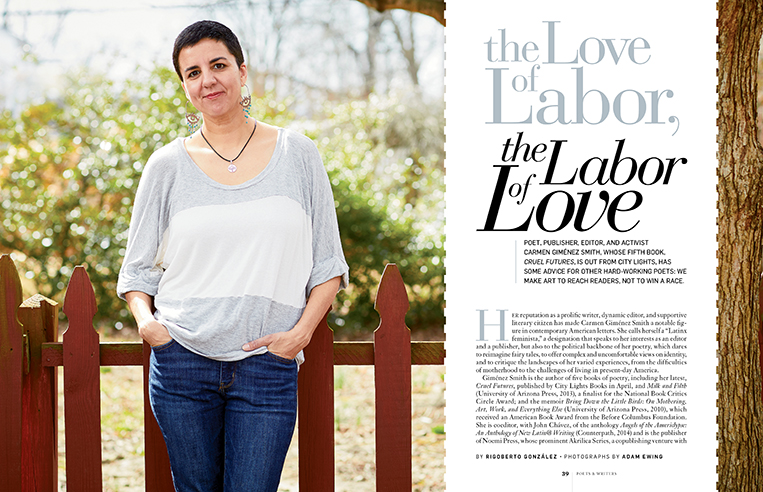 26:15 The cohosts discuss one of the pieces in the current issue’s special section—an investigation of extended deadlines. In “Two More Weeks to Submit! The Question of Extended Deadlines,” former editorial fellow Maya C. Popa takes a look at this common and, for some, thorny practice: “Whatever the reason a sponsor might extend a deadline—whether for a contest, a reading period, or a fellowship—one can hardly imagine a room full of suited, greedy editors or administrators laughing raucously as the twenty-five-dollar fees roll in,” she writes. “Still, the lack of transparency that often accompanies deadline extensions can leave the motivations of a contest sponsor up to the writer’s imagination.” Read Popa’s article and let us know what you think by sending an e-mail to editor@pw.org.

27:37 “In a noisy, confusing world where so many people love to constantly scream their opinions as loudly and as quickly as they can on social media, I am drawn to longer works that take their time. Ideas and situations that give me room to think.” Novelist Leesa Cross-Smith reads the first section of her essay in the new issue, “Some Room to Breathe: In Praise of Quiet Books.” As part of her research into the pleasures of reading and writing quiet books, Leesa Cross-Smith spoke with fellow author Silas House, whose novel A Parchment of Leaves she holds up as one of her favorite quiet books. Read their conversation here.

33:50 Yet another former editorial fellow, Jenny Xie, now an award-winning debut poet whose debut collection, Eye Level, won the Whitman Prize from the Academy of American Poets, reads “Invisible Relations,” from her new book. “Far off, you are being stitched into a storyline in the smooth lobe of another’s mind.”

35:50 Kevin and Melissa prepare to do a little préage for the summer months, in all of their disgusting humanity. (Seriously, supermit some words that aren’t words but should be words so we don’t feel alone in this languagery.)

Ampersand: The Poets & Writers Podcast is a production of Poets & Writers, Inc., and is edited and mixed by Melissa Faliveno. Music for this episode is provided by Podington Bear, Kevin MacLeod, Ryan Little, the Vivisectors, Ikebe Shakedown, and Planet Wardo. Comments or suggestions? E-mail ampersand@pw.org.

An investigation into a common, and complicated, practice.

Some Room to Breathe: A Conversation in Praise of Quiet Books
by Leesa Cross-Smith | 4.11.18