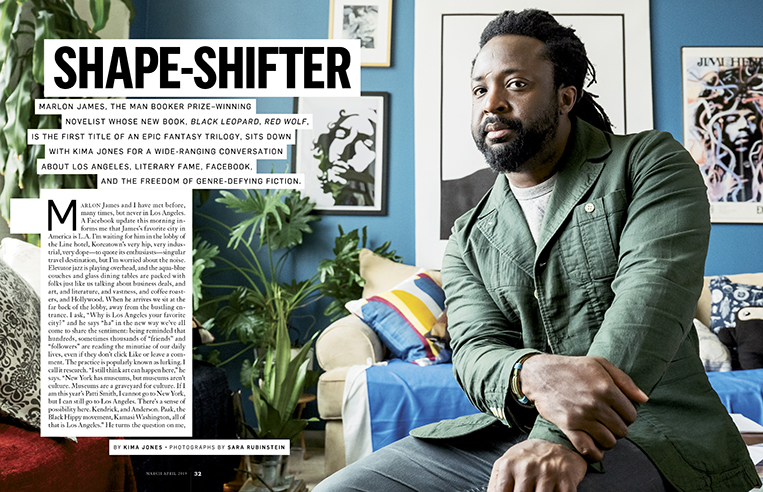 The opening spread of this issue’s cover profile of Marlon James by Kima Jones. Photo by Sara Rubinstein.

02:40 Marlon James, the author of three previous books of fiction, including the Man Booker Prize winning novel A Brief History of Seven Killings, is back this month with Black Leopard, Red Wolf, the first installment of his Dark Star Trilogy, an epic fantasy that’s being called “The African Games of Thrones.” And this book is truly epic: It follows two shape-shifting mercenaries, Leopard and Tracker, on an odyssey through a Dark Ages version of the African continent, across ancient cities and dense forests, in search of a missing boy. Along the way they encounter all sorts of mythical creatures, including vampires, witches, wizards, trickster monkeys, and one very wise buffalo. Adventure and swashbuckling ensue, but so do deeper explorations: of truth, power, queerness, and the desire to understand one another. 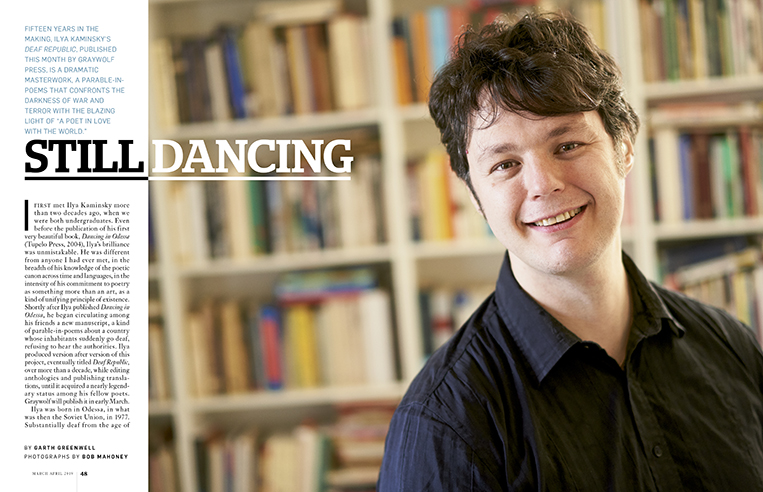 The opening spread of this issue’s conversation between Ilya Kaminsky by Garth Greenwell. Photo by Bob Mahoney.

12:03 Ilya Kaminsky’s new book, Deaf Republic, is a kind of parable-in-poems set in an unnamed occupied territory during a time of political unrest. The poetic narrative starts with a gunshot: While breaking up a protest, a soldier shoots and kills a young deaf boy—and this horrific act renders the entire town deaf. The citizens coordinate their silent insurgency with sign language as the book follows the private lives of townspeople encircled by public violence. It’s a love story, a collection of poems about terror and carnage and witness and political dissent—and the power of puppeteering. Ilya was born in Odessa, in what was then the Soviet Union, in 1977. Substantially deaf from the age of four, he spoke no English when he immigrated to the United States with his family at sixteen. And yet he studied at the University of Rochester and Georgetown University and has a JD from the University of California, Hastings College of the Law. His honors include a Whiting Award, the American Academy of Arts and Letters Metcalf Award, a Lannan Fellowship, Poetry magazine’s Levinson Prize, and a Guggenheim Fellowship. He is the editor in chief of the literary journal Poetry International and, after several years teaching in the graduate creative writing program at San Diego State University, Ilya now holds the Bourne Poetry Chair at Georgia Tech. 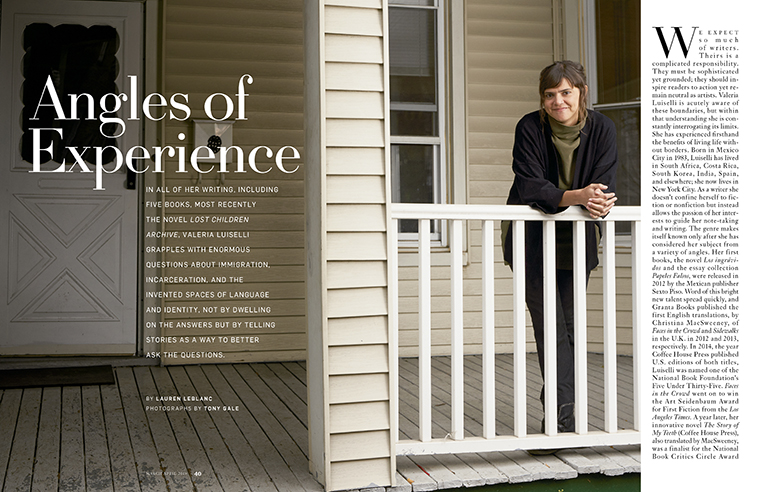 The opening spread of this issue’s interview with Valeria Luiselli by Lauren LeBlanc. Photo by Tony Gale.

19:44 Valeria Luiselli’s new novel, Lost Children Archive, follows a family of four—whose names and ethnicities we never learn—as they road-trip across the country, from New York to Arizona. The couple are audio archivists, and their destination on this journey is Apacheria, the place the Apaches once called home. “Why Apaches?” asks the ten-year-old son. “Because they were the last of something,” answers the father. The family, which is facing a crisis of its own, is trying to hold onto its own foundations while attempting to understand those of the country across which they travel. It’s a book that is at once a great American road trip novel and an investigation of the complexities of family, immigration, justice, and equality in the United States. Born in Mexico City in 1983, Luiselli has lived in South Korea, India, Spain, and elsewhere; she now lives in New York, where she teaches a creative writing workshop with her niece, at an immigration detention center, to mostly Guatemalan children for whom Spanish is their second language. In the fall she will begin teaching at Bard College, where he was recently appointed writer in residence. She is the author of four previous books, including Tell Me How It Ends: An Essay in Forty Questions, The Story of My Teeth, Faces in the Crowd, and Sidewalks.

27:48 The cohosts talk about one of their favorite subjects—made-up words!—after receiving an e-mail from Jim Armstrong, an avid listener of Ampersand who shared a project in which he came up with a new word for each letter of the alphabet, including wrught, vocabullary, and emaul. On his website, armstrongwords.com, he offers the definition and etymology of each word, then provides some useful examples. Thanks for reaching out, Jim!

This episode is brought to you in part by the Sewanee Writers’ Conference. From July 16–28, the University of the South will host the 30th annual Sewanee Writers’ Conference. Thanks to the generosity of the Walter E. Dakin Memorial Fund, supported by the estate of Tennessee Williams, the Conference will gather distinguished faculty to provide instruction and criticism through workshops and craft lectures in poetry, fiction, and playwriting. Fellowships and scholarships are available, and the application deadline is March 20. Apply online and find out more at sewaneewriters.org.

Ampersand: The Poets & Writers Podcast is a production of Poets & Writers, Inc., and is edited and mixed by Melissa Faliveno. Music for this episode is provided by YACHT, BitBasic, Adam & Alma, and Clinic. Comments or suggestions? E-mail ampersand@pw.org.

In this continuing series, a book critic discusses the unique challenges of reviewing for radio and how she picks the books that make it on the air.