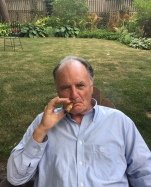 A new book, Taking the Train of Singularity South from Midtown, will be published by Backwaters Press January 15, 2017. The title poem is a homage to New York, pluralism, and our glorious, flawed republic. A previous volume, Marrowbone Lane, was a "Highly Recommended" choice by the Boston Authors Club in 2010.

I write poetry daily, about three hours, and spend other time as a journalist and playwright. A one-act, The Early Bird Special, was a finalist in the 2016 Tennessee Williams competition and was invited to the Strawberry One-Act Festival in New York in July of 2016.

My non-profit company, American Storyboard, has produced award-winning features: "Gloucester's Adventure" and "Women in American Horse Racing" ran on PBS outlets in 2002 and 2008. Details are available on IMDB.

Gives readings:
Yes
Travels for readings:
Yes
Identifies as:
Irish American
Prefers to work with:
Any
Fluent in:
French
Born in:
San Diego
Raised in:
Chicago, IL
Illinois
Please note: All information in the Directory is provided by the listed writers or their representatives.
Last update: Jul 25, 2016
X