The Swedish Academy has named Polish author Olga Tokarczuk and Austrian author Peter Handke the winners of the Nobel Prize in Literature for 2018 and 2019, respectively. They will each receive 9 million Swedish krona (approximately $915,000). 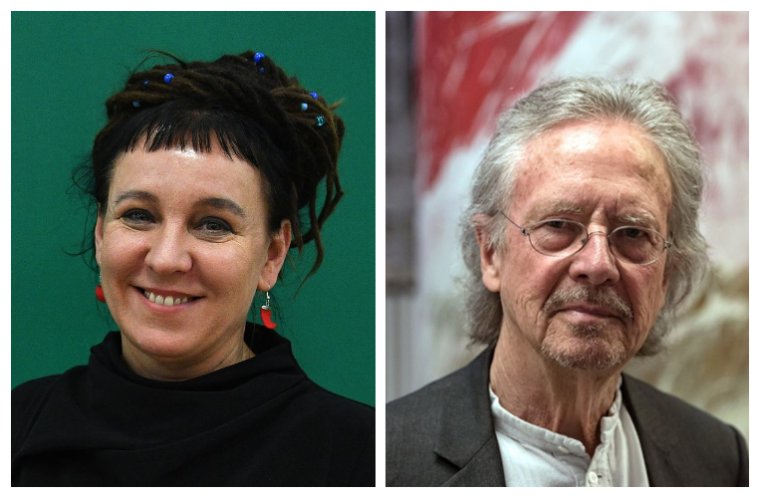 Olga Tokarczuk and Peter Handke, winners of the 2018 and 2019 Nobel Prize in Literature, respectively.

In an announcement made today in Stockholm, the academy commended Tokarczuk’s “narrative imagination that with encyclopedic passion represents the crossing of boundaries as a form of life,” and Handke’s “influential work that with linguistic ingenuity has explored the periphery and the specificity of human experience.”

2018 Nobel laureate Olga Tokarczuk was born in Sulechów, Poland, in 1962, and now lives in Wrocław. After studying psychology at the University of Warsaw, she made her debut as a fiction writer 1993 with Podróz ludzi Księgi (“The Journey of the Book-People”). Her breakthrough came with her third novel, Prawiek i inne czasy, in 1996 (“Primeval and Other Times”), a family saga that deals with the history of twentieth-century Poland. The academy particularly commended her 2014 historical novel, Księgi Jakubowe (“The Books of Jacob”), as a “rich, epic fresco” and “an excellent example of the new Polish literature after 1989, resisting moral judgement and unwilling to represent the conscience of the nation.” Tokarczuk won the 2018 Man Booker International Prize for her 2007 novel, Bieguni, translated in 2017 as “Flights.”

Tokarczuk, the committee noted, “never views reality as something stable or everlasting. She constructs her novels in a tension between cultural opposites; nature versus culture, reason versus madness, male versus female, home versus alienation.”

The 2019 Nobel laureate, Peter Handke, was born in Griffen, Austria, in 1942, and now lives in Chaville, France. He left his studies in law at the University of Graz upon the publication of his debut novel, Die Hornissen (“The Hornets”), in 1966; his play Publikumsbeschimpfung (“Offending the Audience”), was staged that same year. In the fifty years since, Handke has written novels, essays, dramatic works, and screenplays, establishing himself, in the words of the academy, “as one of the most influential writers in Europe after the Second World War.”

“The peculiar art of Peter Handke,” the academy remarked, “is the extraordinary attention to landscapes and the material presence of the world, which has made cinema and painting two of his greatest sources of inspiration.” The committee stated that in works such as Mein Jahr in der Niemandsbucht: Ein Märchen aus den neuen Zeiten from 1994 (“My Year in the No-Man’s Bay”), Handke “subverts our ideas of the centrally governed state, and makes us realize that the center is everywhere.”

Since 1901, the Nobel Prize in Literature has been presented 112 times, recognizing 116 writers who have produced “the most outstanding work in an ideal direction.” The presentation of the 2018 prize was postponed in the wake of a sexual abuse and financial misconduct scandal involving a man with close ties to the Swedish Academy, the committee that administers the award. Following a series of resignations and expulsions, new members have been elected to the committee and new regulations introduced, including a new system for selecting Nobel laureates.

Tokarczuk’s win makes her the fifteenth woman to be awarded the Nobel Prize in Literature. The last female laureate was Belarusian journalist and nonfiction writer Svetlana Alexievich in 2015. Other recent winners include English novelist Kazuo Ishiguro in 2017 and singer-songwriter Bob Dylan in 2016.

One Book, One New York reading list; Dave Eggers on why Trump might win again; George Saunders on making it into the New Yorker; and other news.