Belarusian author and investigative journalist Svetlana Alexievich has received the 2015 Nobel Prize in Literature. The prize was announced today in Stockholm by Sara Danius, permanent secretary of the Swedish Academy, who called Alexievich’s writing “a monument to suffering and courage in our time.” 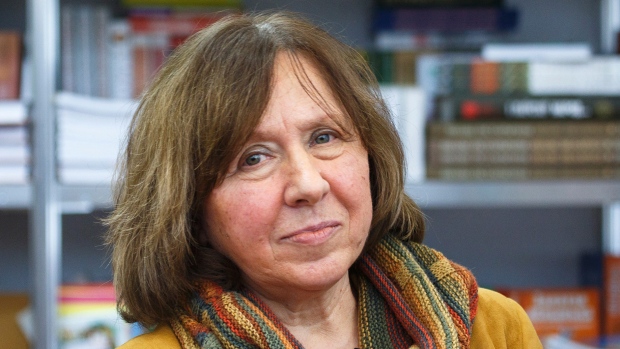 Alexievich is the author of seven books, including Voices From Chernobyl: The Oral History of a Nuclear Disaster (Dalkey Archive Press, 2005), for which she interviewed more than five hundred eyewitnesses of the 1986 nuclear plant disaster in Ukraine—including firefighters, doctors, physicists, politicians, and citizens—over a period of ten years. The book was awarded the 2005 National Book Critics Circle Award for nonfiction.

Her other works—such as 1988’s War’s Unwomanly Face, comprised of interviews with hundreds of women soldiers who fought in World War II—collect the memories of wartime, including the Soviet-Afghan war, the war in Afghanistan, and the fall of the Soviet Union, creating what Danius calls “a history of emotions—a history of the soul, if you wish.”

“By means of her extraordinary method—a carefully composed collage of human voices—Alexievich deepens our comprehension of an entire era,” the academy noted. “For the past thirty or forty years, she has been busy mapping the Soviet and post-Soviet individual. But it’s not really about a history of events…. What she’s offering us is really an emotional world.”

Alexievich was born in Stanislav, Ukraine, in 1948, and grew up in Belarus. She worked as a reporter for several local newspapers, a Belarusian carp fishing magazine, and a Minsk-based literary magazine before dedicating her work to oral histories. Persecuted by Lukashenko regime for the nature of her writing, Alexievich left Belarus in 2000 and lived under sanctuary for a decade in Paris, Gothenburg, and Berlin, before returning to Minsk in 2011.

She becomes the fourteenth woman to win the Nobel Prize in literature since it was first awarded in 1901. The last woman to win, Canada’s Alice Munro, received the award in 2013. French novelist Patrick Modiano won the 2014 prize. Alexievich will receive eight million Swedish kronor, or approximately $1.1 million.