The Legacy of the NOMMO Literary Society

Many of you may not know that NOMMO was founded by Salaam in New Orleans in 1995, a rare Black writers workshop established a year before Cave Canem. That summer, Salaam had led a writing workshop for male students on the invitation of Tommye Myrick at Southern University New Orleans. Poet Ayo Fayemi-Robinson (formerly known as Kysha Brown Robinson) then questioned Salaam about the exclusion of women writers in the workshop and from that encounter, NOMMO was born and had its first meeting that fall.

The workshop consisted of three parts: a selected reading, a “housekeeping” to share information about upcoming literary events and resources, and giving and receiving feedback on original compositions. The physical space of NOMMO had shelves full of books and CDs of music by Black artists, and there was a monthly reading held at Community Book Center.

The name NOMMO has two origins. First is the central African concept of NOMMO being the power of the spoken word. Second is from Salaam’s sarcastic quip that it was time for the elevation of the Black vernacular and “no more of that literary shit.” The workshop met weekly and hosted several prominent writers, such as Amiri Baraka, Staceyann Chin, Toi Derricotte, Terrance Hayes, Major Jackson, E. Ethelbert Miller, and Sonia Sanchez.

Hurricane Katrina ended NOMMO in 2005, but the legacy lives on through published books by alumni like Jericho Brown, Jarvis DeBerry, Freddi Williams Evans, and Keturah Kendrick.

New Orleans has a long literary history, including the 1845 publication of Les Cenelles, the first anthology of poetry by African Americans which featured the work of seventeen New Orleans poets. NOMMO was a continuation of this rich tradition of African American writing that lives on today. 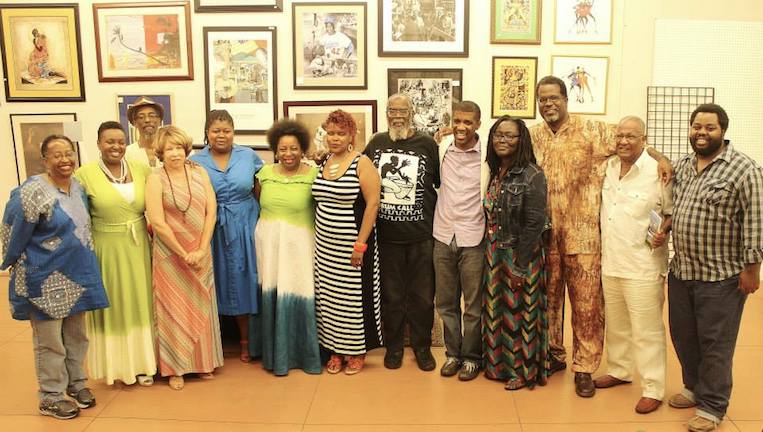 NOMMO Literary Society reunion at Community Book Center in 2014. (Credit: NOMMO)
Kelly Harris is the literary outreach coordinator for Poets & Writers in New Orleans. Contact her at NOLA@pw.org or on Twitter, @NOLApworg.