The Intersection of Art and Literature

When Lisa Pearson was a student in the MFA program in fiction at the University of Oregon, she had trouble finding a place for her type of writing. “My work was influenced by visual artists, filmmakers, and theater,” she says, “but neither the faculty nor my fellow students seemed interested in Sophie Calle, Maya Deren, or Elizabeth LeCompte.” This sparked a question in Pearson: If as a young writer she wanted to create multidisciplinary literature but could find no structure or outlet for it, who else was being similarly held back? “It made me wonder about what kinds of self-censorship writers were inflicting on themselves,” she says. She decided to create a space to encourage and publish work that embraced both literary and visual work. 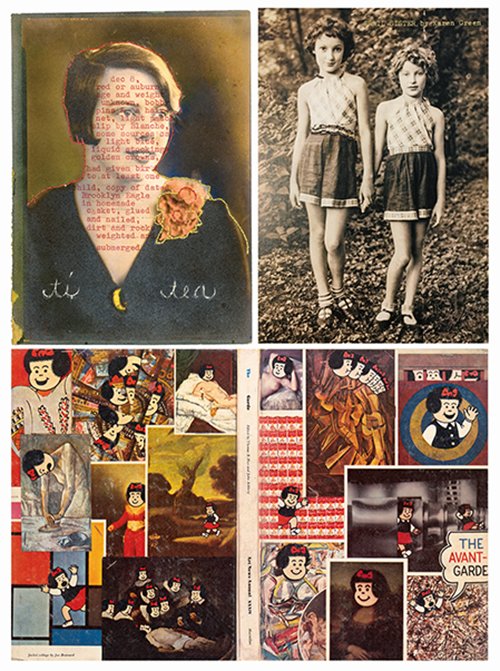 Clockwise from top left: An interior image from Frail Sister; the cover of the book by Karen Green; “Untitled (‘The Avant-Garde’), Art News Annual #34,” as it appears in Siglio's first title, The Nancy Book (2008) by Joe Brainard.

In 2008 Pearson founded Siglio Press, an independent publisher that carries the motto “Uncommon books at the intersection of art & literature.” Over the past ten years, during which time Pearson moved the press from Los Angeles to New York’s Hudson River Valley, Siglio has published more than two dozen books by image-text pioneers such as Calle, Dick Higgins, and Marcel Broodthaers. Pearson has also brought to light the radical autobiographical drawings, paintings, and recipes of Dorothy Iannone, the handmade stamps of Vincent Sardon, and the intimate sketches, collages, and writings of Robert Seydel, a close friend of hers who died in 2011. This fall Siglio will publish two new titles: Karen Green’s Frail Sister, a “fictional archive of altered photos, letters, collages, and drawings” inspired by Green’s aunt who went missing, and Intermedia, Fluxus and the Something Else Press: Selected Writings by Dick Higgins, edited by Steve Clay and Ken Friedman.

Siglio’s first book, published in 2008, was a collection of poet and visual artist Joe Brainard’s “Nancy” comics. Pearson proposed the idea for The Nancy Book to poet Ron Padgett, Brainard’s artistic and literary executor. “The result surpassed my rising expectations,” says Padgett. “I am so glad to have had the chance to work with [Pearson], and I know Joe would have liked her enormously.” Pearson cites “Brainard’s playfulness, his joy, his sense of wonder” as qualities “even the most serious Siglio books have.”

Siglio exists not only at the crossroads of words and pictures, but at the intersection of intellect and humor. Titles span categories including artists’ books, poetry, and comics, all while remaining uninhibited by these classifications. “There have been so many cross-genre, inter-media movements in art,” says Elizabeth Zuba, who worked with Pearson on several books as an editor and a translator. “But the purveyors of art and the journalism around it can still be, generally speaking, really shockingly divided by category.” When Zuba was working on a translation of Broodthaers’s poetry and compiling an anthology of Ray Johnson’s writing, she learned of Siglio and recognized it would be the right publisher for both projects. “I knew that I could likely find an art publisher, and maybe I could find a poetry publisher, but I wanted both,” she says. Siglio rejects the assumption that one artistic practice must kneel to the other, and as such its books often highlight the writings of artists known primarily for their visual work, like Broodthaers, and the visuals of artists known mainly for their writings, like Brainard.

Siglio is a “wunderkammer”—in Zuba’s words—a cabinet of curiosities that expands and transforms what is expected of visual-verbal literature, including the assumption that multidisciplinary books should include images. This is seen, for instance, in the novel S P R A W L (2010), by Danielle Dutton, which engages with the photographs of Laura Letinsky. The book doesn’t incorporate the photos themselves but is visually striking in its own way: The 144-page book has no paragraph breaks, with page after page of justified text representing the monotony of suburban life. “I think S P R A W L was in many ways the outlier on the Siglio list, but that made it especially interesting to me,” Dutton says. Every aspect of a Siglio title is unique, from its layout and design to its size and paper texture. The physical objectness of Siglio books is what sets them apart.

“What seemed ‘uncategorizable’ ten years ago has changed, and I’m always pushing to the margins to find what now defies categories and challenges paradigms,” says Pearson, who accepts book query submissions in the summer. In the ten years since Siglio was founded, a number of other publishers, including New Directions, Ugly Duckling Presse, and Semiotext(e), have been producing intersectional, interdisciplinary books. Siglio both contributes to and pushes the limits of this expanded publishing landscape.

“[Siglio books] nurture an audience for these works who will embrace and engage them,” Pearson says, “so that they enter the world as if they were inevitable, even necessary—rather than impossible or improbable.”

Megan N. Liberty is the art books editor at the Brooklyn Rail. Her writing has appeared in the Los Angeles Review of Books, Hyperallergic, Art in Print, and elsewhere. Find her on Twitter, @meganlib.

An increasing number of classic books, such as To Kill a Mockingbird and Anne Frank’s diaries, are being adapted into graphic form.

Colorful illustrations accompany notes, quotes, and literary trivia about books to read and bookstores to visit.