In late 2016 artist Fred Fordham was having coffee with his agent. “Glancing around conspiratorially,” Fordham recalls, “she passed me a notebook in which she had written, ‘How would you like to do some sample pages for a graphic novel of To Kill a Mockingbird?’” A few weeks later, Fordham met with the team at Penguin Random House UK, who asked him to adapt and illustrate Harper Lee’s iconic coming-of-age story. The result, To Kill a Mockingbird: A Graphic Novel, was published in October by Penguin Random House UK and HarperCollins in the United States. 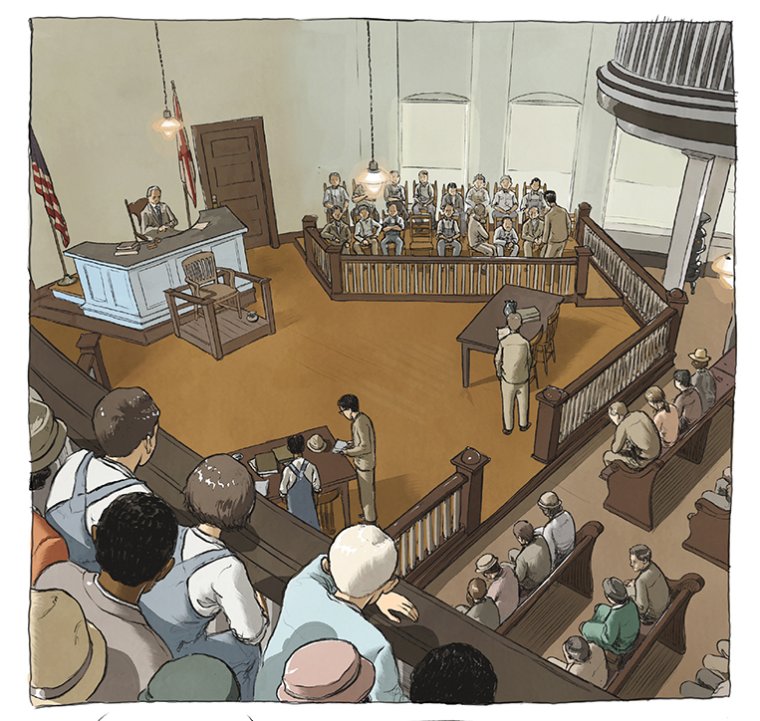 A scene of Tom Robinson’s trial from To Kill a Mockingbird: A Graphic Novel.

Fordham’s agent may have added a conspiratorial flair to her proposal, but creating a graphic adaptation of a classic text is a fairly common occurrence for major publishers these days. In the past several years, HarperCollins has published graphic editions of Allen Ginsberg’s Howl (2010), Paulo Coelho’s The Alchemist (2010), and Abraham Lincoln’s “Gettysburg Address” (2013). Farrar, Straus and Giroux has tackled the 9/11 Commission Report (2006) and Shirley Jackson’s “The Lottery” (2016), while Square Fish, a children’s imprint of Macmillan, has taken on Madeleine L’Engle’s A Wrinkle in Time (2012). There have been graphic versions of Shakespeare’s King Lear (Hachette, 2006), Marcel Proust’s In Search of Lost Time (Norton, 2015), and Homer’s The Odyssey (Bloomsbury, 2012). Penguin Random House’s graphic novelization of Margaret Atwood’s The Handmaid’s Tale is set to come out in March 2019. And those are just the titles put out by major publishers; many indie houses have been releasing graphic adaptations of classics for years.

In October Pantheon published a graphic edition of The Diary of a Young Girl, reimagined as Anne Frank’s Diary: The Graphic Adaptation, by Ari Folman and illustrated by David Polonsky. The adaptation of both To Kill a Mockingbird and The Diary of a Young Girl—two of the best-selling books of all time, with forty million and thirty million copies sold, respectively—seems to herald the full arrival of the form. “In the last four or five years, there has been a huge uptick in adaptations,” says Pantheon’s Keith Goldsmith, editor of Anne Frank’s Diary. “We live in a visual culture, and this is building upon that. The genre has really come into its own right.”

In his forty years in publishing, Goldsmith had never edited a graphic book before the Anne Frank Fonds, the Swiss foundation that owns the diary’s copyright, approached him with the project. “The foundation had clearly already spent an immense amount of time making the book with David and Ari,” Goldsmith says. “They did all the heavy lifting.”

In addition to adapting the diary into graphic form, Polonsky and Folman were also commissioned by the foundation to make a movie. (The pair is best known for their 2008 film, Waltz With Bashir, an animated documentary of Folman’s harrowing experiences as an Israeli soldier during the 1982 Lebanon War.) Polonsky and Folman were given creative freedom to interpret the diary to suit the graphic form, yet they chose to keep Frank’s most memorable, philosophical entries completely intact. “When it is pure literature, I think it would be offensive to translate it into graphic language,” Folman said in an interview with the Anne Frank Fonds. “You have to keep it as in the original.” Other sections were turned into illustrations, drastically shortened, or cut altogether.

Polonsky and Folman also highlight Frank’s sense of humor throughout the book. The character of Mrs. van Daan is often drawn sitting on her prized chamber pot, and her antics are sometimes rendered as melodramatic scenes from contemporaneous films like Gone With the Wind. When the character of Anne compares herself to her perfect older sister, she becomes the horrified subject of Edvard Munch’s The Scream. Margot, meanwhile, embodies Gustav Klimt’s golden Portrait of Adele Bloch-Bauer I. “The only people [Anne] could refer to were the people in hiding with her, and the way she observed them was unbelievably intelligent and in many ways funny,” Folman says. “I want to glorify the funny parts in her writing and observations and put them into graphic language as much as I can.”

While Polonsky and Folman found their visual inspiration in Frank’s humor and the popular culture of her time, Fordham drew much of the aesthetic for his adaptation of To Kill a Mockingbird from Harper Lee’s hometown of Monroeville, Alabama, spending ten days researching and drawing the town that Lee fictionalized as Maycomb in her novel. “It is striking just how much Lee was writing what she knew,” Fordham says. “The description of the layout of the town, the location of the school, the bend in the road where she places the ‘Radley lot’—it all maps Monroeville as it then was.” In tribute Fordham’s graphic novel is set in a Maycomb that’s the mirror image of Monroeville; the Finch house in the new adaptation is the one where Lee herself grew up.

Like Polonsky and Folman, Fordham had to drastically cut down the original text. “To Kill a Mockingbird is probably technically easier to adapt to the comics medium than some classics since it has so much rich dialogue,” he says. “And for all the eloquence of Lee’s prose, the story is actually told pretty straight.” Fordham estimates that he ended up using about a quarter of Lee’s novel, “bearing in mind that most of the visual description is translated into drawings.” But 90 percent of the text in the graphic novel, he says, is quoted directly from Lee’s book.

Polonsky, Folman, and Fordham all see themselves less as adapters and more as translators—from text into visual language—who understand that something is always bound to be lost in translation.

“Some novels will probably lose their essence in the comics medium, and it’s important to be able to recognize this,” Fordham says. “This isn’t due to the unique weaknesses of graphic novels but to the unique strengths of literature. Adapting a classic text solely to, say, make it ‘easier’ to read, will likely end up doing both the original book and the graphic novel form a disservice.”

Elena Goukassian is an arts writer who lives in Brooklyn, New York. Her most recent work appears in Atlas Obscura, the Calvert Journal, the Art Newspaper, Artsy, and Hyperallergic.

The Intersection of Art and Literature
by Megan N. Liberty | News and Trends 10.10.18

The Written Image: Imagine Wanting Only This
by Staff | News and Trends 4.12.17

Writer and artist Kristen Radtke’s debut graphic memoir, Imagine Wanting Only This, combines vivid illustrations with an unflinching investigation of loss, memory, and the construction and dissolution of the self.