This week’s installment of Ten Questions features Weike Wang, whose second novel, Joan Is Okay, is out today from Random House. By her own account, Joan is not a creative or social person. An ICU doctor in New York City, she prefers numbers and the company of machines. “Machines can tell you things that the people attached to them can’t,” she says. Then a series of changes force her to confront her life anew: Her father dies, her mother travels from China for what is intended to be a temporary visit, a new neighbor moves in on her floor, and a crisis descends on New York City. As Joan navigates new and uncertain terrain, she offers up subtle, yet startling insights on work, family, and identity. “Unflinchingly, Joan Is Okay challenges some of our fundamental views on home, belonging, family,” writes Ha Jin. “A smart, quietly engaging novel that is also warm and moving.” Weike Wang is a graduate of Harvard University, where she earned her undergraduate degree in chemistry and her doctorate in public health. She received her MFA from Boston University. Her debut novel, Chemistry (Knopf, 2017), won the PEN/Hemingway Award, and Wang was selected as a 5 Under 35 honoree of the National Book Foundation. She lives in New York City. 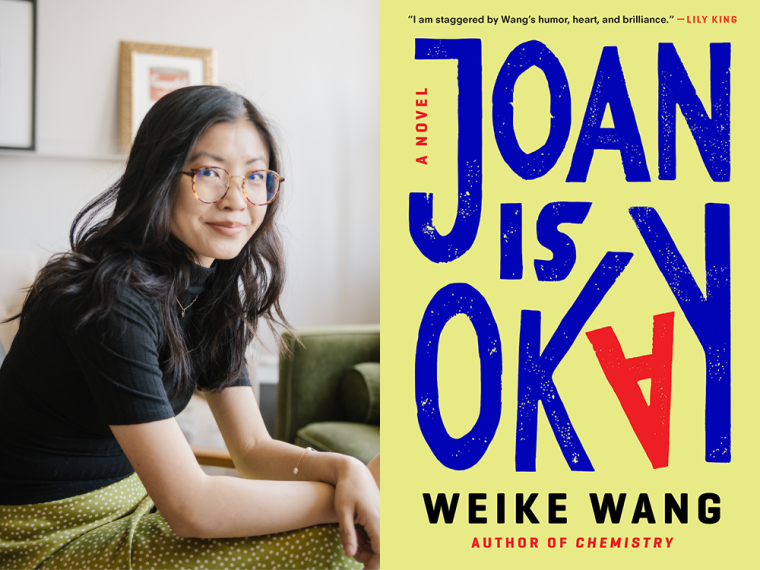 1. How long did it take you to write Joan Is Okay?
In total about three years. Coming up with the idea, though, took about two, which I’m not including in the total because I was writing something else during that time, a failed novel about two friends. I kept getting stuck and discouraged. Then one of the friends began to interest me more and this character went on to become Joan, while the other character slowly morphed—and was trimmed down—into Joan’s neighbor.

1. Not knowing where you’re going in the middle and perpetually wondering if you should give up. Middle equals muddle—what Peter Ho Davies calls it in his fabulous book about revision, which I’ve just finished.
2. Working through the crazy inefficient process of writing and being asked, almost immediately upon bumping into someone I know and who knows I’m writing a book, “Hey, how’s that book going?”

For this book in particular, a challenging aspect was the incorporation of certain present-day events, without letting those events consume the story. But no spoilers here, so you will have to read and find out how I did it!

3. Where, when, and how often do you write?
I write at home, at my desk, on a desktop, surrounded by cups of fluids like coffee, hot water, sparkling water, and later in the day, wine. I prefer to write in the morning before anyone else is awake and when it’s still dim outside. Then throughout the day, while I’m working/teaching, I will jot down ideas for the next morning on a small white pad that I keep next to my keyboard. During the editing process of Joan Is Okay, I got up at 6 AM for many months to write. If I’m immersed in a project, I will write every day for as long as I can. For all housekeeping matters like buying more paper towels, dog food, and so on, my husband will try to catch me before I get to my desk. He says once I’m at my desk, I tend to disappear and not acknowledge him. I don’t disagree. I can’t write with anyone else in the room. I can’t write in new, exotic locales or in public locations. Which rules out libraries, coffee shops, artist communes, writing retreats in dilapidated castles—basically any place inspired writers are supposed to write.

4. What are you reading right now?
I was reading The Art of Revision: The Last Word by Peter Ho Davies over the holiday break. It was recommended to me by a writer-friend, Linda Feng, and now I highly recommend it to you all. Davies studied physics in college so with that STEM similarity between us, I found his analytical approach to revision both reaffirming and insightful. The book is short but packed with craft wisdom that’s worthy of close study. Before that I’d—finally—finished As I Lay Dying. The previous times I’d tried to read that book, I embarrassingly never made it past page fifty. I wasn’t sure what Faulkner was trying to do, I wasn’t sure if he was trying to be funny—he was—so I would put the book down. Once I got over myself and finished the book, I knew I would never forget it. But this semester in particular I wasn’t able to read as I would’ve liked, beyond the occasional magazine short story. Because of how adjunct teaching works—you get work when you can and when you get it you feel obligated to accept—I had a three-class load plus a handful of graduate theses to advise. In total I was reading two to three hundred pages per week of student work. That much reading of nascent writing can slow a person down, can make her want to just zone out in front of a television or any white noise producing bright light.

5. Which author, in your opinion, deserves wider recognition?
Hard question. The writers whom I read and love are all fairly well known in the literary world. If I’m thinking fantastically, I suppose I would wish for literary fiction writers to see the same kind of wide recognition that more commercial writers do, like J.K Rowling. I only mention J.K Rowling because whenever I introduce the concept of creative writing to someone unfamiliar with it, they always ask or joke if I’m going to be the next J.K. Rowling. In the short span of a conversation, we might never move past J.K. Rowling. I’m either her or I’m not. And sometimes that can feel like an existential crisis, which I’m sure many aspiring literary fiction writers experience when faced with external confusion around their ambitions and questions like what is literary fiction and why is it important?

7. What is one thing that your agent or editor told you during the process of publishing this book that stuck with you?
During our many calls about Joan, and as we kept pushing back deadlines, my editor Robin Desser reminded me a few times, “Weike, you can only do a book once.” That’s an obvious point, but also an important one to remember. Publication is always desirable though not at the expense of quality or what’s best for the story.

8. What, if anything, will you miss most about working on the book?
I will miss thinking about Joan and her world every second of every day, even when I wasn’t writing, even when I didn’t want to think about her, even in my sleep. But I also won’t miss this so much—a character’s ability to usurp the writer’s entire mind, and to stay there for an unknown amount of time, maybe years, like an unwelcome guest who offers nothing, but also a guest I desperately wanted to please and get to know.

9. Who is your most trusted reader of your work and why?
My husband. He’s usually my first and last reader. How I function is anything I want him to read I paste directly into an e-mail with the subject line Please Read Now. Often, he does read it right away or within the hour because he knows I can panic and then delete too much. He is a very careful reader and helps me pinpoint what exactly I want to say. For Joan Is Okay, he’s had to read hundreds of my e-mails. Not so surprising, most of that novel was grammar-checked by Gmail, and I often found myself editing a scene I’d just sent my husband via e-mail, via another e-mail. My husband says living with a writer who has access to this type of technology is incredibly difficult. So, I try to make him look good when I can, like in this question.

10. What’s the best piece of writing advice you’ve ever heard?
No best, just a few, collected from generous teachers I’ve had along the way:

What I like to tell my students on the first day of class: I come from a research-centric background, and writing is a lot like research. In the beginning, what you don’t know greatly surpasses what you know, and while that can be daunting, it doesn’t stop true scientists from pushing forth and testing ideas. Similarly, a writer has to be willing to take risks and be uncomfortable for a long time, tinkering, fixing, rearranging in the dark, before a story starts to take shape.

Weike Wang reads from her novel Joan Is Okay, published in January 2022 by Random House.
X