This week’s installment of Ten Questions features Obed Silva, whose debut memoir, The Death of My Father the Pope, was published on December 7 by MCD. Silva’s memoir begins in the immediate aftermath of his father’s death. In the early hours of the morning in California, he receives a call from his distraught brother in Mexico, who informs him their father has succumbed to his lifelong alcoholism. Scarred by the violence of his father’s addiction, Silva briefly wavers about even attending the funeral, but quickly commits to looking closely at his father, at times even addressing him directly in the text: “When I see you again, will you receive me with open arms after I have written all of these terrible words about you, after I have told the truth?” Written with both great anger and tenderness, The Death of My Father the Pope is a uniquely rigorous study of grief and inheritance. “Obed Silva’s memoir is a magnificent and poignant achievement,” writes Greg Boyle. “Like the great literary giants he weaves throughout this narrative, we are brought to a rich and luminous excavation of the father wound, of the contours of death and the sure triumph of love.” Obed Silva was born in Chihuahua, Mexico, and immigrated to the United States as a toddler. A former gang member—he is paralyzed from the waist down, the result of a gunshot wound—he earned a master’s degree in medieval literature and is now an English professor at East Los Angeles College. 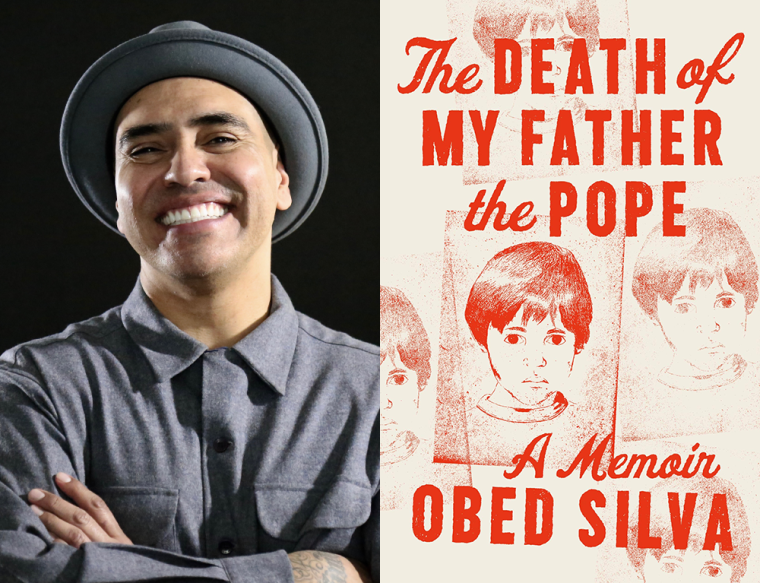 Obed Silva, author of The Death of My Father the Pope. (Credit: Dario Debora)

1. How long did it take you to write The Death of My Father the Pope?
I started to write the book on July 14, 2009, the day after receiving the news that my father had passed away. I was on a plane to Chihuahua, Mexico, when I opened my journal and started to put pen to paper. Approximately ten years later, sometime in December 2019, after many, many exhausting revisions, the book was completed and sent off to Daniel Vazquez, who at the time worked with the editor of my great friend Héctor Tobar. A couple of weeks later, before the year was up—I don’t recall if it was before or after Christmas, but it was a nice present either way—I received an e-mail from Daniel telling me that they wanted to publish not only The Death of My Father the Pope but also the sequel, In the Hands of My Mother, which I am currently working on. Of course I said yes, signed the contract, and here we are now.

3. Where, when, and how often do you write?
When writing The Death of My Father the Pope I would often write late at night, when it was the most quiet for me. I now try to write during the day in my office at East Los Angeles College, hours before my first class begins. I’m trying to make it routine, and so far it has been working out. Because of COVID, the campus is pretty empty and the buildings are quiet, so I arrive early, close my door, and start typing. Other times I just try to squeeze it in when I can. Sometimes I’ll be at a bar or restaurant or coffee shop, and I’ll just take out my journal and begin writing.

4. What are you reading right now?
I am reading a number of books right now. I tend to do that. I’ll have one book at home, one in my office on campus, one in my car, and others in other places that I read depending on where I am at the moment. Here they are: A Prayer for Owen Meany by John Irving, The Last Great Road Bum by Héctor Tobar, I Know Why the Caged Bird Sings by Maya Angelou, and I most recently started The Saints of Santa Ana by Jonathan E. Calvillo, which I picked up at a small bookstore called LibroMobile in Santa Ana, California. Lastly, on Audible I’m currently listening to Wild Life by Richard Ford. Oh and I can’t forget the book I keep on my nightstand next to my bed: The Adolescent by Dostoevsky. I’m always reading something by Dostoevsky—I want to read all of his works before my days are up.

5. Which author, in your opinion, deserves wider recognition?
I may be biased in my answer for this question because he’s a close friend of mine, but I believe that Héctor Tobar deserves wider recognition. I mean here’s a writer that writes as a journalist, novelist, sociologist, biographer, you name it. And as a Latino, he writes about people and communities that are often overlooked and marginalized. He sheds light on the immigrant experience and on the communities that they create once settled in this country. In his novel The Barbarian Nurseries, for example, the hero of the story is the Latina nanny. To me, that is important. Stories of Latina/os are not being told like those of other groups, and if they are, often they are stereotypical and written by non-Latino/a folk.

6. What is the biggest impediment to your writing life?
The greatest impediment to my writing life now is grading student essays. Any English professor out there will tell you that grading essays is time-consuming. I love my students, but I could live without having to grade their essays. Now if any of them read this, they’re going to say, “Just give me an A.” Can’t do that.

7. What is one thing that your agent or editor told you during the process of publishing this book that stuck with you?
I can’t think of something that my editor told me during the publishing process that has especially stuck with me. But I can tell you that my editor and the entire FSG team have been completely accessible to me from the start. They have made the entire process stress-free and even enjoyable. I thought that I was going to have to do all kinds of restructuring and rewriting, but that was not the case. I didn’t have to change much from the manuscript. And what I did change or remove, they kindly asked me if I was willing to change or remove it. Suffice it to say, it’s been smooth sailing from the start.

8. What is one thing you might change about the writing community or publishing industry?
There is some Spanish sprinkled in my book, and my publisher didn’t have someone in-house who could edit Spanish. And I don’t really know how to write in Spanish. I can spell and create sentences, but I don’t know where the accents go, so I really needed someone to make sure all the accents were in the correct places. Eventually, one of my colleagues edited the Spanish for me, and she was paid by my publisher for her work. But that’s what I would change: the behind-the-scenes demographics. I’d make the publishing industry more accessible to Latino/a writers and editors.

9. Who is your most trusted reader of your work and why?
My most trusted reader is my friend Héctor Tobar. He mentored me throughout the writing of The Death of My Father the Pope. He was also the first person to read the book when it was a manuscript still in its early stages. His honest criticism was crucial to the completion of it.

10. What’s the best piece of writing advice you’ve ever heard?
The best piece of writing advice I’ve ever heard is to be patient and disciplined, to take as much time as a story needs to be completed. If you feel that the story is good and that it needs to be read, then keep at it until you’re happy with it. Although I don’t know that a writer is ever happy with the end result.

“This was the book I was meant to write my whole life.” —Neel Patel, author of Tell Me How to Be

“Thinking is really about 90 percent of the work.” —James Hannaham, author of Pilot Impostor

“I wrote this book with the constraint of honesty.” —Truong Tran, author of book of the other