This week’s installment of Ten Questions features Claire Oshetsky, whose debut novel, Chouette, is out today from Ecco. Tiny, a professional cellist and the narrator of Chouette, has a sense of foreboding about her pregnancy: “This baby is an owl-baby,” she tells her husband. “If I have this baby, it’s going to kill me.” But while Tiny’s fears endure even after she gives birth to her daughter, who does indeed turn out to be an owl, she also loves her fiercely. She resists her panicked husband’s search for treatments and strives to understand her daughter’s own needs and desires. With Chouette, Oshetsky movingly renders the variousness and sweep of motherhood. “Viscous, tender, baffling, and glorious, Chouette is an unforgettable fairy tale that glitters darkly with Oshetsky’s raw and soaring brilliance,” writes Rachel Yoder. “Part love letter, part lament, Chouette astonishes as each perfected sentence burrows deep into the maternal shadows of love, possession, selfhood, and sanity. A bone-deep, breathtaking wonder.” Claire Oshetsky is a novelist whose writing has appeared in the New York Times, Salon, and Wired. She lives with her family in California. Chouette draws on her own experiences of motherhood. 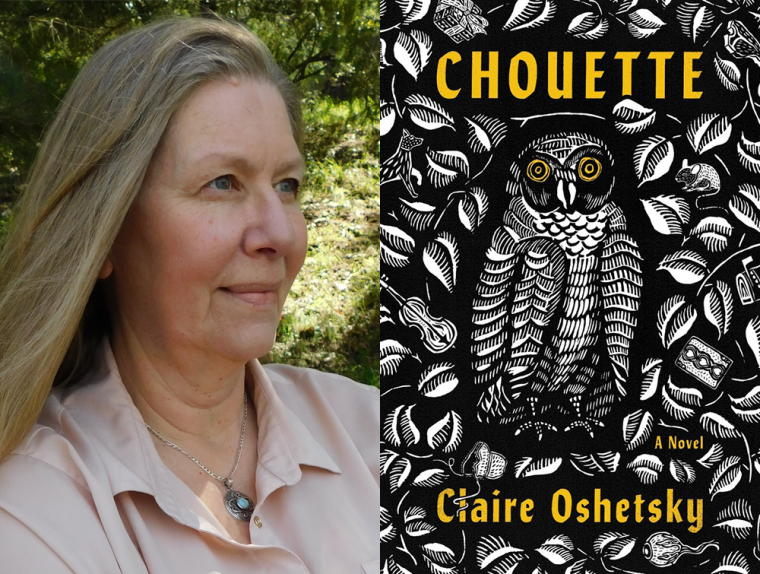 1. How long did it take you to write Chouette?
If I hadn’t kept all the drafts then I might have answered “about three months,” and in a way it’s true. One day I wrote what became the first sentence in Chouette: “I dream I’m making tender love with an owl.” The sentence turned out to be the key that unlocked the entire story, where the rest of the novel almost wrote itself. A more true answer, though, would be that the novel took me nine years to write. There were a lot of false starts.

2. What was the most challenging thing about writing the book?
Without question my greatest struggle was in finding the right voice to tell this story. I’d never written fiction in the first person before, and I really fought against it. The voice of my narrator was a voice I didn’t recognize, and I didn’t know what to make of it, and at first I didn’t trust it. Once I yielded to the way the story apparently wanted to be told, though, it felt as if my protagonist was in the room with me, telling me her story, and that I was just there to take it down. Other writers have also described this feeling, as if they are transcribing stories being told to them by their characters. I’ve always thought the notion was a little fanciful until it happened to me.

3. Where, when, and how often do you write?
Whenever I can write, I write. When I’m deep into a project I need to pull myself away from it and remind myself to sleep and eat. My preferred place to write is in my library, surrounded by my books. I frequently consult the words of other authors as I write. If I’m writing a fight scene, I’ll read eleven fight scenes. I like to study how other authors end chapters, and how they split paragraphs. I try to learn from their beginnings and their endings. Often when I write it feels as if I’m tapping into stored-up memories of favorite words and rhythms in my head—from poems, mostly, that I’ve read in the past and nearly memorized, but not quite. There are bits of T. S. Eliot, E. E. Cummings, Gerard Manley Hopkins, and many other inspirations in Chouette. I like the idea of a reader out there who might be reminded of an echo of a poem or passage they love when they read a certain sentence in my novel.

4. What are you reading right now?
Palmares by Gayl Jones.

5. Which author, in your opinion, deserves wider recognition?
Gayl Jones.

6. What is the biggest impediment to your writing life?
Self-doubt.

7. What is one thing that your agent or editor told you during the process of publishing this book that stuck with you?
“They want to make an offer.”

8. What is one thing that surprised you during the writing of Chouette?
I’ve already mentioned the surprise of Chouette’s first sentence, and the surprise of the novel’s voice. I don’t know if I can ever explain, though, just how flabbergasted I was at the way this sentence and this voice compelled me to write a story that’s steeped in the fantastic, the surreal, and the uncanny. This novel began as a memoir, actually. The plan was to write about my real experiences as the mother of two unique children. I ended up writing a novel about a woman who gives birth to a child, conceived with the help of a giant owl. I was surprised. On the other hand, what I’ve ended up writing seems very close to the truth of my experience as a mother, which was entirely surreal.

9. Who is your most trusted reader of your work and why?
It’s been my everlasting delight to work with my agent Alexa Stark and with my editors at Ecco and Virago, Sara Birmingham and Rose Tomaszewska, to make the novel better than I could on my own. I imagine they will continue to be my first and most trusted readers for upcoming projects. They were extraordinary partners in the creative process, suggesting not just line edits or other smallish changes for clarity, but also encouraging me to try new scenes and to explore new fictional directions. I wrote five different endings! As I recall it, ending number four won out, but I loved the chance to play with many other possibilities and other fates for my characters. I loved the playfulness of the process—the sense that we were trying things out together, just to see what happens, and that we could always back the changes out again if they didn’t work.

10. What’s the best piece of writing advice you’ve ever heard?
The late Jan Morris said: “I believe in the religion of kindness.” Is it writing advice? Not exactly. But I feel kindness in everything Jan Morris wrote, and I try to follow her example and to write from a place of kindness. Kindness to my characters, and kindness to my readers. As I write I always try to keep the idea in mind that we humans must take tender care of one another.

“I was using the text as a future image of what my own life could be.” —Shayla Lawz, author of speculation, n.

“I need to be involved with life, its business, its noise.” —Khadija Abdalla Bajaber, author of The House of Rust