This week’s installment of Ten Questions features Truong Tran, whose seventh book of poetry, book of the other: small in comparison, was published on November 9, 2021. Throughout book of the other, Tran scrutinizes how whiteness has pervaded his life and uses poetry to attempt to wrest back control. At times this feels like an impossible task: “can you call yourself a writer. when everything youve written. feels as though. you have been written.” To combat the racism and gaslighting he experiences, Tran repeats the “facts. because the truth is subject to interpretations. when the white reader of this book. tells you that this couldnt possibly have happened.” With a unique and precise attention to syntax, punctuation, and tense, Truong demands to be seen and begins to plant the seeds of a new narrative for all those who have been othered. “This is witness of whiteness at the scenes of what it refuses to name crimes,” writes Douglas Kearney. “This book is necessary—terribly so. Yesterday, today, and for the foreseeable future.” Truong Tran was born in Saigon, Vietnam. He is the author of six previous books of poetry, including Four Letter Words (Apogee Press, 2008) and 100 Words (Omnidawn, 2021), which he coauthored with Damon Potter. Truong lives in San Francisco and teaches at Mills College in Oakland. 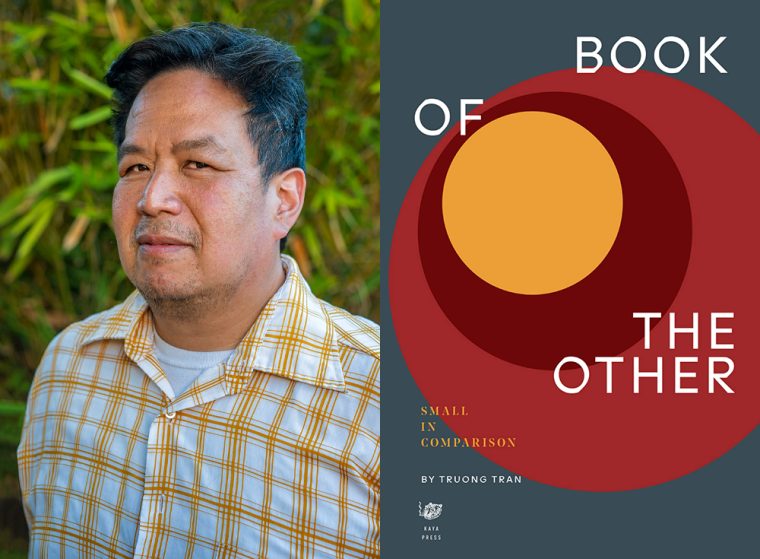 Truong Tran, author of book of the other: small in comparison.

1. How long did it take you to write book of the other: small in comparison?
It’s taken me fifteen years or so to live this book. I guess you can say that it’s taken me just as long to write it. Some microaggression about race happened to you and it gets lodged in your body. You carry it with you through life and one day it gets dislodged when you least expect it to and you play that moment in your head again and again. When something like what happened in the book happens to you, it never stops happening. You live with it, it becomes a part of you. You are looking for a way to put it down. Writing this book became a necessity. What is it about?  I am still trying to put it down even now so I won’t relitigate the subject. I won’t recount what happened. It began on December 9, 2005. I know this for a fact because I went from the university straight to the movie theater where I saw Ang Lee’s Brokeback Mountain. I remember being moved to tears. My friend who watched the movie with me said that she refused to cry for a movie about two white men.

2. What is the earliest memory that you associate with the book?
I had published a version of this book in 2008. It was titled Four Letter Words. It was written in coded language, written from a place of fear. I remember being invited into a classroom to lecture about Four Letter Words. The class was taught by someone I wrote about in the book. It occurred to me while I was lecturing, this individual did not see herself in the book. I knew then that I would have to rewrite the book in no uncertain terms. What I did not know at the time was that the narrative of Four Letter Words would not only be rewritten but also relived. book of the other is a book about race. That memory, the classroom, my lecture about Four Letter Words, they were all about race. It will always be about race.

3. What was the most challenging thing about writing the book?
I wrote this book with the constraint of honesty. This is easier said than done. Honesty meant that I had to come out of hiding. I had to break my silence. I write poetry. I am addicted to metaphors. Honesty meant that I had to write the book without metaphors or at least attempt to do this. I did not entirely accomplish this because the metaphor appears out of habit or necessity. The metaphor is a shelter and as such, it is a luxury. This book cannot afford such luxuries. There is no hiding from the truth, the facts. Inside the book and in the world. There is no hiding for both the writer and the reader.

4. Where, when, and how often do you write?
I have been writing in bed right before I go to sleep and right after I wake up. There is something about writing in this way that feels like the act of putting down the things I carry. I wrote this book as a way of putting down the weight of someone else’s shame. I do most of this writing in bed before sleeping as a reminder that I have a voice, and again in bed before I start the day. I wake up in silence. Writing helps me find my voice. I am always looking for my voice.

5. What are you reading right now?
I’m reading Wanda Coleman’s Wicked Enchantment. I am rereading it for the millionth time. I like to keep her words close by. I miss her.

6. Which author, in your opinion, deserves wider recognition?
Bhanu Kapil is my ride-or-die poet of a lifetime! Her words have a way of giving my writing purpose. The Vertical Interrogation of Strangers changed my perceptions of poetry forever. And her latest book, How to Wash a Heart, is still teaching me how to breathe.

7. What is the biggest impediment to your writing life?
Silence. It has always been silence. Even during the times when I thought that silence was my right and my power. I thought that silence was a withholding that asserted my authority as a writer. Silence as an absence of my language, that in my absence, there would be a need, desire, or demand that my voice is present, my contribution would be seen as a necessity. This is the quandary, no this is the fantasy, no this is the burden of being the immigrant, of being the other. This is the overwhelming hope of belonging. Silence is not just an impediment. It is a lifelong path of obstacles. From a very young age, I knew that I wanted to do the work of writing. I wanted to say something. I just did not know that I had to overcome the work of silencing that was happening to me. Writing these days is about saying what needs to be said.

8. If you could go back in time and talk to the earlier you before you started book of the other, what would you say?
I would offer my earlier self two questions and a demand. Where are you? What are you afraid of? Break something. Use your words and break something now!

9. Who is your most trusted reader of your work and why?
My editor for this book, Sunyoung Lee. She kept on asking the difficult questions. She insisted on clarity when the book needed clarity. She was my editor but also someone who walked right next to me as we walked this book back home. Kaya Press is the only U.S. publisher doing the work of publishing Asian diasporic literature. This book could not have been edited by anyone else. This book could not have been published by any other publisher.

10. What’s the best piece of writing advice you’ve ever heard?
The late Wanda Coleman, who was also a dear friend, once whispered to me, I’m paraphrasing here, “If you allow them to not see themselves, they’ll take it.”

“I was using the text as a future image of what my own life could be.” —Shayla Lawz, author of speculation, n.