This week’s installment of Ten Questions features Mona Awad, whose new novel, Bunny, is published today by Viking. A riveting exploration of female relationships, desire, and the creative and destructive power of the imagination, Bunny is the story of Samantha Heather Mackey, an outsider in the MFA program at New England’s Warren University, a scholarship student who prefers the company of her own dark imagination. Repelled by the rest of her fiction writing cohort, who call one another “Bunny,” Samantha is nevertheless intrigued when she receives an invitation to the group’s fabled “Smut Salon” and she begins a descent into the Bunny cult and their ritualistic off-campus workshop, where the edges of reality start to blur. Mona Awad is the award-winning author of 13 Ways of Looking at a Fat Girl, a finalist for the Scotiabank Giller Prize. The recipient of an MFA in fiction from Brown University and a PhD in English and creative writing from the University of Denver, she has published work in Time, VICE, Electric Literature, McSweeney’s, Los Angeles Review of Books, and elsewhere. 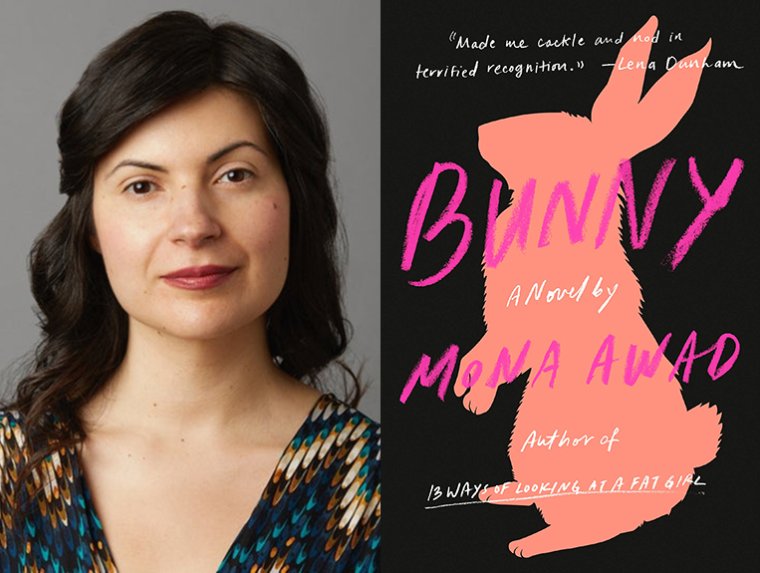 1. How long did it take you to write Bunny?
Two years. Three months to write the first draft and then a year and a half of revision

2. What was the most challenging thing about writing the book?
Not giving up on it. I had a blast writing the first draft of Bunny and just let myself take risks and go down rabbit holes, but in the revision, I had to really reign it in and flesh it out. That took time. It didn’t help that every time I described the novel to someone, I burst out laughing because the story sounded so crazy to me. And then I’d panic. I’d think: what I’m writing is clearly insane. Pushing through that and continuing to embrace the madness of it was scary.

3. Where, when, and how often do you write?
When I’m working on a book, I try to write every morning for at least a few hours. I work in bed, at my desk or in the Writer’s Room of Boston. I’m pretty rigid about it, just because it really does help build momentum with the story and the voice to work on a story every day. Once I feel I’m emotionally inside the world of the story, I begin to work at night too. Towards the end, I work whenever I possibly can.

4. What was the most unexpected thing about the publication process?
Just how much people are interested in reality when we’re talking about fiction, in which parts of the story actually literally happened to you (the author). In some ways, I get it. Fiction is a reflection/refraction of reality, in some ways fiction is the ultimate form of memoir so it makes sense for people to be curious about how much of the writer’s actual life is mirrored in the story, but to me the most exciting things are always the things I make up. In my view, that’s the most telling stuff in the novel, not the stuff that literally maps to something that literally happened.

5. What are you reading right now?
Right now, I’m reading Tea Mutonji’s Shut Up, You’re Pretty and John Waters’s Mr. Know-It-All: The Tarnished Wisdom of a Filth Elder. I’m enjoying them both immensely.

6. Which author, in your opinion, deserves wider recognition?
Russell Hoban. I love the way he weaves the magical into the everyday and I love the way he writes loneliness. The Lion of Boaz-Jachin and Jachin-Boaz is a brilliant work of fabulist fiction, but it’s also a real meditation on the bond between a father and a son, and the desire for and cost of personal freedom. Turtle Diary is wonderful too. It’s just about two lonely people who decide to free a turtle at the London Zoo, but the characters are handled with such empathy, nuance and depth.

7. If you could go back in time and talk to the earlier you, before you started writing Bunny, what would say?
Trust yourself more.

8. Would you recommend writers pursue an MFA?
Depends on the writer, the program and the project. I was very fortunate. My MFA was fully funded and when I started it, I was already halfway finished with my first novel, 13 Ways of Looking at a Fat Girl, which I completed there and turned into my MFA thesis. There was also a writer on the faculty, Brian Evenson, whom I admired deeply and was very keen to work with. So I knew exactly what I planned to do while I was there, I just needed time and space to work, and some guidance and encouragement from a community I could trust. I was also older—in my thirties—when I did it. So although I had lots of growing to do as a writer, I’d already found my voice, knew what I was going to work on and I’d lived a little. I think all of those factors contributed to why it was such a successful experience for me. It might not be the right thing for someone else and I don’t believe that you need it to write.

9. What is the biggest impediment to your writing life?
Me. My own insecurities and impatience and shortcomings that show up when I write. Also my difficulty getting a routine going. My best work comes out of a sustained, daily practice of writing and sometimes that isn’t possible.

10. What’s the best piece of writing advice you’ve ever heard?
Write the shitty first draft. A finished story is better than a perfect story that just lives in your mind. And be curious. So much can come of being willing to shut up and pay close attention to the world around you.

“We have to remind ourselves why we write and why it’s important for us to tell these stories. The universe will take care of the rest.” —Nicole Dennis-Benn, author of Patsy

“I love more than anything to be alone in my imagination, but sometimes it is a dangerous place.” —Domenica Ruta, author of Last Day

“What many people won’t admit is that it’s impossible to write a novel without a pinch of selfishness, and you have to beg your loved ones to forgive you for it.” —Sara Collins, author of The Confessions of Frannie Langton