This week’s installment of Ten Questions features Domenica Ruta, whose novel, Last Day, is out today from Spiegel & Grau. The fates of three sets of characters converge during the celebration of an ancient holiday anticipating the planet’s demise. A bookish wunderkind looks for love from a much older tattoo artist she met at last year’s Last Day BBQ; a young woman with a troubled past searches for her long-lost adoptive brother; three astronauts on the International Space Station contemplate their lives on Earth from afar. Last Day brings these characters and others together as they embark on a last-chance quest for redemption. Domenica Ruta is the author of the New York Times best-selling memoir With or Without You (Spiegel & Grau, 2013). A graduate of Oberlin College, Ruta received an MFA from the Michener Center for Writers at the University of Texas in Austin. Her short fiction has been published in the Boston Review, the Indiana Review, and Epoch. Her essays have appeared in Ninth Letter, New York magazine, and elsewhere. She reviews books for the New York Times, Oprah.com, and the American Scholar, and works as an editor, curator, and advocate for solo moms at ESME.com. She lives in New York City. 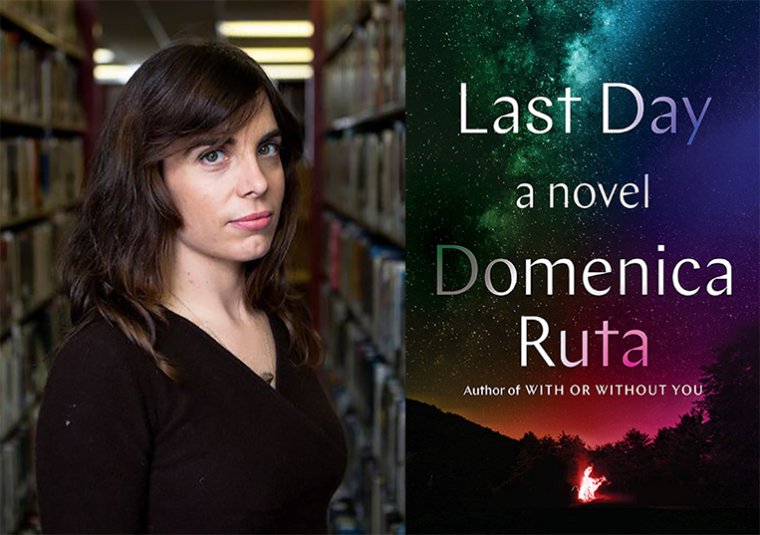 1. How long did it take you to write Last Day?
I started playing around with it immediately after my memoir, With or Without You, was published, but I was also writing another novel at the same time, trying to see which one would win my full attention. When I found out I was pregnant, I began pounding the keys of my laptop every day for a couple of hours to force out an ugly first draft before I became a single mother. In the first six months of my son’s life I wrote nothing. After that I worked a little at a time whenever I could, meaning whenever I could afford childcare. So the short answer is five years, but not continuously.

2. What was the most challenging thing about writing the book?
The most challenging thing for me as an author of this and probably any book I write is the way publishing is a performative act of maturation. Writers grow up in public. If you compare the first book written by your favorite author with one they wrote fifteen or twenty years later the difference in quality is almost always astounding. And this is the same human using the same tools. So it is challenging for me to let go of a work and set it free into the world when I am positive I could still make it better, if only I had a few more decades. But that’s what the next book is for, and the one after that.

3. Where, when, and how often do you write?
I write mostly in bed, with occasional commutes to my kitchen table. I try to write every week, sometimes every day, sometimes not. As a mother of a small child, there is no set schedule. I write when I can, usually when the kid is at school, and other pockets I can find.

4. What was the most unexpected thing about the publication process?
When my publisher and editor, Cindy Spiegel, lost her incredible imprint Spiegel & Grau after a banner year, just a few months before Last Day was published—this was not something I ever expected would happen.

5. What are you reading right now?
In Love with the World by Yongey Mingyur Rinpoche and Secrets We Kept by Kristal Sital.

6. Which author, in your opinion, deserves wider recognition?
Why doesn’t the Octavia Butler estate have ten different Netflix specials in the works right now?

7. If you could go back in time and talk to the earlier you, before you started writing Last Day, what would say?
I wish I had something that would create the mystique of myself as a precious artist, alchemist of verbs and nouns, thinker of Big Thoughts, but to be perfectly honest, if I could go back in time before this novel I would advise myself to get savvy about the whole social media game. It is so important for authors to market themselves and their work in this way, which I was totally oblivious to until very recently.

8. What is the biggest impediment to your writing life?
Self-doubt, self-hatred, self-sabotage; I love more than anything to be alone in my imagination, but sometimes it is a dangerous place.

9. Would you recommend writers pursue an MFA?
Not unless it is fully funded. I cannot in good conscience recommend that anyone without a trust fund or wealthy no-strings-attached parents/patrons go into debt for a degree in the arts. Read every single interview in the Paris Review instead; you will learn there are as many different ways to write a book as there are writers. Read widely across genres and write terrible drafts of things you are ashamed of. But if an MFA program is fully funded, then definitely go. Being a professional student is the most fun job I’ve ever had.

10. What’s the best piece of writing advice you’ve ever heard?
Anne Lamott said something along the lines of “write a shitty first draft.” This is the only way I can summon the courage to write anything. I am human and flawed and this is never more evident than when I see it spelled out in my words on a screen or a sheet of paper. But as bad as that first draft may be—and sometimes it’s not as bad as my first impression of it is—I have a chance to make it better one day at a time. That is the craft. That is what makes a writer: the willingness to rewrite a thousand times if necessary.

“What many people won’t admit is that it’s impossible to write a novel without a pinch of selfishness, and you have to beg your loved ones to forgive you for it.” —Sara Collins, author of The Confessions of Frannie Langton

“One of literature’s great powers is its ability to act as a tonic against xenophobia; there’s never been a moment when that power has been more urgently needed.” —Julie Orringer, author of The Flight Portfolio