This week’s installment of Ten Questions features Julie Orringer, whose third book, the novel The Flight Portfolio, is out today from Knopf. Based on the true story of Varian Fry, a young New York journalist and editor who in 1940 was the head of the Emergency Rescue Committee, designed to protect artists and writers from being deported to Nazi concentration camps and to send intellectual treasures back to the United States, The Flight Portfolio returns to the same territory, Europe on the brink of World War II, that thrilled readers of Orringer’s debut novel, The Invisible Bridge. Andrew Sean Greer calls it “ambitious, meticulous, big-hearted, gorgeous, historical, suspenseful, everything you want a novel to be.” Orringer is also the author of the award-winning short story collection How to Breathe Underwater, which was a New York Times Notable Book. She lives in Brooklyn. 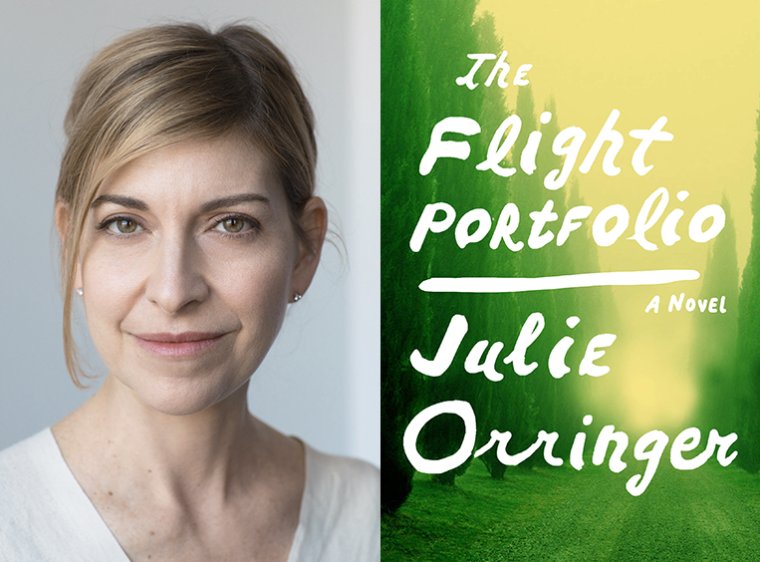 1. How long did it take you to write The Flight Portfolio?
Nine years, more or less. While researching my last novel, The Invisible Bridge, which also took place during the Second World War, I read about the American journalist Varian Fry’s heroic work in Marseille: His mission was to locate celebrated European artists who’d fled to France from the Nazi-occupied countries and arrange their safe passage to the States. The job was fraught with moral complications—given limited time and resources, who would Fry choose to save?—and the historical account seemed to miss certain essential elements, particularly those surrounding Fry’s personal life (he had a number of well-documented relationships with men, a fact that historians elided, denied, or shuddered away from, as if to suggest that it’s not acceptable to be a hero of the Holocaust if one also happens to be gay).  Researching Fry’s life and mission took the better part of four years—a time during which I moved three times and gave birth to my two children—and writing and revision occupied the five years that followed. Which is not to suggest that no writing occurred during the initial research, nor that there was ever a time when the research ceased—it continued, in fact, through the last day I could change a word of the draft.

2. What was the most challenging thing about writing the book?
Undoubtedly it was the research into Fry’s work in Marseille, a detailed record of which exists in biographies, interviews, letters, ephemera, and even still in living memory: Fry’s last surviving associate, Justus Rosenberg, is a professor emeritus of languages and literature at Bard College, and was kind enough to speak to me about his experiences. Twenty-seven boxes of Fry’s letters, papers, photographs, and other writings reside in the Rare Books and Manuscripts collection at Columbia’s Butler Library; I spent many hours immersed in those files, learning what I could about what kept Fry up at night, what obsessed him by day, what he struggled with, how he triumphed, and how he thought about his own work years later.  I spent a year at the Radcliffe Institute at Harvard, where Fry studied as an undergraduate; there I had the chance to examine his recently unsealed student records, which include not only his grade transcripts and his application, but also letters from his father, his professors, the dean, and various close associates, many of them arguing either for or against Fry’s expulsion from Harvard for a variety of infractions that included spotty attendance, raucous partying, destruction of school property, reckless driving, and, ultimately, the placing of a For Sale sign on Dean Greenough’s lawn. Then there were the dozens—hundreds, ultimately thousands—of Fry’s clients, whose lives and work I felt I must know before I wrote the book.  And of course I had to go to Marseille, where I visited the places Fry lived and worked, at least those that still exist (the marvelous Villa Air Bel, where he lived with a group of Surrealist writers and artists, was razed decades ago).  The nearly impossible task was to clear space among all that was known for what could not be known—space where I could make a narrative that would honor Fry’s experience but would move beyond what could have been recorded at the time.

3. Where, when, and how often do you write?
I write five or six days a week at the Brooklyn Writers’ Space. I’m married to another fiction writer, my former Iowa MFA classmate Ryan Harty, and, as I mentioned, we have two young children; we have a carefully worked-out schedule that allows each of us a couple of long writing days each week (eight hours or so) and a number of shorter ones (five hours). Often I write at night, too, especially if I’m starting something new or working on a short story or a nonfiction piece.

4. What was the most unexpected thing about the publication process?
The inestimable benefit of sharing a very early draft with my editor, Jordan Pavlin. Jordan edited my two previous books, but I’d never before shown her anything that hadn’t been revised six or seven times. This novel involved so much risk, and took so long to complete, that I felt I needed her insight and support long before I’d written three or four versions. Did the novel strike the right balance between history and fiction? Had I captured the characters’ essential struggles clearly? How to address problems of pacing, continuity, clarity? Jordan’s exacting readings—not just one, but three or four—echoed my own doubts and provided necessary perspective and reassurance. And her comments pulled no punches. She was scrupulously honest. She was rigorous. She challenged me to do better. And my desire to meet her standards was, as it always is, fueled as much by my ardent admiration for her as a human being as by my deep respect for her literary mind.

5. What trait do you most value in an editor?
See above.

6. What are you reading right now?
Susan Choi’s Trust Exercise, which cuts a little too close at times to my own 1980’s experience in a high school drama group—one that took itself at least as seriously as Choi’s Citywide Academy for the Performing Arts. She hits all the notes with dead-on precision: favoritism toward certain students by charismatic teachers, intrigue surrounding highly-charged relationships, endless quoting of Monty Python, jobs at TCBY, the dire importance of having a car and/or friends with cars, etc. But the true brilliance of the book is its structure: A first section in which the subjective experience of high school students is rendered with respect and utter seriousness; a second section that brings a questioning (and revenge-seeking) adult sensibility to bear upon the first; and a third section that sharpens the earlier sections into clearer resolution still, suggesting the persistent consequences of those seemingly trivial sophomore liaisons.

7. Which author, in your opinion, deserves wider recognition?
Here are three new writers whose work I’ve found risk-laced, challenging, and full of fierce delights: Ebony Flowers, Rona Jaffe-winning cartoonist and disciple of Lynda Barry, whose brilliant debut short story collection, Hot Comb, will be published by Drawn and Quarterly in June; shot through with tender and intelligent humor, it’s an incisive examination of cultural and familial tensions in black women’s lives. Domenica Phetteplace is another of my favorite new writers; her marvelous short story “Blue Cup,” a futurist skewering of commerce-driven life in the Bay Area, involves a young woman whose job requires her to deliver tailored social experiences to clients at an exclusive dining club; the story is narrated by the artificial intelligence software that co-inhabits her mind. And Anjali Sachdeva’s All the Names they Used for God is a story collection that merges the real and the supernatural with genre-breaking bravery, employing a prose so precise that you follow her into marvelous realms without question: Ice caves, exploding steel mill furnaces, an ocean inhabited by an elusive mermaid whose fleshy, tentacle-like hair still haunts my dreams.

8. What is one thing you’d change about the literary community and/or the publishing business?
I’d love to see more works in translation published in this country—for more publishing houses to commit seriously to the cultivation and dissemination of international literature.  I admire the work of New York Review Books, Restless Books, and Europa Editions in this arena. I loved, for example, Restless Books’ recently published translation of Marcus Malte’s The Boy, a Prix Femina-winning novel about a young man who spent the first fourteen years of his life in mute isolation in the wilds of France. The story of this young man’s entry into the early twentieth-century world—first into a rural setting, then Paris, and finally the battlefields of the First World War—is the story of what makes us human, and casts our world in a stark new light. Even stories as place-specific as The Boy have much to reveal about all our lives; and, just as importantly, they illuminate and particularize the vast array of human experiences different from our own. One of literature’s great powers is its ability to act as a tonic against xenophobia; there’s never been a moment when that power has been more urgently needed.

9. What is the biggest impediment to your writing life?
The finite nature of the twenty-four-hour day. But places like the MacDowell Colony and Yaddo, the New York Public Library’s Cullman Center and the Radcliffe Institute for Advanced Study, seek to explode that limitation by removing barriers to creative freedom.  At MacDowell, where every artist gets a secluded studio, meticulously prepared meals, and unlimited uninterrupted time to work, there’s a kind of magical speeding-up of the creative process. You don’t necessarily fail less often; you fail faster, and recover faster. The people who dedicate their professional lives to the running of those programs are literature’s great guardians and cultivators.

10. What’s the best piece of writing advice you’ve ever heard?
It would be impossible to identify the best, because I’ve been the fortunate recipient of much wonderful advice from writers like Marilynne Robinson, James Alan MacPherson, Tobias Wolff, Elizabeth Tallent, and John L’Heureux, for more years than I care to consider. But I can tell you about a piece of advice I chose not to take: A prominent writer once told me, at a barbecue at a friend’s house in Maine, that if I wanted to take myself seriously as a writer, I’d better reconsider my desire to have children. For each child I had, this writer told me, I was sacrificing a book. Now I can say with certainty that my writing life has been immeasurably enriched and transformed by having become a parent. And if parenthood is demanding, both of time and emotional energy—as of course it is—life with children reminds me always of why writing feels essential: At its best and most rigorous, it illuminates—both for writer and reader—the richness and complexity of the human world, and forces us to make a deep moral consideration of our role in it.

“It’d be nice if the American literary community’s obsession with signal-boosting the optics of diversity were solidified into a tangible, fiscally remunerative reality for minority writers.” —Bryan Washington

“I’d love the community of contemporary writers to read each other with the freedom and rigor (vigor) we bring to hearing the music we love the most.” —Ed Pavlić