This week’s installment of Ten Questions features Sara Collins, whose debut novel, The Confessions of Frannie Langton, is out today from Harper. Both a suspenseful gothic mystery and a historical novel, Collins’s debut tells the story of a slave’s journey from a Jamaican plantation to an English prison, where she is tried for a brutal double murder she cannot remember. “With as much psychological savvy as righteous wrath, Sara Collins twists together slave narrative, bildungsroman, love story, and crime novel to make something new,” wrote Emma Donoghue. Sara Collins grew up in Grand Cayman. She studied law at the London School of Economics and worked as a lawyer for seventeen years before earning a master’s degree in creative writing at Cambridge University, where she was the recipient of the 2015 Michael Holroyd Prize for Creative Writing. She lives in London. 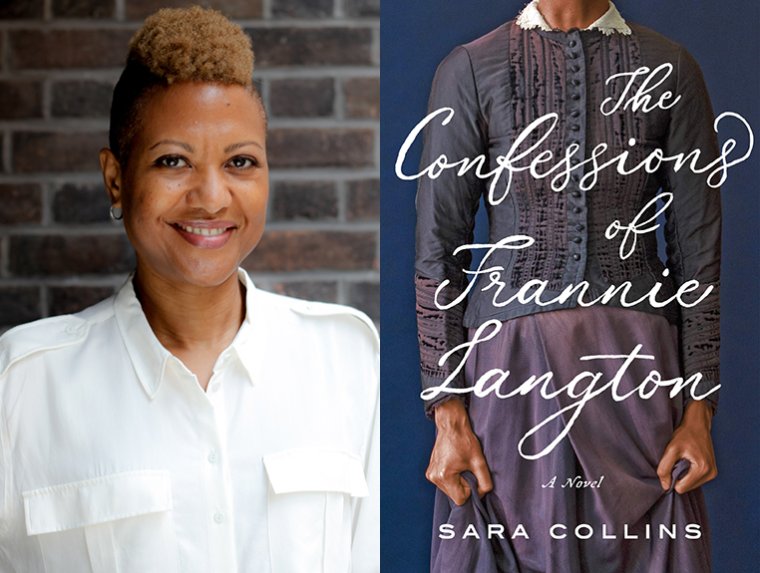 Sara Collins, author of The Confessions of Frannie Langton.

1. How long did it take you to write The Confessions of Frannie Langton?
My agent signed me with only a partial manuscript, and I had to write feverishly in order to finish it in just under two years. But the novel had been simmering for all the decades I’d spent wondering why a Black woman had never been the star of her own gothic romance. My dissatisfaction about that state of affairs grew so strong over time that it finally nudged me in the direction of writing my own.

2. What was the most challenging thing about writing the book?
At times there was nothing more terrifying than the distance between the novel in my head and the one making its way onto the page. I had to force myself to accept the failure of my first attempts. I’m always terrified that the rough and rambling sentences that come out first, as a kind of advance party, will be all I can manage. They trick me into trying to polish them as I go. And that slows me down.

3. Where, when, and how often do you write?
Either at my desk overlooking a quiet canal patrolled by iguanas in Grand Cayman or at my kitchen table in London overlooking my courtyard garden, and now sometimes in bed, to avoid the intense back pain I get after sitting for long periods. When working on a novel, I write every day, 8:00 AM to 7:00 PM, following very strict routines: starting and finishing at the same time, and aiming to get a certain quota of work done. Over time I’ve developed a Pavlovian response to my rituals: When I take the first sip of coffee at 8:00 AM, my brain flips a switch and I’m in writing mode.

4. What was the most unexpected thing about the publication process?
I wrote the novel in isolation, but I’ve now done numerous radio and podcast interviews, panel and bookshop appearances, essays and columns. Writing requires withdrawal, publishing demands engagement. It’s the shock of wandering out of a tunnel onto a stage.

5. What are you reading right now?
I’m reading Clarie Messud’s The Woman Upstairs. The writing feels electric and alive, crackling with anger, which I think we should have more of in novels. One of my top reads of recent months was André Aciman’s Call Me By Your Name. I’m going to start John Banville’s The Book of Evidence next.

6. Which author, in your opinion, deserves wider recognition?
James Baldwin. He is unparalleled: as a writer, as an intellectual, as a man. Yes, he’s fairly widely recognized, but it should be wider.

7. What is one thing you’d do differently if you could have a do-over?
I would definitely take more days off.

8. What is the biggest impediment to your writing life?
When I’m so immersed in a project that I don’t want to look up, let alone talk to anyone, I feel like I’m being pulled between novel and family. What many people won’t admit is that it’s impossible to write a novel without a pinch of selfishness, and you have to beg your loved ones to forgive you for it.

9. What trait do you most value in an editor (or agent)?
Each of my editors, and my agent, saw straight through my manuscript to the novel I wanted to write, not the one I’d written.

10. What’s the best piece of writing advice you’ve ever heard?
I often quote Annie Lamott quoting the coach in Cool Runnings (a film I dislike, but which apparently produced this great line): “If you weren’t enough before the gold medal, you won’t be enough afterwards.”

“One of literature’s great powers is its ability to act as a tonic against xenophobia; there’s never been a moment when that power has been more urgently needed.” —Julie Orringer, author of The Flight Portfolio

“I wish our books, as art objects, had better ways of showing more of the practice and work and failure that go into making them.” —Geffrey Davis, author of Night Angler.