This week’s installment of Ten Questions features Kai Cheng Thom, whose latest book, I Hope We Choose Love, will be published on Thursday by Arsenal Pulp Press. In alternating essays and poems, Thom both critiques and reimagines contemporary activism. Documenting her own desire to be “good,” she speaks broadly to the intoxicating pursuit of ideological purity among activists, and the ways in which these obsessions engender fear and ultimately discourage the community from noticing and naming harm. In candid analysis of her own missteps and those of her immediate communities, Thom models the possibility of engaging with failures and moving forward. She makes the case for meeting the self and others with a radically open heart—with love. To embrace love, in all its inevitable pitfalls, might build a community that can last. “What would it take to build a community where we were really safe?” Thom asks. “Not perfectly, rigidly safe in the sense of totally free from risk—because such a thing is not possible in this life—but safe enough to pursue intimacy and adventure with the knowledge that there really was a community that had our backs?” Kai Cheng Thom is also the author of a poetry collection, a place called No Homeland, and a book for young readers, From the Stars in the Sky to the Fish in the Sea. Her debut, Fierce Femmes and Notorious Liars: A Trans Girl’s Confabulous Memoir, won the Dayne Ogilvie Prize and was named a Lambda Literary Awards finalist. 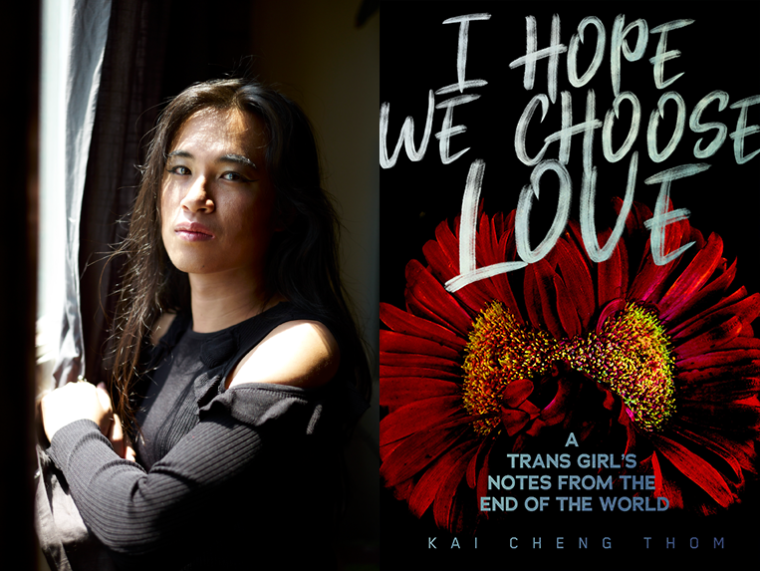 Kai Cheng Thom, author of I Hope We Choose Love.

1. How long did it take you to write I Hope We Choose Love?
It took a year for the project to come together after my publisher asked for it, but the pieces in the book span from up to about five years old to less than a year. Quite a few of my books are like that—woven together from old bits and pieces combined with newer work.

2. What was the most challenging thing about writing the book?
This book is extremely personal as it is largely autobiographical. It also dives into some highly sensitive and politically charged topics, such as suicide and intimate partner violence, while taking a bit of a radical stance on those topics. All that to say, I’m a bit nervous putting it out in the world!

3. Where, when, and how often do you write?
I used to write every day, everywhere—at work, in transit, at home in the middle of the night. I wrote at a furious pace. I’ve slowed down quite a bit these days, which is probably for the best in terms of my health.

4. What are you reading right now?
Lots of young adult fiction and fantasy novels—my first loves when it comes to genre. I’m currently finishing The Border Keeper, a fantastic novella from Tor by Kerstin Hall.

5. Which author, in your opinion, deserves wider recognition?
There are a great many, but one is the children’s author Laurence Yep, who was prolific throughout the 1980s and 1990s. His work was well-recognized at the time, but he seems to have slipped out of the public consciousness, which is too bad. His work deeply inspired me and many other authors of the Chinese diaspora.

6. What is one thing you might change about the writing community or publishing industry?
Well, imagining that I had unlimited powers over the shape of the universe, I would take capitalism out of the equation. The demand to constantly commodify not only our work as writers, but also our personalities in the age of social media, is something that is deeply detrimental to the integrity of the writing community.

7. What is one thing that your agent or editor told you during the process of publishing this book that stuck with you?
I wasn’t agented at the time that the book was contracted for, but my editor, Shirarose Wilensky, did suggest some fairly significant shifts to the structure of I Hope We Choose Love, which I think changed the manuscript for the better.

8. Who is your most trusted reader of your work and why?
I don’t trust any readers! And readers shouldn’t trust any writers. We’re all scoundrels, down to the last. More seriously, though, I would say that while I have had some very wonderful and supportive readers—mostly friends and editors—my experience of having a readership is that our readers often struggle to see us as real human beings, because the writer-reader relationship is an idealistic one while in-person relationships are realistic. The two aren’t compatible, and this can lead to disappointment on both sides.

9. What is the biggest impediment to your writing life?
Capitalism! Capitalism and the coercive nature of a social system that demands that we constantly produce so-called value that is extrinsic to our foundational value as human beings.

10. What’s the best piece of writing advice you’ve ever heard?
This is from the young adult fantasy author Tamora Pierce’s website from back in the mid-2000s: I’m paraphrasing here, but I believe Pierce says that any actual piece of writing with actual words in it is always, always better than an imagined piece of writing that we tell ourselves that we are going to do as soon as the inspiration strikes, or as soon as we have the right teacher, or as soon as we know enough to “get it perfect.” Our works on the page are real, flaws and all. The “perfect” works in our mind are not.